For Immediate Release
Office of the Press Secretary
November 8, 2007

Fact Sheet: Keeping America's Promise to Those Who Have Defended Our Freedom

THE PRESIDENT: Thank you all very much for having me here today. If anybody were to come to this center, they would have to leave inspired and thankful, inspired by the servicemen and women who are recovering from wounds with such courage; thankful that there are instructors and preachers and volunteers who are helping these people get back on their feet and getting their lives together. 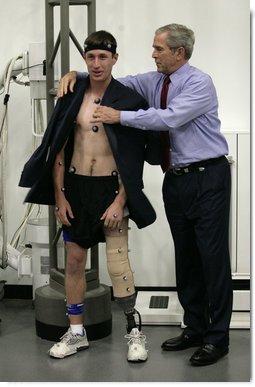 This center was funded entirely by contributions of more than 600,000 Americans through what's called the Intrepid Fallen Heroes Fund. This center is a tribute to the generosity of the American people. Make no mistake about it, the American people support the men and women who wear our nation's uniform. This center is a testament to our deep belief that someone wounded in the defense of America needs all the help he or she can get. The servicemen and women here have borne the burdens of battle. They have kept our country safe. We honor them and their families by helping them with all we can.

I am here to highlight one of the world's top rehabilitation facilities -- right here in my home state of San Antonio, Texas. It's a partnership between the private sector and the federal government. The Center for the Intrepid makes use of the best available technologies to give severely injured service members and amputees the opportunity to lead full and productive lives. That's the mission. The mission is to take a good man who I've met before, and help him live a full and productive life.

This facilities include a pool, a -- where's my man? There he is -- a wave runner. By the way, this guy from Oklahoma handled those waves pretty well. An indoor running track, a two-story climbing wall, a prosthetics center, a virtual driving program that teaches patients how to control an automobile -- that was my driver, right there -- a fully-furnished apartment that helps patients learn to adjust to disabilities in the real-life world.

This center also provides compassionate support for the families. The Fisher House program -- and I want to thank the Fishers for joining us today -- provides on-site housing for up to 57 families, where they're here to visit their injured loved ones. The Fisher family that has supported the Fisher houses is a remarkable family, and these good folks represent the true spirit of America -- people coming forth to help a neighbor in need. Real proud you both are here.

Medical advances have enabled facilities such as this one to provide wounded warriors with care that would have been unimaginable just a decade ago. The technology that's being used here is state of the art. Our system for managing the care, however, has fallen behind. The technology has advanced. Our system needs to be modernized. 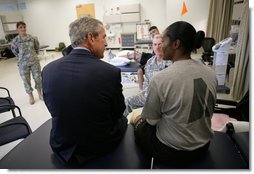 And so at my request, I asked Senator Bob Dole, former Secretary of Health and Human Services Donna Shalala to analyze the issue, to look at the problem, and to come up with specific recommendations for modernizing and improving our system of care. They came up with recommendations, and I strongly support them, and so should the United States Congress.

Now, many of the recommendations require administrative action, and that's precisely what this administration is doing. For example: Over the next few weeks, the first Federal Recovery Coordinators will be hired. These Coordinators will guide seriously wounded service members through their recuperation. We don't want people to fall through the cracks of care. We don't want people to be confused by the system. We want people's families to be comfortable with the care that their loved one is receiving, and therefore we'll have these specially trained people to stay with a person throughout their rehabilitation.

A pilot program to establish a single comprehensive disability exam is underway. This replaces the two difficult -- two different, difficult exams that service members must currently undergo through the Defense and Veterans Affairs Departments separately. It makes no sense. Somebody gets hurt, there ought to be one exam, not two. The whole purpose is to analyze somebody to make sure that they get that which they're entitled to as quickly as possible, without confusion.

We're working to aggressively prevent and treat Post-Traumatic Stress Disorder and Traumatic Brain Injury. A new National Center of Excellence for PTSD and Traumatic Brain Injury has just hired its first staff members and moved into temporary offices. The purpose is to develop best practices. The real purpose is to make sure we help those coming out of combat to be able to adjust to real life as a civilian. 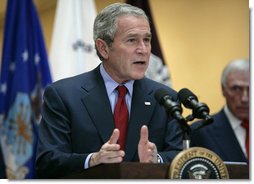 The Defense Department is working to ensure that the best health professionals are kept on duty at Walter Reed. There's some concern, since Walter Reed will be shut down, that Walter Reed is not going to have the best there is. They don't have to worry about it. We'll make sure that those at Walter Reed are incented to stay there until there's a new facility opened in Washington, D.C.

And tomorrow the Department of Veterans Affairs will initiate two studies that will help provide the information necessary to modernize the veterans' disability system. The system needs to be modernized, and I want to make sure our men and women coming out of combat in Afghanistan and Iraq have a modern disability system. And that's what the studies are going to do.

Some of the recommendations put forward by Dole-Shalala commission require legislative action. And we're working with the Congress. I look forward to having quick action by the Congress on the Dole-Shalala commission recommendations, just like I expect the United States Congress to get the Veterans Affairs appropriations bill to my desk. Now, look, there's obvious some disagreements between me and the Congress, but there's no disagreement over the amount of money we're going to spend for veterans. And they need to get the bill -- to do their job. They need to get the bill to the desk of the President as a standalone piece of legislation, so the veterans of this country understand that we're going to support them.

Our country is inspired by Americans that we find in facilities like this. Christian Bagge is a guy I met over here at the hospital. I'll never forget looking at Christian's eyes, and wondering whether or not he was going to make it. See, both his legs were blown off, and he didn't look good. I knew he'd get the best possible care. I knew that this government would do everything we could to help him heal, and after talking to him for a minute, I realized he had the courage necessary. He told me one thing -- he looked at me, he said, Mr. President, you don't need to worry about me; someday I'm going to come to the White House and run with you on the South Lawn. I looked at him and said, come on, Christian; I'll be ready when you are, not sure whether or not this good man would really be able to do it; certain he wanted to, but unsure. And if you'd have been in my position, you would have, too. After all, he'd just come off the battlefield and lost both his legs. 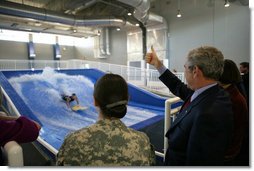 The spirit of America is strong in facilities like this. Our country is a remarkable country that has produced men and women who volunteer to protect our nation in the face of danger. And there's no better example of finding those type of citizens than right here; citizens who have shown incredible courage; citizens who love our country; and citizens whose resolve is inspiring.

And so I appreciate you letting me come by. May God bless you all. (Applause.)