For Immediate Release
Office of the First Lady
November 7, 2007

MRS. BUSH: Thank you very much, Chancellor Hance. Thank you for that very kind introduction. We were sort of reminiscing as we walked in. Thirty years ago neither one of us would have ever predicted we would have been here together. (Laughter.) Thank you so much.

And thanks to each and every one of you and the whole Texas Tech community for this wonderful honor. I can't imagine anything I'd rather be associated with than the good health of women -- especially West Texas women. So thank you all so much. (Applause.) 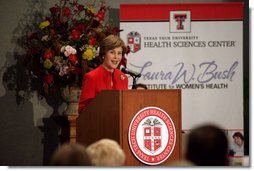 Dr. Baldwin, it's great to see you, and I'm so happy that you're with Texas Tech now. And Dr. Jenkins, that was terrific to hear you. And I'm so excited with your enthusiasm, and I know you'll really do a really wonderful job as the Executive Director of the Laura W. Bush Institute for Women's Health. Mayor, thank you very much for joining us today.

For three and a half decades, Texas Tech's health centers have improved the lives of men, women and children across the western part of our state. In an area that's traditionally been underserved by health care facilities, the University provides quality education, research and care for hundreds of thousands of patients. Together, your School of Nursing, Graduate School of Biomedical Sciences, School of Pharmacy, School of Allied Health Sciences, and School of Medicine reach patients across a service area of 131,000 square miles. Of course, in West Texas, that's just a tight-knit campus. (Laughter.)

As Texas Tech researchers and doctors advance our medical understanding, you're making sure that all West Texans benefit from these advances -- both men and women. Many of today's biggest threats to public health -- like obesity, osteoarthritis and depression -- are more common in women than they are in men. And a whole range of health concerns are unique to women -- from devastating illnesses like cervical and ovarian cancer, to the joys of pregnancy and motherhood, to the less-than-joyful experience of menopause. (Laughter.)

In 2000, the University established the Women's Health Research Institute as a community-wide effort to improve women's health through research and education. You're committed to reaching West Texas populations that may not have had access to health care -- like minorities, immigrants, low-income and rural patients, and the elderly. You're encouraging the next generation of doctors and scientists to devote their talents to women's health.

And across the Institute's campuses at Amarillo, El Paso, Lubbock and the Permian Basin, and Tech's campuses at Abilene and Dallas, you equip Texas women with the knowledge they need to benefit from the life-saving resources at Texas Tech.

Here on the Amarillo campus, the Hablando de la Salud de la Mujer Symposium, one of only five bilingual women's health programs in the nation, plans to reach more than 800 Hispanic women in 2008. Every year the Institute partners with the Delta Theta Sorority, an American-American women's organization, to provide speakers, health information and free health screenings to African-American women.

Institute professionals offer health evaluations that have diagnosed severe osteoarthritis in women who don't even know what that is. Women have discovered that they have diabetes from your blood glucose screenings. Often you provide the first mammogram a woman has ever had, frequently detecting breast abnormalities, which can then be treated. At the Institute's Hispanic symposium, an elderly woman had a blood pressure of 220/115 -- stroke-level blood pressure. Institute doctors immediately sent her to the ER where she could be treated. These are just some of the ways Texas Tech Women's Health Institute educates women about the steps they can take to save their own lives.

And when it comes to women's health, education and prevention are often the only cure we have. Prevention and early detection are the most effective ways to save women's lives from breast cancer, which accounts for more than one in four cancers diagnosed in American women.

Just this year, breast cancer will claim the lives of more than 40,000 women. We know, though, that when breast cancer is detected early, the five-year survival rate in the United States is 98 percent. Texas Tech programs encourage all women to get regular mammograms and to conduct regular breast self-exams. 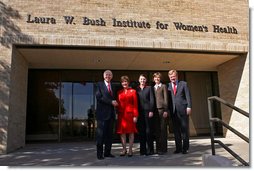 In 2002, the National Heart, Lung and Blood Institute joined with the Department of Health and Human Services to launch the Heart Truth awareness campaign. And nothing draws attention like a red dress, so this is the "Heart Truth's" symbol. Women had no idea that idea that heart disease was the leading cause of death among American women. They think that a heart attack is a man's disease. So if their husband suffers symptoms associated with a heart attack, they rush them to the emergency room, of course. But if they suffer symptoms associated with heart attacks, they think maybe it's anxiety or maybe if they just go lie down they'll feel better. And so they get to the hospital much -- not nearly as quickly as men do, which is one of the reasons they suffer more heart damage than men do from heart attacks.

Women have started to realize, though, that heart disease is the number-one killer of women. They've started to hear about the symptoms, and in many cases, the symptoms are different -- not the crushing chest pain that we associate with men, but a lot of times a pain in the jaw or a pain in the back or pain in the neck that are not so associated with a heart attack. And if women now notice any of these symptoms, they do get to the hospital in time to make sure they can save their own lives.

In Indianapolis, an emergency room nurse named Tara Kunkel admitted a woman in her 70s who was complaining of chest pain. The woman said she'd gone to the hospital because just the day before, she'd read an interview I gave describing the signs and symptoms of heart attacks in women.

Twenty minutes after she arrived at the hospital -- and less than an hour after her symptoms began -- this patient's heart went into a fatal rhythm that without treatment would have killed her. But because this woman knew about the symptoms of heart disease, she got herself into the hospital in time to save her life.

I got a letter from this nurse, who thanked me for letting American women know what these symptoms are, because that woman was so happy that she'd happened to read these symptoms right before she had them.

With the outstanding education and community outreach work taking place here at Texas Tech Women's Health Institute, hundreds of thousands of women in West Texas will benefit from your world-class research and care. You're reaching the women who are too busy taking care of their own kids, taking care of their jobs, and taking care of everyone else to take care of themselves -- and you're encouraging them to take charge of their own health. I'm honored that you've named this institute for me, and I'm proud of the very important work you do every day to save women's lives. 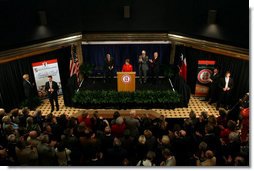