For Immediate Release
Office of the Press Secretary
November 6, 2007

PRESIDENT BUSH: Mr. President, distinguished guests: Laura and I offer you a warm welcome to the White House -- or should I say: Bienvenue a la Maison Blanche. (Applause.)

In 1777, another George W. welcomed to America another Frenchman. His name was Lafayette. The two leaders built a strong friendship, based on common values and common virtues. They both recognized the power of human freedom. They both served with courage in freedom's cause. And they both anticipated that freedom would advance in other lands following its victory here in America. 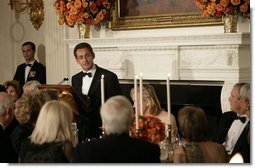 Two centuries later, our two nations are honoring their legacy of Lafayette by helping others resist tyranny and terror. French and American troops are helping to defend a young democracy in Afghanistan. Our two nations support the democratic government of Lebanon. We agree that reconciliation and democracy in Iraq are vital to the future of the Middle East. And our two nations condemn violations of human rights in Darfur, in Burma and around the world.

France and the United States can meet great challenges when we work together, Mr. President. You and I share a commitment to deepen the cooperation of our two republics -- and through this cooperation, we can make the world a better place.

I look forward to our discussions at Mount Vernon, where George Washington welcomed his friend, Lafayette. And in the spirit of their friendship, I offer a toast to you -- and to some of America's oldest friends, the free people of France.

PRESIDENT SARKOZY: (As translated) Mr. President, Mrs. Laura Bush, ladies and gentlemen, it is indeed an honor to be welcomed here, with such pomp, but also with such warmth -- a warmth that is so characteristic of you both, that makes this place, this house, a place where each and every French man and woman feels indeed truly welcomed.

One feels welcomed and good in this place, but I'm equally aware of the fact, as you, George, have reminded us on several occasions, that in the White House one is only passing through. And that applies to both of us who have been elected as we have by democratic universal suffrage.

Our two peoples throughout our history have been through some of the worst trials and tribulations one can imagine. From Yorktown to Omaha Beach and, lastly, in Afghanistan, our common destiny is that of two peoples who believe in freedom, who want freedom, and who are prepared to struggle for freedom together. Yes, George, when we have stood together, the French people and the American people together, we have undertaken and won some of the toughest battles one can imagine. 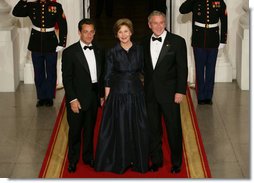 Earlier on, I wished, and I did, decorate some of the great heroes, the American veterans who fought in the second world war, those heroes of the Greatest Generation. And I wanted to tell them that we in France will never forget what they did for us, ever. What I wanted to say is this: I wanted the American people to know that these simple people, these simple heroes were men, young men, who came to die upon our shores for something that they believed in, and that never will any French man or woman forget that. In my country there are thousands upon thousands of white crosses to remember those men who didn't know France, and yet who came to die on French soil. And I want to tell you that whenever a U.S. soldier dies anywhere in the world, I think of what the Americans and -- the American army and Americans have done for us.

Our peoples resemble one another, and they admire each other. And that is precisely why they have this strong bond, an impassioned relation which is not simple, but it is always beautiful. And I also came to say that one can be a friend of America, and yet win elections in France. (Laughter and applause.)

We have many other, many other challenges to face. I think in particular of terrorism. On 9/11 terrorists thought that they had brought, or they could bring America to its knees. And I will tell you that, seen from the French perspective, never has America seemed so great, so proud, so admirable as on 9/11. And on 9/11, we, all of us, were proud of America and the Americans.

We need to take up a challenge of nuclear proliferation, of religious extremism and of fanaticism. And we need to respond to the demands and challenges of peoples who wish to claim their rightful place in a new world, the world of the 21st century -- and a new order, that of the 21st century, which is no longer the order of the 20th century. And we need also, together, to find a new balance between man and nature, in order that we may save this planet of ours -- and not only save it, but leave it as a legacy to our children in a better state than that in which we found it. Together we must vanquish abject poverty, because it is on abject poverty that terrorism worldwide feeds.

So here I am in Washington on a first Tuesday in November. (Laughter.) Now, I have no electoral ambitions when it comes to the U.S. -- (laughter) -- even though I know it's a very special day because it's the day on which Americans elect their President. So allow me to celebrate the memory and pay tribute to the long line of American Presidents who have always put forward, who have always given priority to the friendship between our two countries. 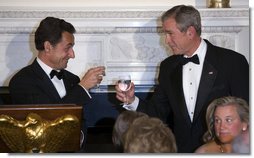 George talked about Lafayette and he talked about George Washington. Bear with me as I recount this anecdote. To President John Quincy Adams, who was welcoming Lafayette in these self-same walls, in this self-same house, on the occasion of his 66th birthday, and broke with the customs, the protocol of the time, suggested to the general -- to the French general that they drink a toast, as he said, to the 22nd of February and to the 6th of September, which were the birthdays of Washington and of Lafayette, himself.

On the onset of that, Lafayette responded, "No, let there be no toast to my birthday, or even to that of George Washington. Let us raise our glasses and toast the 4th of July, which is the day that liberty was born." And you know, for all of us, liberty is exemplified and symbolized by America. For those of my generation, America was not the country that promised liberty and freedom; it is the country that gave liberty and freedom.

Ladies and gentlemen, I would invite you, therefore, to raise your glasses, and let us drink to the health of President George Bush, and if you would allow me, madam, to you, Mrs. Laura Bush, and to the alliance between our two peoples. And I say the following words from the bottom of my heart: Long live Franco-American friendship. Long live the United States. Long live France. 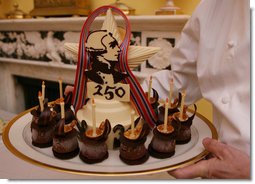