Citations Recipients of the Presidential Medal of Freedom


The President on November 5, 2007 awarded the Presidential Medal of Freedom. The text of each recipient's citation reads as follows:

Gary S. Becker
One of the world’s great economists and premier intellectual innovators, Gary Becker has broadened the spectrum of economic theory and social science.  His pioneering analysis of the interaction between economics and such diverse topics as education, demography, and family organization has earned him worldwide respect and a Nobel Prize.  His work has contributed to public policies that have helped improve the standard of living in developed and developing nations.  The United States honors Gary Becker for his groundbreaking contributions to economics, which have helped us better comprehend the dynamic forces that drive our economy and shape our society. 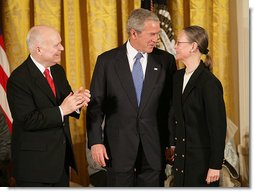 Oscar Elias Biscet
Oscar Elias Biscet has dedicated his life to advancing human rights and democracy in Cuba.  A medical doctor, he has been persecuted for his peaceful calls for a free Cuba.  Despite being imprisoned for his beliefs, he remains a powerful advocate for a Cuba in which the rights of all people are respected.  Freedom-loving people everywhere are his brothers and sisters, and his sacrifice benefits all mankind.  The United States stands with Oscar Elias Biscet in his heroic struggle against tyranny, salutes him for his courage, and honors him for his devotion to freedom and human rights.

Francis S. Collins
Francis Collins’ work has revolutionized genetic research and deepened our understanding of human biology.  Under his leadership, the Human Genome Project mapped and sequenced the full human genome.  This monumental advance in scientific knowledge has begun to unlock some of the great mysteries of human life and has created the potential to develop treatments and cures for some of the most serious diseases.  The United States honors Francis Collins for his efforts to decode human DNA and improve human health.

Benjamin L. Hooks
As a minister, lawyer, judge, and public servant, Benjamin Hooks has dedicated his life to equal justice under law.  A pioneer of the Civil Rights movement and a leader of the NAACP, he fought to extend the full promise of America to all its citizens, and he battled injustice with civility, grace, and a generous spirit.  His efforts have helped bring our Nation closer to its founding ideals.  The United States honors Benjamin Hooks: champion of equality, opportunity, and justice.

Henry J. Hyde
A veteran, a lawyer, and a public servant, Henry Hyde has served his country with honor and dedication.  During his 32-year career in the House of Representatives, he was a powerful defender of life, a leading advocate for a strong national defense, and an unwavering voice for liberty, democracy, and free enterprise around the world.  A true gentleman of the House, he advanced his principles without rancor and earned the respect of friends and adversaries alike.  The United States honors Henry Hyde for his distinguished record of service to America.

Brian P. Lamb
As the driving force behind the creation of C-SPAN, Brian Lamb has elevated our public debate and helped open up our government to citizens across the Nation.  His dedication to a transparent political system and to the free flow of ideas has enriched our civic life.  He has helped empower Americans to know and understand their government and hold it accountable.  The United States honors Brian Lamb for his efforts to ensure that his fellow citizens are well-informed participants in the American system of self-government through reflection and choice.

Harper Lee
Harper Lee’s beautiful book is a meditation on family, human complexity, and some of the great themes of American life.  At a critical moment in our history, To Kill a Mockingbird helped focus the Nation on the turbulent struggle for equality.  The novel became an instant American classic and earned her a Pulitzer Prize.  Nearly half a century after its publication, her work continues to captivate new readers who encounter its compelling power for the first time.  The United States honors Harper Lee for her outstanding contribution to the great literary tradition of America.

Ellen Johnson Sirleaf
As a Liberian Cabinet Minister, United Nations administrator, and Liberia’s President, Ellen Johnson Sirleaf has been a force for democracy and opportunity.  She has helped heal a country torn apart by over fourteen years of conflict through perseverance, personal courage, and an unwavering commitment to building a more hopeful future for her homeland.  The first woman elected president of an African nation, she has striven to improve the lives of people in her own country and across her continent.  The United States honors Ellen Johnson Sirleaf for her dedication to freedom, democracy, and human dignity.