For Immediate Release
Office of the Press Secretary
November 2, 2007

THE PRESIDENT: I want to thank the Governor and the senators and members of Congress for joining me.

I first do want to say how concerned Laura and I are for the families who lost loved ones at the fire in Ocean Isle Beach, North Carolina. I know people are hurting when they think about the seven youngsters who had so much hope in their lives and had their life taken during that fire. I hope the families and loved ones can take comfort that in this great state and around the nation there's a lot of people praying for them. 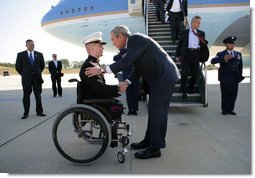 I'm proud to stand with Senator Lindsey Graham. I've gotten to know him well. He deserves to be reelected to the United States Senate from South Carolina. He's tough, he is smart, he bases his votes on conservative principles. And Senator Graham, I'm proud to call you friend and I believe the people of South Carolina benefit from your leadership as the senator from this important state.

Lindsey Graham understands that low taxes work when it comes to growing this economy. Earlier this week we had the reports that pro-growth economic policies that Senator Graham supports are making a difference for America -- after all, the third quarter numbers were strong. Today we had further good news -- that keeping taxes low works. This economy added 166,000 new jobs during the month of October, which is now our 50th consecutive month of uninterrupted job growth -- the longest in the nation's history. I appreciate your strong support for keeping taxes low on the working people in South Carolina, Senator.

And finally, I appreciate his work on the Judiciary Committee in the United States Senate. I told the people of South Carolina if I became the President of the United States that I would put people on the bench who would strictly interpret the Constitution and not legislate from the bench. I've kept that pledge. I've had no stronger supporter in the United States Senate than Lindsey Graham for putting good judges on the bench. The people of this state have got to understand that when I nominated John Roberts and Sam Alito, there was no better ally than Lindsey Graham to see to it that these two good men were confirmed.

There's going to be another fight on the Senate floor coming next week. The Senate Judiciary Committee has agreed to vote on the nomination of Michael Mukasey to be the Attorney General. And Senator Graham, I appreciate your strong support for Mike Mukasey. He's a good man, he's a fair man, he's an independent man, and he's plenty qualified to be the Attorney General. And I strongly urge the United States Senate to confirm this man, so that I can have an Attorney General to work with to protect the United States of America from further attack.

Proud to be with you, Senator. I strongly believe the people of South Carolina should send you back to the United States Senate.