For Immediate Release
Office of the First Lady
October 31, 2007 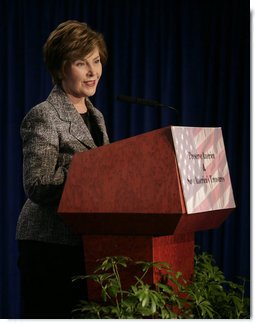 Other members of Congress who have joined us here, congressional staff, state and local officials, historians, preservationists, community representatives, distinguished guests -- thank you for coming and thank you for your interest in Preserve America and Save America's Treasures.

We're gathered in a perfect place to talk about historic preservation. The Sewall-Belmont House became the headquarters of the National Women's Party in 1929, and is an enduring monument to the women's campaign for equal voting rights. (Applause.) The Sewall-Belmont collection contains decades of women's history. In 1974, Congress decided these treasures were worth preserving, and they designated the Sewall-Belmont House as a National Historic Site. Today, all of us -- and thousands of yearly visitors -- are grateful that this historic building, and these historic documents, have been preserved.

In communities across the United States, structures like the Sewall-Belmont House stand as testaments to our nation's history. President Bush and I want to ensure that our historic properties, artifacts and communities throughout the nation continue to be preserved and enjoyed by future generations. That's why we started the Preserve America Initiative -- to promote cultural and natural preservation, and to encourage greater appreciation of our national heritage.

Since President Bush announced the initiative, we've honored 16 outstanding preservation projects with Preserve America Presidential Awards. For the last three years, Preserve America has recognized an outstanding History Teacher of the Year. Last year, at the Preserve America Summit -- which was held on the 40th anniversary of the National Historic Preservation Act -- businesses, foundations, educational institutions, governments and private citizens came together to learn how we can improve our preservation efforts so they'll be more effective for the future.

One of the benefits of becoming a Preserve America community is eligibility to apply for a Preserve America grant. With support from the Congress, the Department of the Interior has awarded $10 million in matching grants to 140 preservation programs and projects across the United States.

The Mount -- Edith Wharton's former home in Lenox, Massachusetts -- is a historic preservation project that won a Preserve America Presidential Award last year. But the project, the excellent preservation of The Mount, was made possible with the help of a nearly $3 million grant from Save America's Treasures.

The Mount is a great example of how Save America's Treasures and Preserve America complement each other. One program -- Save America's Treasures -- provides grants to rescue individual landmarks or artifacts, and the other -- Preserve America -- encourages citizens to improve access to their local treasures for the benefit of all Americans. These programs are working together to encourage historic preservation in more than 90 communities across the United States.

Since 1998, with the support from the federal government -- and through the generosity of private citizens -- Save America's Treasures has awarded more than $300 million to over 1,000 preservation projects in all 50 states.

Projects funded by Save America's Treasures represent some of the most cherished icons of American history and culture. They include Thomas Edison's Invention Factory in New Jersey, and the centuries of natural and human history carved into the cliff sides of Mesa Verde National Park. They include Central High School in Little Rock, where nine African-American students stood up for equality, and they include the bus where Rosa Parks fought for civil rights by remaining in her seat.

This great preservation initiative was established by another First Lady -- and I'd like to thank Senator Clinton for her work as founding chair of Save America's Treasures.

President Bush and I appreciate the broad, bipartisan support Congress has shown for both Preserve America and Save America's Treasures. And I'm delighted that legislation is being introduced authorizing these two very important preservation programs. The new bill -- the "Preserve America and Save America's Treasures Act" -- will improve our ability to protect America's historic places, objects and collections. This legislation will authorize competitive grants under both programs, and help make sure that these two initiatives become a permanent part of our federal preservation efforts.

You'll hear more about the bill from its House and Senate sponsors in just a minute.

About 75 miles from here is the small town of Gettysburg, Pennsylvania. Gettysburg's rich history -- which dates from the 1780s -- is vital to the town's economy. Americans began making the pilgrimage to Gettysburg just a few months after the three-day battle in 1863 -- and today, these visitors spend about $312 million dollars a year in this town.

Local citizens understand their obligation to preserve their historical treasures for the benefit of our whole nation. Gettysburg and the National Park Service have partnered to develop the Gettysburg Interpretive Plan -- which will enhance the educational experience for visitors to Gettysburg National Military Park, and turn The Wills House -- where Lincoln spent the night before delivering the Gettysburg Address -- into a Lincoln Museum.

The centerpiece of Gettysburg preservation efforts is its historic railroad station. Right after the battle, the station was used to evacuate the wounded and to bring desperately needed supplies to treat Union and Confederate injured. Months later, the station welcomed President Lincoln just before he delivered the Gettysburg Address. With the help of a $125,000 Save America's Treasures grant, the historic railroad station has undergone a massive rehabilitation, and will reopen as a downtown interpretive center and museum.

And this year, Gettysburg and Adams County will benefit from an $80,000 Preserve America grant for the Pennsylvania Civil War and Underground Railroad Project. With these resources, Gettysburg will start preparing for the Civil War Sesquicentennial and the 150th anniversary of the signing of the Emancipation Proclamation in 2013.

With the help of Save America's Treasures and Preserve America, the town of Gettysburg will make sure its local historical treasures can be used to educate all Americans about the Civil War, and African Americans' struggle for equality and freedom. As the town historian Dr. Walt Powell explains, "The people of Gettysburg know we can't take this history for granted -- because we know that Gettysburg's story is America's story." I'd like to recognize the Gettysburg people who are with us -- the Mayor and others. Would you all stand? (Applause.) Thank you all.

With the legislation introduced this week, we can make sure more communities and historical sites across the United States are protected for our children and our grandchildren. I'd especially like to thank the sponsors of this legislation -- Congressman Brad Miller of North Carolina, Senator Hillary Clinton of New York and Senator Pete Domenici of New Mexico -- as well as all of the co-sponsors for their strong support. And thanks to each and every one of you for your dedicated work for the history of our country.

Now I'd like to tell -- now to tell us more about the Preserve America and Save America's Treasures Act, I'd like to introduce the bill's Senate sponsor, Senator Pete Domenici. (Applause.)