For Immediate Release
Office of the Press Secretary
October 30, 2007

THE PRESIDENT: Caring for our military veterans is a solemn responsibility of the federal government. It is our enduring pledge to every man and woman who puts on our nation's uniform. And it is the daily work of the Department of Veterans Affairs. I am pleased to announce my nomination of an Army doctor and combat veteran who will be a strong new leader for this department: Lieutenant General James Peake. (Applause.) 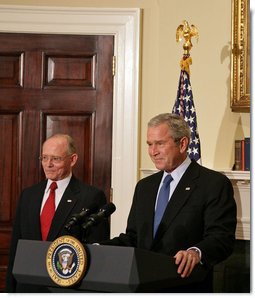 Public service is a family commitment, and I'm especially grateful to Dr. Peake's wife, Janice -- a fellow Texan -- who is with us today. I appreciate you supporting Jim once again as he does the nation's work. I'm also proud to welcome Kimberly and Thomas. Thank you all for coming. We just met in the Oval Office and there's no question in my mind they're certainly proud of their dad.

Dr. Peake grew up in a home where service to country was a way of life. His father started out as an enlisted man in the Army, and became an officer who spent most of his 30-year career in the Medical Service Corps. Doctor Peake's mom was an Army nurse. His brother was a naval aviator. And as a young man of 18, he set upon his own lifetime of service when he arrived at the United States Military Academy.

After graduating from West Point in 1966, Second Lieutenant James Peake was sent to Vietnam with the 101st Airborne. There he served as a platoon leader, he led men in combat, and earned several medals for his courage -- including the Silver Star. One of those who knows him best describes his leadership this way: "End of a chow-line officer -- everyone else first."

In Vietnam, he also earned two Purple Hearts. While in the hospital recovering from his second wound, he learned that he had been accepted to medical school. And after completing his medical studies at Cornell University, he devoted his career as an Army doctor to improving care for our wounded servicemen and women. Long before the global war on terror began, Dr. Peake was changing the way we deliver medical care to our troops. As a result of his reforms, many who once might have died on the battlefield -- now they come home to be productive and having fulfilling lives.

As a medical officer and combat vet who was wounded in action, Dr. Peake understands the view from both sides of the hospital bed -- the doctor's, and the patient's. He brought that understanding to many jobs. These jobs include command surgeon in the Army hospitals, commanding general of the largest medical training facility in the world, and Army Surgeon General -- where he commanded more than 50,000 medical personnel, oversaw 16 hospitals across the world, and managed an operating budget of nearly $5 billion.

Since leaving the Army, he has served as Executive Vice President and Chief Operating Officer of Project Hope. There he helped one Navy hospital ship respond to the victims of the Asian tsunami and another that was sent to care for those hit by Hurricane Katrina. Most recently, he has served as Chief Medical Director and Chief Operating Officer with QTC Management, which provides military veterans with timely medical examinations, as well as electronic medical record services.

When confirmed by the Senate, Dr. Peake will bring his unique set of skills and experiences to the Department of Veterans Affairs. He will be the first physician and the first general to serve as Secretary. He will apply his decades of expertise in combat medicine and health care management to improve the veterans' health system. He will insist on the highest level of care for every American veteran.

One of Dr. Peake's first tasks as Secretary will be to continue to implement the recommendations of the Dole-Shalala Commission on Wounded Warriors. And Senator, thank you for joining us. Some of their recommendations are the responsibility of the executive branch, and Dr. Peake will be a leader in carrying them out. Others require the approval of United States Congress, and that's why this month I sent a bill to Capitol Hill that will make those recommendations the law of the land.

As Secretary of Veterans Affairs, Doctor Peake will be a powerful advocate for the prompt enactment and implementation of this vital legislation. And he will work tirelessly to eliminate backlogs and ensure that our veterans receive the benefits they need to lead lives of dignity and purpose.

In all these ways, Dr. Peake will build on the fine records of Secretary Jim Nicholson and Secretary Tony Principi. Jim is a West Point man who knows the meaning of duty, honor and country. He's a Vietnam vet and a former ambassador and a good friend. I thank him for his service and I thank his wife, Suzanne, as well, and wish them all the very best.

Principi is with us. It's good to see you, friend; thanks for coming. He's a graduate of one of our military academies -- although it's not West Point, it's the Naval Academy. Like the other two men here today, he is a combat veteran of Vietnam. And like the other two, he has served our veterans with dignity and integrity. And I appreciate your service.

Jim and Tony can be proud of their record at the Department of Veterans Affairs. Under their leadership, federal spending for veterans increased by more than two-thirds. We extended treatment to a million additional veterans, including hundreds of thousands returning from Iraq and Afghanistan. We expanded grants to help homeless veterans across the country. These men have worked well with the VSOs and I thank the leaders for joining us here today. Dr. Peake is going to work well with you, too.

And speaking of working well, it's time for the Congress to do its job for the veterans. Congress needs to send me a clean VA appropriations bill that I can sign into law by Veterans Day.

I want to thank Acting Secretary Gordon Mansfield for leading the department these last few weeks. (Applause.) He's done a fine job. He's earned the respect of all those who've worked under him. He's earned the gratitude of our nation's vets.

I appreciate Dr. Peake's willingness to step forward at this important time for the department. He' a man who' been tested in battle; he has proved himself as a soldier, as a physician, as a leader and as a good family man. He will be a superb Secretary of Veterans Affairs, and the United States Senate should promptly confirm him.

Doctor, I appreciate you stepping up again. On behalf of the United States of America, congratulations. (Applause.)

DR. PEAKE: Mr. President, Secretary Mansfield, Secretary Principi, Senator Dole, ladies and gentlemen, thank you very much for being here. And sir, thank you for this opportunity to come back in service. Fundamentally, I'm a soldier. I've been taking care of soldiers essentially all of my adult life. And to have that chance again, especially at this time -- at a time when the American people and you, Mr. President, have so clearly committed to the well-being of those who have served -- well, it's a high honor indeed.

I do understand that though it's an honor, this is not an honorary position, and there's a lot of work to be done as we move forward on implementing the Dole-Shalala commission recommendations. The disability system is largely a 1945 product -- 1945 processes around a 1945 family unit. About everybody that has studied it recently said it is time to do some revisions.

I am really proud of the military medics who have done such remarkable things, in terms of bringing wounded soldiers back home -- soldiers that in other conflicts would never have made it off the battlefield. I think each of these men and women deserves the right to lead as full and productive a life as is possible. This great VA system of ours reaches across the nation into every community and touches veterans and their families in so many ways, committed to the principle that I just talked about.