For Immediate Release
Office of the First Lady
October 26, 2007

Mrs. Bush's Statement to the Press After a Tour of Petra
Petra, Jordan

MRS. BUSH: We've just had a really wonderful tour of a little bit of what's here at Petra. It's been a really unbelievable chance for us to have the chance to be here in Jordan and see one of the Seven Wonders of the World now -- Petra.

I'm with Barbara Porter, who is from ACOR, the American Center for Oriental Research, and Sulieman, who is the director of the entire Petra area. Is that right, Sulieman? And so we've had a really interesting chance to hear from the experts about a lot of the excavations and the other things that have been found over the last couple of decades. 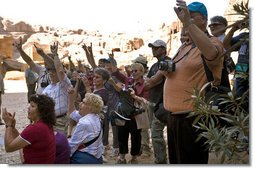 This specific excavation is funded in part by USAID. It's one of the things that the United States funds -- obviously working with the government of Jordan, one of these really precious archeological sites that is part of Jordan.