For Immediate Release
Office of the Press Secretary
October 26, 2007

THE PRESIDENT: Good morning. I went out to California yesterday to meet with families affected by the wildfires, and to thank the state and local officials for their outstanding work in this difficult time. While I was there I saw the terrible destruction and heartbreaking loss. Yet I was also encouraged by the spirit I found -- the families determined to rebuild, the volunteers who stepped forward to help neighbors in need, and the first responders who have shown such courage in battling the flames and caring for those who were displaced. 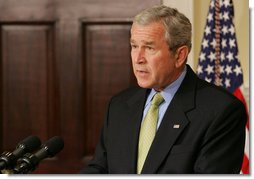 I returned to Washington late last night. And when I got back to the White House, I was disappointed by what Congress had been doing -- and even more disappointed by what they had not been doing. This week, the majority in the House passed a new SCHIP bill that costs more over the next five years than the one I vetoed three weeks ago. It still moves millions of American children who now have private health insurance into government-run health care. It raises taxes to pay for it. And it fails to do what needs to be done: to put poor children first.

After I vetoed their last SCHIP bill, I designated members of my administration to work with Congress to find common ground. Congressional leaders never met with them. Instead, the House once again passed a bill that they knew would not become law. And incredibly enough, the Senate will take up the same bill next week, which wastes valuable time.

As the House was debating SCHIP, the Chairman of the Ways and Means Committee unveiled a massive tax package that raises taxes on more than a million small business owners, among others. Earlier this week, Congress sent me a fiscally irresponsible water resources bill. The House version came in at $15 billion. The Senate version came in at $14 billion. So the House and Senate compromised -- and sent me a bill that costs $23 billion. In Washington, they call that "splitting the difference."

And today Congress set a record they should not be proud of: October the 26th is the latest date in 20 years that Congress has failed to get a single annual appropriations bill to the President's desk. And that's not the only thing congressional leaders have failed to get done.

They have yet to make the Internet tax moratorium permanent, or even extend it -- even though this moratorium is set to expire in just a few days. The House and Senate have both passed temporary extensions but have not agreed on a final bill. I urge Congress to keep the Internet tax-free -- and to get a bill to my desk that I can sign.

They have yet to move Judge Michael Mukasey's nomination to be Attorney General out of the Senate Judiciary Committee -- even as members complain about the lack of leadership at the Department of Justice.

They have yet to act on our emergency war funding supplemental -- even though our troops on the front lines depend on these vital funds to fight our enemies and to keep us safe at home.

This is not what congressional leaders promised when they took control of Congress earlier this year. In January, one congressional leader declared, and I quote: "No longer can we waste time here in the Capitol, while families in America struggle to get ahead." He was right. Only a few weeks left on the legislative calendar -- Congress needs to keep their promise, to stop wasting time, and get essential work done on behalf of the American people.