For Immediate Release
Office of the First Lady
October 25, 2007

MRS. BUSH: Thank you very much, Your Royal Highness. Thank you both very much for being here with me, and thank you for the very kind introduction, and for your important humanitarian work at the King Hussein Cancer Foundation. 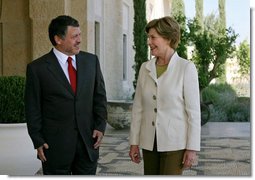 Doctors, nurses, researchers, government officials, community leaders, survivors and distinguished guests -- thank you very much for this warm welcome to Jordan. I'm delighted to be here in Amman to talk about how we can work together to save women's lives -- by raising women's awareness of breast cancer.

Over the next quarter-century, an estimated 25 million women around the world will be diagnosed with breast cancer. People from every country must share their knowledge, resources and experience, because this disease affects women in every country.

Americans have a national experience with breast cancer advocacy and awareness. Twenty-five years ago in the United States, women were too embarrassed and fearful to talk about breast cancer. Women didn't know to get regular mammograms or to do breast self-exams. And so most of breast cancer cases were diagnosed too late for treatment.

But a lot has changed in 25 years. Today people do talk about breast cancer -- often, to tell stories of triumph. In 1982, my friend Nancy Brinker started the Susan G. Komen Foundation in honor of her sister Susan, who had died of breast cancer. Because of the Komen Foundation's work to raise women's awareness, everyone in the United States now knows what the pink ribbon stands for. And every year, in 114 cities around the world, more than a million runners join in the Komen's Race for the Cure.

As in the United States, people in the Middle East -- people like you -- are speaking up to save women's lives from this disease. The American people are proud to stand with you.

Last year I helped launch the U.S.-Middle East Partnership for Breast Cancer Awareness and Research. This program joins medical and community organizations from Jordan, Saudi Arabia and the United Arab Emirates with the medical expertise of the University of Texas M.D. Anderson Cancer Center. This partnership will benefit from the education resources of the Susan G. Komen for the cure and the strong commitment of the United States Department of State. 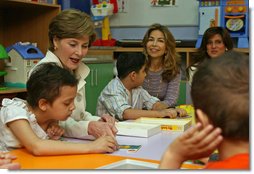 Through this partnership, these institutions will initiate awareness campaigns and share discoveries and data that can lead to world-class research. The cure for breast cancer can come from a researcher in Washington or a young doctor in Amman. Wherever the cure is discovered, it will help women all over the world.

When the U.S.-Middle East Partnership was launched in Jordan six months ago, your country had already begun promising work to raise women's awareness of breast cancer, and to improve women's access to good medical care.

Because of the strong foundation already set by forward-looking Jordanians like Princess Ghida and Dina, the partnership of Jordan has accomplished a lot in just six months. By collaborating with M.D. Anderson, the King Hussein Cancer Center has expanded its services and research, and boosted its international reputation while providing essential breast cancer screening for Jordanian women.

M.D. Anderson, one of the world's leading cancer hospitals, has hosted King Hussein staff in an oncology conference in Houston. Twenty-nine of M.D. Anderson's top faculty are serving as advisors to doctors and scientists in Jordan. Three of these M.D. Anderson faculty members are now visiting the hospital: Dr. Banu Arun, Dr. Ana Gonzalez Angulo, and Sarah Taylor. Three doctors are here. Are you here in the room? There they are. Thank you all. (Applause.) Thanks to each of you for contributing to this important dialogue between Jordan and the United States.

Today the partnership in Jordan is taking another step. We're just about to unveil the King Hussein Center new breast cancer screening facility, which will be a model for the rest of Jordan. One great component of this new center will be a program to expand the King Hussein Cancer Foundation's community outreach, and to educate women about the importance of early detection and treatment. This program, organized by the Foundation and Susan G. Komen for the Cure, will increase women's awareness, encourage volunteerism, and train Jordanians to become advocates for women's health.

Most important, this partnership will renew hope for breast cancer patients across the Middle East -- women like Maha Kalaji. Maha first discovered her breast cancer in 1993 during a routine monthly breast self-exam. Over several months, Maha underwent a grueling course of chemotherapy, surgery and radiation at a British clinic and M.D. Anderson Cancer Center in Texas.

After she returned home to Jordan, she checked in yearly at M.D. Anderson and received a clean bill of health. But in 1999, an MRI showed that her cancer had metastasized. Over the last eight years, she's undergone increasingly aggressive treatments. She personifies the U.S.-Middle East Partnership for Breast Cancer Awareness. She receives chemotherapy here at King Hussein Cancer Center, but she continues to also get checkups in Houston at M.D. Anderson.

Maha says her morale has always remained high. She volunteered abroad at the hospitals where she was treated, and she started Jordan's first breast cancer support group here at King Hussein Cancer Center. Maha has broken the silence, discussing her experience on Jordanian and international TV, and in newspapers and magazines from around the world. She knows that her own story of survival has helped other women confront their own diagnosis. "After 15 years of battling cancer," she says, "here I am." (Applause) Is she here?

Through the U.S.-Middle East Partnership for Breast Cancer Awareness and Research, women can find the support and the treatment and the hope to live with breast cancer. Today I'm happy to announce that the U.S.-Middle East Partnership will reach more women. The announcement today is that we're going to expand to Morocco, to the Palestinian Territories, and to Egypt next year. With one and a half million in funding from USAID, women in these countries will benefit from community screening and awareness activities. And they'll benefit from the Komen Foundation's message: that regular mammograms and self-exams lead to early detection, which is the closest thing we have to a cure.

I wish the women of Morocco, the Palestinian Territories and Egypt the very best as they prepare to launch these initiatives in their countries and territories. And I thank each one of you for your commitment here in Jordan to saving women's lives from breast cancer.