For Immediate Release
Office of the First Lady
October 25, 2007

And thanks to each and every one of you here. Thank you for your very warm welcome. I'm the one who should be applauding you for what you've done. You've earned the respect and the gratitude of the American people -- including, and especially, your Commander-in-Chief. Thank you all very, very much. (Applause.) 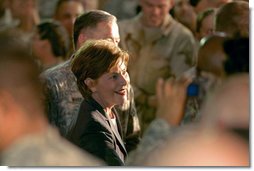 Ali Al Salem is the first base where American and Kuwaiti flags were flown together. This is the perfect place to recognize the friendship between Kuwait and the United States -- and to thank all of the Kuwaitis who support our American Armed Forces.

And of course, I'm thrilled to be with the soldiers, sailors, airmen and Marines here at "The Rock," especially since it's a nice, refreshing 95 degrees outside. (Laughter.) I think this a cold front.

The work our troops do here on "The Rock" is vital to our mission in the Middle East. You work long shifts to provide top-notch missile defense, combat rescue and support, medical evacuation, and air surveillance. Through the Theater Gateway, you provide the fuel, water, food, ammunition, transportation, repair parts, and building supplies for our combat troops in Iraq and Afghanistan.

You're the protectors of our most valuable military resource: the brave men and women of America's Armed Forces. Working together, Army Task Force 1146 and the 386th Air Expeditionary Group move our servicemen and women in and out of Afghanistan and Iraq on the way to the front, and on their way home.

It's your job that you do with extraordinary professionalism and skill. Each year, more than 700,000 personnel move through this base. These soldiers, sailors, airmen and Marines usually spend less than 24 hours on the ground before being flown to their destination. I know your efforts are especially appreciated by troops heading for R&R.

Your efficiency is also appreciated by our troops eager to get into Iraq and Afghanistan to achieve their mission: defending the United States of America. I want to thank you, all of you who've just come back from Iraq and Afghanistan. I know it's difficult to be away from home and family -- to miss those birthdays and holidays, to miss the first day of school. But through Operation Iraqi Freedom and Operation Enduring Freedom, you're keeping your loved ones -- and millions of Americans -- safe at home. We're grateful for your service.

At the heart of your mission to protect America's freedom is securing the freedom of others. Because of our men and women in uniform, 50 million people who once lived in tyranny can now choose the future direction of their countries -- and their own lives. In Afghanistan, millions of children -- including girls -- can now go to school. In Iraq, dictatorship has made way for democracy.

We're seeing signs of progress. As thousands of Iraqis are stepping up to work with coalition soldiers, Iraqis are providing intelligence and information on al Qaeda and other violent groups in their neighborhoods, and bringing security and stability to their communities. Brave young Iraqis are defying terrorists to join the army and police forces.

Local tribes that were one year ago fighting us and ignoring the central government are now cooperating with coalition soldiers. They're engaging with the Iraqi government, and they're joining the political process. Iraqis can make these strides toward self-government because of improved security -- security provided by the men and women of the United States military.

Around our country, President Bush and I meet with your families. We meet with families who make such a huge sacrifice in service to our country. In military hospitals, we meet with soldiers who've been wounded in combat. From our troops and your families, the President and I hear the same request: that we honor the sacrifice of our men and women in uniform by seeing your mission through. They ask the American people to stand with our troops. I'm here to tell you that the American people stand with our troops. (Applause.)

And no matter what you might read in the newspaper, people do appreciate the gift of freedom. Because of the sacrifices our troops made in the early 1990s, Kuwait today is a prosperous nation making important strides toward democracy. Two years ago, Kuwaiti women achieved the right to vote. Yesterday, I met with women political leaders who are working to expand their representation in Kuwait's parliament.

During our meeting -- more than 15 years after American troops helped drive Saddam Hussein's army from Kuwait -- a Kuwaiti government official told me: "We will never, ever forget" America's liberation of Kuwait. "It's engraved in our hearts and in our history books." (Applause.)

Our troops today in the Middle East will also build a historic foundation of friendship between America and the countries where you serve. My trip to the Middle East has been devoted to the work of the U.S.-Middle East Partnership for Breast Cancer Awareness Research. Through this initiative, American cancer hospitals will join with cancer hospitals here in the Gulf area to expand research -- to find out why there's a higher incidence of breast cancer diagnosed at a younger age across the Middle East.

And the initiative will work to raise awareness of breast cancer and help women across the Middle East take charge of their own health -- by seeking screenings so that they can detect cancer in its earliest stages.

As I've met with the women in this partnership, I've seen how much the people of the Middle East want to build better lives for themselves, their families, and their fellow citizens. They want the same things Americans want: good health, and opportunity for success for their children.

You are helping people across the Middle East make these things possible. With your courage and compassion, you show that the United States military is one of the greatest forces for good in the world. (Applause.)

Earlier this month, here in Kuwait, two of our men in uniform were driving southbound on Highway 30 when they witnessed a devastating car accident. Captain Jim Dodd and Lieutenant Phillip Compean rushed over to the car, where they found the passenger and the driver severely wounded.

The only medical supplies the officers had were in their standard-issue first-aid pouches. So they used a PVC pipe to make a splint and a pillow from a nearby car to stabilize the driver's head. A Kuwaiti traveling with Captain Dodd and Lieutenant Compean called for emergency medical assistance. Because two compassionate soldiers stopped to help, two Kuwaiti civilians' lives were saved.

We see our troops' compassion in Iraq. In May, a little Iraqi boy named Ahaip was discovered by soldiers from the 3rd Squadron, 1st Cav. Regiment, during a village assessment. The soldiers realized that this little boy suffered from a dangerous condition. The squadron used their Army contacts to get a surgeon at Al Sadr Hospital to arrange Ahaip's medical treatment. The regiment coordinated air travel for this little boy and his dad to get them to the hospital in time for his surgery.

Two weeks ago, this little boy underwent a two-hour procedure -- which was described as "a complete success." Because of the concern and attention of American troops, this little Iraqi boy can now enjoy a normal, healthy life.

Our troops are a force for good in Afghanistan. Earlier this year, a large crowd of dignitaries, medical personnel and civilians had gathered for the opening of a new emergency room at Khost City Hospital. After the ribbon-cutting ceremony, Sergeant Jason Fetty realized that something was out of place. After 10 months there, Sergeant Petty recognized the faces at the event -- all the faces at the event, except for one man in a lab coat.

By leading the bomber away from the crowd, Sergeant Fetty allowed for the evacuation of the Afghan civilians. Sergeant Fetty's heroism earned him a Silver Star -- and the gratitude of all the Afghans he saved. (Applause.)

Across the Middle East and around the world, many stories of compassion and self-sacrifice we hear. When Americans hear these stories, we think of them as extraordinary acts of heroism. To the men and women in our Armed Forces, they're just all in a day's work.

President Bush and I -- and people across the United States -- have the deepest admiration and respect for our Armed Forces. The American people know how difficult and dangerous your work here is. We also know that it's absolutely necessary for the security of our country. If you want the real measure of how Americans feel about you and your mission, listen for the love and pride in phone calls from your families. Read the encouragement in emails from your friends. Read the stories in the news -- the ones about the Main Street parades organized to honor hometown heroes.

President Bush and I get letters from Americans who say that they're proud of you, that they believe in you, and that they pray for your safety and success. And I hope you know that we pray -- President Bush and I do -- for an end to the violence everywhere so that future generations can grow up in a world at peace -- a world that you shaped. (Applause.)