For Immediate Release
Office of the Press Secretary
October 25, 2007

THE PRESIDENT: The Senator and the Congressman and the Governor and I have come up here to survey firsthand the terrible devastations done by the fires here in the San Diego area. We've met the Jeffcoats, who came up this hill, and went to what was their home. And we know how tough it is for you; 39 years of marriage -- that's something that you didn't think you'd be dealing with after all this time. So we want to let you know that the American people care for people like you who are suffering. We appreciate your spirit; we really do. I think all of us who met you were very impressed by your determination to deal with this tough moment in your life, and rebuild your lives.

To the extent that people need help from the federal government, we will help. I am here, really, to make sure that the federal effort works hand-in-glove with what the Governor has been doing. The Governor has taken the lead down here, and he's done a fine job. The thing I like about Governor Schwarzenegger, he says, you show me a problem, I'll charge it; if you show me a hill, I'll go up it -- and that's exactly what he's done.

And my job is to make sure that FEMA and the Defense Department and the Interior Department and Ag Department respond in a way that helps people get the job done. And that's what I'm here to listen to.

I want to thank the Senator for joining me. On the flight down we had a good conversation. She's deeply concerned about the citizens of California. She asked the right kind of questions, and, you know, we're going to give her the answers.

And Congressman, thank you for joining us. This is his district. It's got to be tough for you to represent the good people here and know that people are suffering.

But anyway, thanks for being here, and God bless you all. God bless the people of this state. Thank you.

Q Mr. President, a lot has been made about the contrast between this response and the Katrina response. Do you have any thoughts on that, and how you're doing?

THE PRESIDENT: You better ask the Governor how we're doing. I will tell you this: On all these responses, the thing that has amazed me most is the courage of our first responders. The firefighters here in this part of the world are incredibly brave people. The police force has done a fabulous job.

And same in the Katrina area. I mean, I know there was a lot of criticism of effort, but remember, there was 33,000 people pulled off roofs by brave Coast Guard men and women flying those choppers. A lot of people's lives were saved.

CONGRESSMAN BILBRAY: San Diego County has a centralized disaster response team made up of the County Chairman as the Chairman of the Disaster Council, and every police chief and fire chief and mayor, so there's a network here that those of us in the federal and the state level are able to come supplement. But the backbone of this response was the local providers, because they were organized. So the real heroes here are the providers, are the men and women working for the counties and the cities and the fire districts that really were here first and foremost, and we're just supplementing. 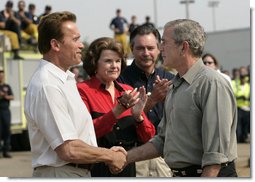 THE PRESIDENT: Yes, see, that's an interesting question. I appreciate you asking it. My hearts are with the Jeffcoats right now, that's what I'm thinking. I'm thinking about people whose lives turned upside-down. The experts can try to figure out whether the response was perfect or not. All I can tell you is when the Governor calls, I answer his phone. When the Governor says we need this help, think about sending these troops here, I got on the phone, I called the appropriate people. I'm interested in helping him solve problems and helping the folks here at the county level. There's all kinds of time for historians to compare this response or that response, but those of us who are here from government, our hearts are right here with the Jeffcoats, that's where we are.

And I'm looking forward, and I know the Senator and Governor and Congressman is, to eating lunch with the firefighters. We can't thank people enough for putting their lives at risk to help a neighbor, and that's exactly what's taking place. If there needs to be more firefighters, we'll send more firefighters. Those are the kind of questions that we're asking; what does it take to get the job done?

Q Mr. President, Congressman Hunter tried to get some of the C-130s here, and they are here, but they are still on the ground and the National Guard won't let them fly. What seems to be the problem? We really need those because the flames continue to fan.

GOVERNOR SCHWARZENEGGER: I just want to add to this because I want to thank the President for coming out here today. I can tell you that when we saw on Monday the flames going out of control and it becoming really a major disaster, I told my assistant that we got to call the President and ask for help, and before I ever had a chance to make that phone call -- I remember I was in the middle of a briefing -- the President -- I was in -- I got the phone, they said, it's the President on the phone. And he called me, and he told me that he's really concerned about the fires here in California and if anything he can do, anything that we need, we should let him know; that all his entire Cabinet and his whole staff, his team, everyone is available. 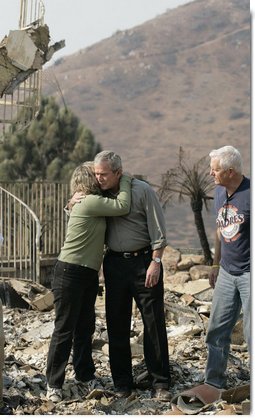 So I call this quick action, I mean, quicker than I expected, I can tell you that. And since then we've been talking every day on the phone and we asked him for an emergency declaration; they got it within 24 hours. We asked for a disaster declaration; we got that within 24 hours. And then he called me back and says, I'm going to come out because I'm really concerned about the people in California and what they are going through; we want to make sure that we help them get back on their feet -- and here he is.

So I call this very unbelievable response from the federal government and the Bush administration, from everyone and from Senator Feinstein; I want to thank you also for the great response, and she was calling us every hour and being concerned. So I would say this is really great response, and you cannot do this without everyone working together. And what we have seen here, unlike other disasters, I mean, how quickly the locals, the state and the federal government came together and everyone working together was really extraordinary to watch, so I want to thank everyone, I want to thank you again, President, for coming out here today and helping us.

THE PRESIDENT: Okay, thank you all.

* "Three fire suppression missions were flown yesterday. All six fire suppression equipped C-130s, four from the National Guard and two from the Air Force Reserve, are operational today and are dropping on the Poomacha fire in southern California this afternoon. For more information, contact Dan Stoneking at 703-607-2554."