For Immediate Release
Office of the First Lady
October 23, 2007

MRS. BUSH: Well, thank you all for all coming out today. I'm so happy to be here in Saudi Arabia and to have this chance to visit this cancer screening clinic, which is one of the first in Saudi Arabia. 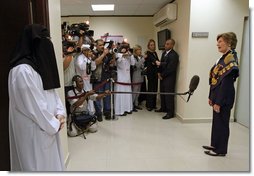 So this is a great model for other parts of Saudi Arabia. Because of regular screenings, people can discover a cancer early before it's in such an advanced stage that it's hard to cure.

So it's very important for people all over the world, but especially in the Middle East, to get cancer screenings early. Breast cancer presents at a younger age in the Middle East than it does in America -- we don't know why, but it just does. So even younger women who aren't yet thinking about possibly having cancer should drop by the cancer screening and learn how to do self-exams.

We also have a very strong foundation for breast cancer research called the Komen Foundation for the Cure, and they're one of the partners in the partnership that I'll be announcing later this afternoon in Saudi Arabia.

Now everyone knows what the pink ribbon means that Americans wear, and that I hope people here in Saudi Arabia will also wear to remind people about breast cancer.

I'm very happy to be here. Thank you for letting me have this chance to talk about something that's important to women in the United States and women here in Saudi Arabia.

And I want to thank Dr. Huda, who's with me, very, very much. Thank you so much, and thank you for everything that's happening here. Thanks a lot.

Q This is your first visit to the Gulf. I understand yesterday you were in the UAE.

Q Today you're in Saudi Arabia. What impression is the first one you got about the region, which you didn't come to before? Can you give us your first impression?

One thing that I've been very impressed with are the women in the UAE and the women here that I've had the chance to meet so far in Saudi Arabia, that they're educated, that they're interested in working with women on issues like breast cancer. And I appreciate that very much.

I also know that the UAE and Saudi Arabia are friends with the United States, and I appreciate that also. Anything else?

Q In the future, what cooperation with the (inaudible) on behalf -- between the United States and the Kingdom for fighting this disease for cancer?

MRS. BUSH: For breast cancer? That's what we're going to announce this afternoon, and that's this very important partnership between the United States and Saudi Arabia; M.D. Anderson Cancer Clinic at the University of Texas in Houston, which is a very -- one of the strongest cancer hospitals in research in the United States; the Komen Foundation, which is the breast cancer awareness and advocacy foundation.

And so all of these groups will be coming together here in the Middle East and in the United States, both to get the word out to women about breast cancer so women can get preventive screenings and take care of their health, and also to combine research that M.D. Anderson is doing in the United States and research that hospitals are doing here in the Middle East so they can share their data and hopefully come up with new and better treatments, with more ways for women to be able to protect themselves.

And I think it will be a very, very important collaboration between the doctors here in the Middle East and the doctors in the United States.