For Immediate Release
Office of the First Lady
October 23, 2007

Doctors, patients, researchers, government officials, community leaders, survivors, distinguished guests -- I'm so happy to be here. Thank you for your very warm welcome to the UAE. 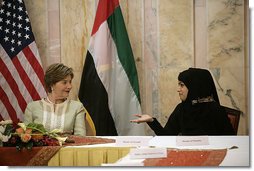 I'm delighted to be in Abu Dhabi to talk about how we can work together to save women's lives -- by raising women's awareness of breast cancer. Over the next quarter-century, an estimated 25 million women around the world will be diagnosed with breast cancer. Breast cancer knows no boundaries, which is why people from every country must share their knowledge, resources and experience to overcome this disease.

Americans have a national experience with breast cancer advocacy and awareness. Twenty-five years ago in the United States, women were too embarrassed and fearful to talk about breast cancer. Because everyone kept breast cancer a secret, women weren't aware of what they could do to protect themselves. They didn't get regular mammograms or do breast self-exams. The majority of breast cancer cases were discovered in advanced stages of 3 and 4. By then it's usually too late for breast cancer to be treated successfully.

A lot has changed in 25 years. Today, people do talk about breast cancer -- often to tell stories of triumph. In 1982, my friend Nancy Brinker started the Susan G. Komen Foundation in honor of her sister Susan, who had died of breast cancer. Because of the Komen Foundation's work to raise women's awareness, everyone in the United States now knows what the pink ribbon stands for.

Every October during Breast Cancer Awareness Month, women are encouraged to go with their mothers and their sisters and their friends to get mammograms. Today in the United States, when breast cancer is detected early, the five-year survival rate is 98 percent.

I have to also say that two First Ladies -- Betty Ford, wife of President Gerald Ford, and Nancy Reagan, wife of President Ronald Reagan -- both became very public when they had bouts with breast cancer. And that also served as a great role model to American women. When Betty Ford spoke out about her breast cancer, very few people spoke about breast cancer. But when she talked about it, and then later when Nancy Reagan talked of hers, it reminded women all across the United States to do regular breast self-exams and to get yearly mammograms.

Today, a similar story is unfolding here in the Middle East. Like in the United States, here women are embarrassed to even mention breast cancer, and they're slow to seek a doctor's help. About 70 percent of breast cancer cases are detected in the advanced stages of 3 and 4. This means that women don't benefit from early detection and aggressive treatment, which is the closest thing we have to a cure. 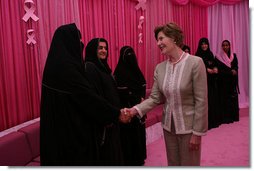 As in the United States, people in the Middle East -- people like you -- are speaking up to saves women's lives from this disease. The American people are proud to stand with you.

Last year I helped launch the U.S.-Middle East Partnership for Breast Cancer Awareness and Research. This program joins medical and community organizations from the UAE, Saudi Arabia and Jordan with the medical expertise of the University of Texas M.D. Anderson Cancer Clinic. This partnership will benefit from the educational resources of Susan G. Komen, and the strong commitment of the United States Department of State. Through the partnership, these institutions will initiate awareness campaigns and increase clinical resources. American medical institutions and Middle Eastern hospitals will share discoveries and data that can lead to world-class research, helping women in the Middle East and women in the United States protect their health.

This is the first partnership for breast cancer awareness and research between the United States and a country in the Middle East. Here in the United Arab Emirates, hundreds of women attended the launch of the partnership last October. Breast Cancer 101 training sessions have been held for women in the workplace at Citibank UAE and for women university students in Abu Dhabi.

Today the partnership in the UAE is launching a new initiative. A Memorandum of Understanding has been signed between the Health Authority of Abu Dhabi and Susan G. Komen for the Cure, and together these partners will educate women about the importance of early detection.

Emirati health educators, NGO workers, midwives, religious leaders, nursing students and business and government officials will train women to be effective advocates for their own health. Congratulations to the Abu Dhabi Health Authority and to the Komen Foundation and the people of Abu Dhabi on the launch of this important program. 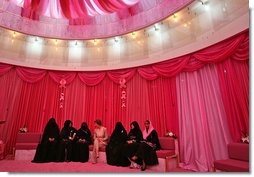 The pain of losing a loved one to breast cancer -- and the joy of seeing a loved one survive it -- are the same in every country. By confronting the challenge of breast cancer together, the United States-Middle East Partnership for Breast Cancer Awareness will help build lasting friendships between our countries. Most important, this partnership will give women hope, by teaching them about the things they can do to protect themselves from breast cancer.

The partnership's work at the Pink Majlis, which is one of Sheikh Khalifa Medical Center's many breast cancer education initiatives, provides a safe place where Emirati women can learn about breast cancer and an environment that's suited to their customs and culture.

At the Pink Majlis, I heard from doctors and nurses and the courageous women they've helped save. One of these survivors is a woman named Shareefa.

Shareefa discovered her breast cancer, and she was treated here at the Sheikh Khalifa Medical Center. Now Shareefa is an active member of the Center's breast cancer support group. Her four daughters have joined Shareefa to help end the silence, shame and fear surrounding breast cancer.

Some men divorce their wives when breast cancer is diagnosed. But Shareefa's husband and sons shaved their heads in solidarity with her when she was in treatment.

The United States-Middle East Partnership for Breast Cancer Awareness and Research, women like Shareefa can find the support and the medical care and the courage and hope they need to live with a breast cancer diagnosis.

Thank you to each one of you for supporting women and for inspiring all of us through your commitment to saving women's lives. Thank you all very much. 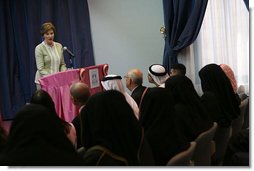