For Immediate Release
Office of the Press Secretary
October 22, 2007

THE PRESIDENT: Thank you all for joining me. I just finished visiting with veterans and members of military support organizations, the family of the fallen. Thank you all for being here. I'm proud you're here.

These patriots have come to the Oval Office to make sure -- and to make clear -- that our troops have the full commitment of our government. And I strongly agree that we must provide our troops with the help and support they need to get the job done. Parts of this war are complicated, but one part is not, and that is America should do what it takes to support our troops and protect our people. And today, I sent Congress an updated supplemental war funding request that will do just that. 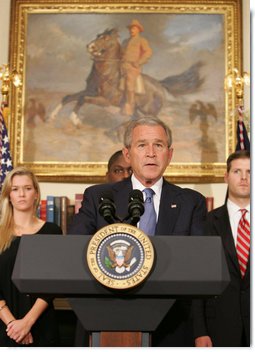 The majority of the supplemental funding is for day-to-day -- is for day-to-day military operations in Afghanistan and Iraq. The bill provides for basic needs like bullets and body armor, protection against IEDs, and Mine-Resistant Ambush-Protected vehicles. It also funds training missions, vital embassy programs, improvements in Iraq and Iraqi security forces, and intelligence operations that protect our troops. These are urgent military necessities, and the supplemental was prepared in close consultation with our commanders on the ground. This funding is what General Petraeus and other military leaders say we need -- and Congress ought to give it to them.

Our military commanders will use this money to continue carrying out their missions in Afghanistan and Iraq. In Afghanistan, our troops, NATO allies and Afghan forces are making gains against the Taliban and al Qaeda. In Iraq, our campaign to provide security for the Iraqi people has been difficult and dangerous, but it is achieving results. Al Qaeda and other extremists have been driven from strongholds in places like Anbar Province and parts of Diyala Province. In Baghdad, the number of Iraqi civilians murdered by terrorists and death squads is down sharply. Throughout Iraq, the number of American service members killed in September was the lowest since July 2006. And the level of violence during Ramadan was down significantly from last year.

Last month, General Petraeus said he believes that our successes in Iraq mean we can maintain the same level of security with fewer American forces. I accepted this recommendation that we not replace about 2,200 Marines who left Anbar last month. We expect to bring home another 3,500 soldiers by Christmas. The funds in the supplemental are crucial to continuing this policy of "return on success." Every member of Congress who wants to see both success in Iraq and our troops begin to come home should strongly support this bill.

I know some in Congress are against the war, and are seeking ways to demonstrate that opposition. I recognize their position, and they should make their views heard. But they ought to make sure our troops have what it takes to succeed. Our men and women on the front lines should not be caught in the middle of partisan disagreements in Washington, D.C. I often hear that war critics oppose my decisions, but still support the troops. Well, I'll take them at their word -- and this is the chance to show it, that they support the troops.

Along with support for our troops in Afghanistan and Iraq, the supplemental also includes emergency funding for other critical national security needs. It includes money to improve medical care for our wounded warriors. It funds equipment repair, and upgrades the strategic readiness of the Army. It provides crucial relief for Iraqi refugees. It supports the peacekeeping mission of the United Nations in Darfur. It delivers vital assistance for our partners in Mexico and Central America, who are working to break up drug cartels, and fight organized crime, and stop human trafficking. All of these are urgent priorities of the United States, and the Congress should fund them without delay.

One reason Congress can move the supplemental quickly is that it's had more than eight months to study most of the provisions. In fact, nearly 75 percent of the funding requested in the supplemental was submitted along with my annual budget in February. We took this step in direct response to requests from Congress. Members of Congress should consider the supplemental promptly. They should keep it focused on true necessities, not pet projects. And they should pass a good, clean bill as soon as possible. Congress should not go home for the holidays while our troops are still waiting for the funds they need.

In addition to passing the supplemental, Congress also needs to complete clean appropriations bills for the Departments of Defense and Veterans Affairs. The House and the Senate have passed versions of both these bills, but leaders in the House have not yet named conferees. They should name them now -- so that members of Congress can work out their differences and send me these vital bills as soon as possible.

I want to thank all those who are standing with me today for their strong support for our troops, our veterans and our military families. May God bless you all. Thank you.