For Immediate Release
Office of the Press Secretary
October 22, 2007

THE PRESIDENT: Good afternoon, and welcome to the White House. The Medal of Honor is the highest military decoration that a President can bestow. It recognizes gallantry that goes above and beyond the call of duty in the face of an enemy attack. The tradition of awarding this honor began during the Civil War. And many of those who have received the medal have given their lives in the action that earned it. 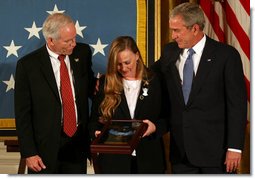 Today, we add Lieutenant Michael Murphy's name to the list of recipients who have made the ultimate sacrifice. Deep in the mountains of Afghanistan, this brave officer gave his life in defense of his fellow Navy SEALs. Two years later, the story of his sacrifice humbles and inspires all who hear it. And by presenting Michael Murphy's family with the Medal of Honor that he earned, a grateful nation remembers the courage of this proud Navy SEAL.

I appreciate the fact that Deputy Secretary Gordon England has joined us; Secretary Pete Geren of the Army; Secretary Don Winter of the Navy; Secretary Mike Wynne of the Air Force; Admiral Mike Mullen, Chairman of the Joint Chiefs; Admiral Gary Roughead, Chief of Naval Operations; and all who wear the nation's uniform. Welcome.

I appreciate the fact that we've got Barney Barnum, Tom Kelley, Tommy Norris, and Mike Thornton, Medal of Honor recipients, with us today.

We do welcome Dan Murphy and Maureen Murphy, father and mother of Michael Murphy; John Murphy, his brother; and other family members that are with us today.

It's my honor to welcome all the friends and comrades of Lieutenant Michael Murphy to the White House. And I want to thank Chaplain Bob Burt, Chief of Chaplains, for his opening prayer.

Looking back on his childhood in Patchogue, New York, you might say that Michael Murphy was born to be a Navy SEAL. SEALs get their name from operating by sea, air, and land -- and even as a toddler, Michael could find his way through any obstacle. When he was just 18 months old, he darted across a neighbor's yard, and dove into the swimming pool. By the time his frantic parents reached him, Michael had swum to the other side with a big smile on his face. As he grew older, Michael learned to swim from one side of a nearby lake to the other -- and he developed into a talented all-around athlete.

But beyond his physical strength, Michael Murphy was blessed with a powerful sense of right and wrong. This sense came from devoted parents who taught him to love his neighbor -- and defend those who could not defend themselves. Well, Michael took these lessons to heart. One day in school, he got into a scuffle sticking up for a student with a disability. It's the only time his parents ever got a phone call from the principal -- and they couldn't have been prouder. Michael's passion for helping others led him to become a caring brother, a tutor, a lifeguard, and eventually, a member of the United States Armed Forces. 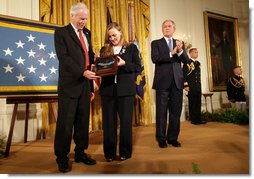 Michael's decision to join the military wasn't an easy one for his family. As a Purple Heart recipient during Vietnam, Michael's father understood the sacrifices that accompany a life of service. He also understood that his son was prepared to make these sacrifices. After graduating from Penn State with honors, Michael accepted a commission in the Navy -- and later, set off for SEAL training. Fewer than a third of those who begin this intense training program graduate to become Navy SEALs. Yet there was little doubt about the determined lieutenant from New York. And in 2002, Michael earned his Navy SEAL Trident.

Michael also earned the respect of his men. They remember a wise-cracking friend who went by "Mikey" or "Murph." They remember a patriot who wore a New York City firehouse patch on his uniform in honor of the heroes of 9/11. And they remember an officer who respected their opinions, and led them with an understated, yet unmistakable, sense of command. Together, Michael and his fellow SEALs deployed multiple times around the world in the war against the extremists and radicals. And while their missions were often carried out in secrecy, their love of country and devotion to each other was always clear.

On June 28th, 2005, Michael would give his life for these ideals. While conducting surveillance on a mountain ridge in Afghanistan, he and three fellow SEALs were surrounded by a much larger enemy force. Their only escape was down the side of a mountain -- and the SEALs launched a valiant counterattack while cascading from cliff to cliff. But as the enemy closed in, Michael recognized that the survival of his men depended on calling back to the base for reinforcements. With complete disregard for his own life, he moved into a clearing where his phone would get reception. He made the call, and Michael then fell under heavy fire. Yet his grace and upbringing never deserted him. Though severely wounded, he said "thank you" before hanging up, and returned to the fight -- before losing his life.

Unfortunately, the helicopter carrying the reinforcements never reached the scene. It crashed after being struck by a rocket-propelled grenade. And in the end, more Americans died in Afghanistan on June 28th, 2005 than on any other day since the beginning of Operation Enduring Freedom. This day of tragedy also has the sad distinction of being the deadliest for Navy Special Warfare forces since World War II.

One of Michael's fellow SEALs did make it off the mountain ridge -- he was one of Michael's closest friends. Petty Officer Marcus Luttrell of Texas, author of a riveting book called "Lone Survivor," put it this way: "Mikey was the best officer I ever knew, an iron-souled warrior of colossal and almost unbelievable courage in the face of the enemy."

For his courage, we award Lieutenant Michael Murphy the first Medal of Honor for combat in Afghanistan. And with this medal, we acknowledge a debt that will not diminish with time -- and can never be repaid.

Our nation is blessed to have volunteers like Michael who risk their lives for our freedom. We're blessed to have mothers and fathers like Maureen and Dan Murphy who raise sons of such courage and character. And we're blessed with the mercy of a loving God who comforts all those who grieve.

And now I ask Michael's parents to join on stage, and the Military Aide will read the citation.

MILITARY AIDE: The President of the United States of America, in the name of Congress, takes pride in presenting the Medal of Honor to Lieutenant Michael P. Murphy, United States Navy, for conspicuous gallantry and intrepidity at the risk of his life, above and beyond the call of duty, as the leader of a special reconnaissance element with Naval Special Warfare Task Unit Afghanistan on 27 and 28 June 2005.

While leading a mission to locate a high-level anti-coalition militia leader, Lieutenant Murphy demonstrated extraordinary heroism in the face of grave danger in the vicinity of Asadabad, Konar Province, Afghanistan. On 28 June 2005, operating in an extremely rugged, enemy-controlled area, Lieutenant Murphy's team was discovered by anti-coalition militia sympathizers who revealed their position to Taliban fighters. As a result, between 30 and 40 enemy fighters besieged his four-member team.

Demonstrating exceptional resolve, Lieutenant Murphy valiantly led his men in engaging the large enemy force. The ensuing fierce firefight resulted in numerous enemy casualties, as well as the wounding of all four members of his team. Ignoring his own wounds and demonstrating exceptional composure, Lieutenant Murphy continued to lead and encourage his men. When the primary communicator fell mortally wounded, Lieutenant Murphy repeatedly attempted to call for assistance for his beleaguered teammates. Realizing the impossibility of communicating in the extreme terrain and in the face of almost certain death, he fought his way into an open terrain to gain a better position to transmit a call. This deliberate heroic act deprived him of cover, exposing him to direct enemy fire. Finally achieving contact with his headquarters, Lieutenant Murphy maintained his exposed position while he provided his location and requested immediate support for his team.

In his final act of bravery, he continued to engage the enemy until he was mortally wounded, gallantly giving his life for his country and for the cause of freedom. By his selfless leadership, courageous actions, and extraordinary devotion to duty, Lieutenant Murphy reflected great credit upon himself and upheld the highest traditions of the United States Naval Service.

(The Medal of Honor is presented to Lieutenant Michael Murphy's parents.)