For Immediate Release
Office of the Press Secretary
October 19, 2007

THE PRESIDENT: Laura, thank you for joining; and Madam Secretary. In the last few weeks, the world has been inspired by the courage of the Burmese people. Ordinary men and women have taken to the streets in peaceful marches to demand their freedom and call for democratic change. The world has also been horrified by the response of Burma's military junta. Monks have been beaten and killed. Thousands of pro-democracy protestors have been arrested. And Burma's dictator, Than Shwe, continues to hold captive the leader of Burma's largest democratic party -- Aung San Suu Kyi. 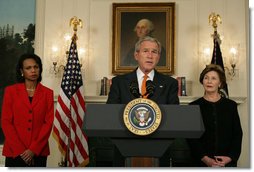 Burma's rulers continue to defy the world's just demands to stop their vicious persecution. They continue to dismiss calls to begin peaceful dialogue aimed at national reconciliation. Most of all, they continue to reject the clear will of the Burmese people to live in freedom under leaders of their own choosing.

Last month, the United States tightened economic sanctions on the leaders of Burma's regime, and imposed an expanded visa ban on those responsible for the most egregious violations of human rights, as well as their family members. The Treasury Department designated 14 top leaders of the Burmese regime for sanctions -- including Than Shwe and his deputy, Vice Senior General Maung Aye. And the State Department added 260 names of Burmese officials and their family members to the visa ban list.

In light of the ongoing atrocities by these men and their associates, the United States has today imposed additional sanctions.

First, the Treasury Department has designated 11 more leaders of the Burmese junta for sanctions under existing authorities.

Third, I have instructed our Commerce Department to tighten its export control regulations for Burma.

Burmese authorities claim they desire reconciliation. Well, they need to match those words with actions. A good way to start would be to provide the International Committee of the Red Cross and other humanitarian organizations access to political prisoners; to allow Aung San Suu Kyi and other detained leaders to communicate with one another; and to permit U.N. Special Envoy Gambari to enter their country immediately. And ultimately, reconciliation requires that Burmese authorities release all political prisoners -- and begin negotiations with the democratic opposition under the auspices of the United Nations.

We will continue to review our policies and consider additional measures if Burma's leaders do not end the brutal repression of their own people whose only offense is the desire to live in freedom. Business as usual is unacceptable. So I applaud the efforts of the European Union and nations like Australia that have announced targeted sanctions on the Burmese regime. I commend nations such as Japan that have curtailed their assistance to Burma in response to the atrocities. I appreciate nations such as Singapore and the Philippines and Indonesia, who have spoken out against the atrocities. I ask other countries to review their own laws and policies, especially Burma's closest neighbors -- China, India, and others in the region.

The people of Burma are showing great courage in the face of immense repression. They are appealing for our help. We must not turn a deaf ear to their cries. They do have many friends around the world -- including Laura. I am proud of Laura for all she has done to awaken the conscience of the world to the plight of the Burmese people. I believe no nation can forever suppress its own people. And we are confident that the day is coming when freedom's tide will reach the shores of Burma.