For Immediate Release
Office of the Press Secretary
October 17, 2007 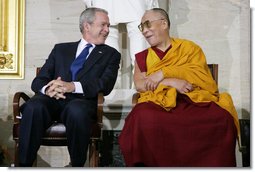 Over the years, Congress has conferred the Gold Medal on many great figures in history -- usually at a time when their struggles were over and won. Today Congress has chosen to do something different. It has conferred this honor on a figure whose work continues -- and whose outcome remains uncertain. In so doing, America raises its voice in the call for religious liberty and basic human rights. These values forged our Republic. They sustained us through many trials. And they draw us by conviction and conscience to the people of Tibet and the man we honor today.

Nearly two decades have passed since the Dalai Lama was welcomed to the White House for the very first time. Members of both of our political parties and world leaders have seen His Holiness as a man of faith and sincerity and peace. He's won the respect and affection of the American people -- and America has earned his respect and affection, as well.

As a nation, we are humbled to know that a young boy in Tibet -- as a young boy in Tibet, His Holiness kept a model of the Statue of Liberty at his bedside. Years later, on his first visit to America, he went to Battery Park in New York City so he could see the real thing up close. On his first trip to Washington, he walked through the Jefferson Memorial -- a monument to the man whose words launched a revolution that still inspires men and women across the world. Jefferson counted as one of America's greatest blessings the freedom of worship. It was, he said, "a liberty deemed in other countries incompatible with good government, and yet proved by our experience to be its best support."

The freedom of belief is a yearning of the human spirit, a blessing offered to the world, and a cherished value of our nation. It's the very first protection offered in the American Bill of Rights. It inspired many of the leaders that this rotunda honors in portraits and in marble. And it still defines our way of life.

Consider where we gather today. This great symbol of democracy sits quietly near a Catholic parish, a Jewish synagogue, a Muslim community center, a Greek Orthodox cathedral, and a Buddhist temple -- each with faithful followers who practice their deeply held beliefs and live side by side in peace. This diversity is not a source of instability -- it's a source of strength. (Applause.) This freedom does not belong to one nation -- it belongs to the world.

One of the tragic anomalies of the past century is that in an era that has seen an unprecedented number of nations embrace individual freedom has also witnessed the stubborn endurance of religious repression. Americans cannot look to the plight of the religiously oppressed and close our eyes or turn away. And that is why I will continue to urge the leaders of China to welcome the Dalai Lama to China. They will find this good man to be a man of peace and reconciliation. (Applause.) 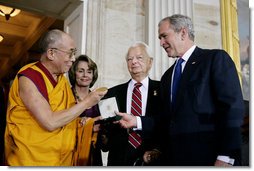 Throughout our history, we have stood proudly with those who offer a message of hope and freedom to the world's downtrodden and oppressed. This is why all of us are drawn to a noble and spiritual leader who lives a world away. Today we honor him as a universal symbol of peace and tolerance, a shepherd for the faithful, and the keeper of the flame for his people.

I congratulate His Holiness on this recognition. I'm so honored to be here with you, sir. Laura and I join all Americans in offering the people of Tibet our fervent prayer that they may find days of prosperity and peace.

And now I ask the Speaker and Senator Byrd to join me for the Gold Medal presentation. (Applause.) 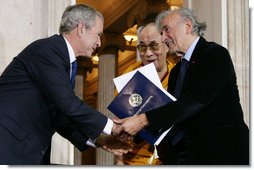