For Immediate Release
Office of the First Lady
October 11, 2007

Mrs. Bush's Remarks at the Screening of "Ballou: A Documentary Film"
The East Room

MRS. BUSH: Welcome, everyone, to the White House. I'm so happy you're here today. I'm so excited to have this opportunity to honor the Ballou High School Marching Band and your great accomplishments.

Ballou is home to a terrific marching band that has a history of championships. I want to congratulate the band for their fine performance at the National High-Stepping Marching Band competition in Birmingham last year. (Applause.) And I also want to thank you for marching and playing in the President's 2005 inaugural parade. (Applause.) 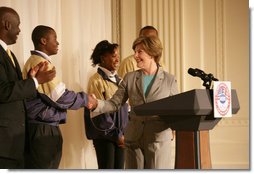 This year's band is currently ranked third in the nation, and you have the opportunity to compete for first place in November. Good luck next month. (Applause.)

Mr. Watson loves his job, and he does it well. He also loves the young people in his band, and it shows. He's a caring adult that's made a difference in each of your lives.

I'm proud that Mr. Watson is here today because he represents the core message of Helping America's Youth. During the President's 2005 State of the Union address, he announced the Helping America's Youth initiative, and he asked me to lead it. So for the last two years, I've traveled all across the country meeting with young people and with the adults who are so important to their lives. I've been to schools and to after-school programs. I've met with mentors and Big Brothers and Big Sisters. I visited a sports program in Detroit, a debate program in Atlanta, gang intervention programs in Los Angeles and Chicago. And today, Mr. Watson stands here as an example of what America's adults can do if they'll stay involved with the lives of our young people. So thank you very, very much. (Applause.)

Under the direction of Mr. Watson, you've all learned to play musical instruments at the Ballou High School Marching Band, you've won several national awards, but more importantly, the students who join the band have learned valuable life lessons along the way. Mr. Watson has been a friend to you, he's encouraged you in your academic pursuits, and he's supported you in your personal lives.

Mr. Watson is lucky to have support from many other caring adults; some are in the room with us today: your principal Karen Smith -- (applause) -- nine volunteer band staff members, all of whom attended Ballou High School once themselves -- (applause.) So I want to take this opportunity to thank all of the adults who have stayed so important to the lives of the children back in your own school. I think that's a really great example for other people around the United States. 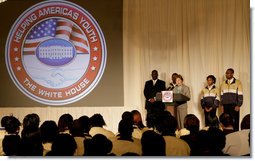 There are other people here that I'd like for you all to meet: Congressman Norton and Mayor Fenty -- (applause) -- and the new school superintendent Michelle Rhee. (Applause.)

When you leave the White House today, I hope you'll remember how much Mr. Watson and other adults -- your mother, your dad, your grandparents -- have had -- how they've cared for you and how much they've helped you find the best way for your life.

The best way you can show that you appreciate them is by working hard to be successful in high school. The same things that have helped you succeed as a marching band will bring success to you in all of your life, and that's hard work, discipline, and a commitment to achieving your dreams.

Thank you all so much for coming. I'm so excited to see this story of the Ballou High School Marching Band. (Applause.)