For Immediate Release
Office of the Press Secretary
October 11, 2007

THE PRESIDENT: Just had a meeting with members of my economic team -- and I thank you all for coming. I particularly want to thank Director of the OMB Jim Nussle for his briefing on the newest numbers regarding our deficit.

You know, last February, it was projected that our deficit would be $244 billion, and today the Director informed us that the deficit -- actual deficit is $163 billion. In other words, as a result of the hard work of the American people, this economy is growing; the growing economy has yielded more tax revenues than anticipated. And because of fiscal restraint, those tax revenues went to reduce our deficit. 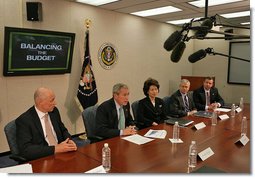 The deficit today is at 1.2 percent of GDP, which is lower than the average of the last 40 years. In other words, we have told the American people that by keeping taxes low we can grow the economy, and by working with Congress to set priorities we can be fiscally responsible and we can head toward balance. And that's exactly where we're headed.

Now the fundamental question is whether the United States Congress will work constructively with the administration to keep taxes low and to keep spending sound. I look forward to working with members of both parties to continue keeping this -- keeping our fiscal house in order, to continue to head for a balanced budget. But it's going to require the Congress to show fiscal restraint, fiscal discipline. One of the reasons why the Constitution wisely gave the President the veto is to help them exercise fiscal discipline and fiscal constraint.

It's very important for Congress to also understand that they should not be trying to take money out of the pockets of the small business owners and working people. One of the reasons why this economy is robust is because taxes are low. And in order to keep -- make sure that this economy grows we've got to keep them low. After all, people are working here in America. We've had 49 consecutive months of uninterrupted job growth, which is a record. And we intend to keep breaking that record by good fiscal policy here in Washington, D.C.

I want to thank you all for your briefing. Thanks for coming by.