For Immediate Release
Office of the Press Secretary
October 10, 2007

THE PRESIDENT: Good morning. In August, Congress passed the Protect America Act, a bill to modernize the Foreign Intelligence Surveillance Act of 1978. This new law strengthened our ability to collect foreign intelligence on terrorists overseas, and it closed a dangerous gap in our intelligence. Since this important measure took effect, our intelligence professionals have been able to gather critical information that would have been missed without this authority. And keeping this authority is essential to keeping America safe. 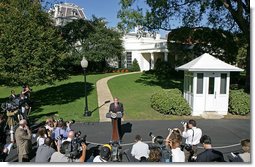 Unfortunately, when Congress passed the Protect America Act they set its provisions to expire in February. The problem is the threat to America is not going to expire in February. So Congress must make a choice: Will they keep the intelligence gap closed by making this law permanent? Or will they limit our ability to collect this intelligence and keep us safe, staying a step ahead of the terrorists who want to attack us?

My administration will work with members of Congress from both sides of the aisle to reach an agreement on a bill that will allow us to protect our country. The final bill must meet certain criteria: It must give our intelligence professionals the tools and flexibility they need to protect our country. It must keep the intelligence gap firmly closed, and ensure that protections intended for the American people are not extended to terrorists overseas who are plotting to harm us. And it must grant liability protection to companies who are facing multi-billion-dollar lawsuits only because they are believed to have assisted in the efforts to defend our nation following the 9/11 attacks.

When Congress presents me with a bill, I will ask the Director of National Intelligence whether it meets these criteria. And if it does, I will sign it into law.

Today, the House Intelligence and Judiciary Committees are considering a proposed bill that instead of making the Protect America Act permanent would take us backward. While the House bill is not final, my administration has serious concerns about some of its provisions, and I am hopeful that the deficiencies in the bill can be fixed.

Congress and the President have no higher responsibility than protecting the American people from enemies who attacked our country -- and who want to do so again. Terrorists in faraway lands are plotting and planning new ways to kill Americans. The security of our country and the safety of our citizens depend on learning about their plans. The Protect America Act is a vital tool in stopping the terrorists -- and it would be a grave mistake for Congress to weaken this tool. 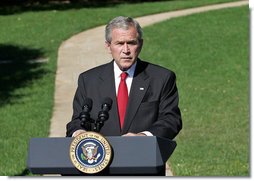 On another issue before Congress, I urge members to oppose the Armenian genocide resolution now being considered by the House Foreign Affairs Committee. We all deeply regret the tragic suffering of the Armenian people that began in 1915. This resolution is not the right response to these historic mass killings, and its passage would do great harm to our relations with a key ally in NATO and in the global war on terror.