For Immediate Release
Office of the Press Secretary
October 10, 2007

THE PRESIDENT: Thank you all. Please be seated. Siéntese.  Gracias.  Bienvenidos a la Casa Blanca, también el jardín de las rosas. It's a beautiful day. I'm glad you're here. Thanks for coming as we celebrate Hispanic Heritage Month. Every year at this time, we recognize the rich cultural traditions of the Hispanic American community -- and the great contributions of Hispanic Americans to our country and our character. That's why we're here. 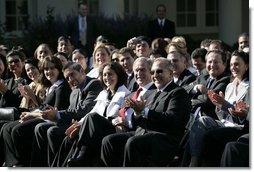 I appreciate so very much Ambassador Sue Schwab, who is the U.S. Trade Representative, for joining us. We're proud you're here, Madam Ambassador. I'm going to say something positive about trade, so I'm glad you came. I appreciate my friend, my dear friend, former Attorney General of the United States, Al Gonzales. (Applause.) I appreciate Anna Cabral, U.S. Treasurer, and Victor. Thank you all for coming. (Applause.) I'm proud that other members of my administration have joined us. Sarah, it's good to see you; thank you for being here.

I have just met a remarkable woman that I want to introduce to you:  Yamile Llanes Labrada, and her daughter, Shirlen García, have joined me in the Oval Office.  Yamile is the wife of a political prisoner in Cuba, Dr. José Luis García Paneque.  The doctor was a plastic surgeon.  He did nothing more than advocate for freedom.  And he's now in prison.  And not only is he in prison, he's ill.  And so one of the messages I have for the Cuban leader is, free this man, and free other political prisoners.  He's not a threat to you.  Let him be reunited with a woman who loves him dearly, and his four children.  So, Yamile, thanks for coming.  We're proud you're here.  (Applause.)  Sure glad you're here.  Y que Dios les bendiga a su familia y también su esposo.

Citizens of Hispanic descent are the fastest-growing population in America. Hispanic Americans strengthen our nation with their commitments to familia y fe. Hispanic Americans enrich our country with their talents and creativity and hard work. Hispanic Americans are living the dream that has drawn millions to our shores -- and we must ensure that the American Dream remains available for all. It's an important part of our past, and it's a central part of our future that people from all walks of life feel welcomed and given the opportunity to realize the blessings of America. 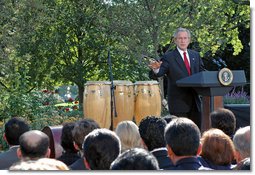 Realizing the promise of this good country requires a good education. You know, I worked hard with Republicans and Democrats to pass what's called the No Child Left Behind Act. That's an important piece of legislation because it raises standards, and it holds schools to account. And the law is working. It's a good piece of legislation. It's working because I can report to you that last month we saw the results from what's called the Nation's Report Card. The report card showed record performance in 4th and 8th grade math and 4th grade reading. And the report showed that Hispanic students scored all-time highs in a number of areas. And so we need to build on that progress. It's good that we've got a good report card; we want excellent report cards for every child.

Realizing the promise of America requires a growing economy. Last week, we got more good news on this front. The economy added 110,000 new jobs in September, giving us 49 straight months of job growth -- and that's a new record. We are now enjoying the longest period of uninterrupted job creation in the history of the United States. The growing economy is the result of good policies, like low taxes, but it's also mainly the result of hard work of workers and entrepreneurs, including hundreds of thousands of Latino business owners.

And so to keep the economy growing, we've got to make sure we don't raise your taxes. And to keep the economy growing, we've got to open new markets for goods and services. One of the most important markets is in our own hemisphere. Many Hispanic-owned businesses in our country depend on trade with Latin America. Trade with the region strengthens ties of friendship and commerce. Free trade helps our neighbors prosper. And so to expand trade with Latin America, we negotiated, and Congress approved, a free trade agreement with five Central American countries, as well as the Dominican Republic. And this agreement is working, it's helped American workers. It's new markets for products made here -- right here in the United States. And it's helped our neighbors. We want everybody to do well in our neighborhood. We want prosperity to abound. 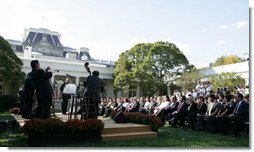 And that's why we've negotiated new free trade agreements with Peru and Colombia and Panama. For the sake of businesses and sake of our workers, and for the sake of prosperity in the neighborhood, the United States Congress needs to approve these three very important trade agreements. (Applause.)

Realizing the promise of the country requires strong communities, where people care for each other in times of need. Yamile found help in the United States from people who care about the condition of her husband. A total stranger that didn't know Yamile before she came to the United States said, how can I help you; what can I do? That happens all across our country when Hispanic Americans run soup kitchens and drug treatment clinics and hear the call -- God's call -- to love our neighbors as we'd like to be loved ourself.

We see this spirit in Hispanic Americans who volunteer as Little League coaches, or serve as Big Brothers and Big Sisters, or give their time and energy to improve the lives of people that live across the street from them. By caring for others, Hispanic Americans make ours a better and more compassionate nation -- and America appreciates the example they set.

Finally, realizing the promise of America requires a secure country. We honor the many Hispanic Americans who wear the uniform here at home -- the police, and firefighters, and emergency rescue personnel who risk their lives each day to protect our homeland and our communities. And we honor the 200,000 Hispanic Americans who serve in our Armed Forces -- who are working to spread liberty so we can be secure here in America; who are doing the hard work today so our children and grandchildren can grow up in peace. I appreciate the fact that they have volunteered in a time of danger, and I'm proud to welcome members of the United States military with us today. Thank you all for coming. (Applause.)

So during Hispanic Heritage Month, we celebrate the diversity that makes our country stronger -- and the heritage and the spirit that Hispanic Americans bring to this great democracy. To help us celebrate the heritage and spirit, we have an incredible talent: "Cachao." He was born in Havana only in 1918. That was before my time. During the late 1930s, he helped popularize the mambo, and over the past half century he has won a lot of Grammy Awards -- most recently in 2005, believe it or not. So if you do the math, you can figure out this man hasn't stopped working. (Laughter.) He's still clicking, and he's still making good music. And so we're proud to welcome Israel Lopez, better known as "Cachao," to here -- to the White House. Thank you for coming. (Applause.)

THE PRESIDENT: I know you'll join me in thanking Cachao for coming. Guess when the first he was here -- 1948 he played for President Harry Truman. (Applause.) Welcome back. (Applause.) We're sure glad you're here. Thank you all for coming. I want you to say hello to Yamile again, una más vez. (Applause.) We certainly pray for the speedy release of your husband, and we're glad you're here at the White House. No better place to come and recognize the great beauty of freedom. We want to thank you all for joining us as we celebrate the great diversity and freedom of the United States.