For Immediate Release
Office of the Press Secretary
October 5, 2007

THE PRESIDENT: I want to thank members of my economic team for coming in the Oval Office this morning to bring some good news here for America's families and America's working people. The -- last month our economy added 110,000 new jobs. And that's good news for people here in our country. It's an indicator that this economy is a vibrant and strong economy. 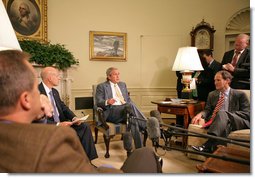 The folks briefed me on the fact that they are -- numbers for July and August were revised -- job numbers, job creation numbers. And this economy added 118,000 new jobs in July and August, as well. This means -- with these revisions, it means that we've had 49 consecutive months of job creation. And that's the longest uninterrupted job growth on record for our country.

You know, I am really pleased with the economic news, but I don't take good news for granted. I understand people are worried about their mortgage payments, or concerned about sending their child to college. I know that people are concerned whether or not they're going to have enough money to meet their needs. And so my call to the United States Congress is, keep taxes low. If you want this economy continue to grow, and if you want to reinforce the fact that we've got -- entrepreneurship is strong and people are working, don't raise taxes.

And I'm looking forward to working with the Congress to set priorities on how we spend the people's money, but I also am going to make it very clear to people in Congress that we're not going to raise their taxes on the working people.

I want to say something else. There's been a lot of talk in the newspapers and on TV about a program that I put in motion to detain and question terrorists and extremists. I have put this program in place for a reason, and that is to better protect the American people. And when we find somebody who may have information regarding an -- a potential attack on America, you bet we're going to detain them, and you bet we're going to question them -- because the American people expect us to find out information -- actionable intelligence so we can help protect them. That's our job.

Secondly, this government does not torture people. You know, we stick to U.S. law and our international obligations.

Thirdly, there are highly trained professionals questioning these extremists and terrorists. In other words, we got professionals who are trained in this kind of work to get information that will protect the American people. And by the way, we have gotten information from these high-value detainees that have helped protect you.