For Immediate Release
Office of the Press Secretary
October 4, 2007

President Bush Meets with Leader of the Parliamentary Majority in Lebanon, Saad Hariri
The Oval Office

PRESIDENT BUSH: It is my honor to welcome the honorable Saad Hariri here to the Oval Office. Saad is the Majority Leader in the Lebanese Parliament.

I told this courageous leader that the United States strongly supports the success of democracy in Lebanon; that we respect your country and that we understand the obstacles that you face. First, I was very impressed by the response of the government and Prime Minister Siniora in dealing with extremists and radicals; impressed by his willingness to have the Lebanese forces work for security in Lebanon, and so impressed that I asked Admiral Fallon to go to Lebanon to assess how we can further help the government and the forces protect themselves from radical elements who are willing to use violence and terror to achieve objectives. 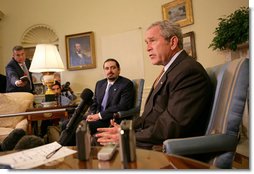 We talked about the upcoming presidential election, and I am deeply concerned about foreign interference in your elections. It is -- the message has been sent to nations such as Syria that they should not interfere in the election of the President. The international community has spoken, and we expect Syria to honor those -- that demand.

Saad Hariri suffered incredible tragedy when his good father was assassinated, killed in Lebanon. And as a result of that cold-blooded murder, the international community has demanded accountability. That tribunal is taking too long to get started. The international community must work more quickly to stand up this tribunal so people will be held to account. And not only that, this tribunal will send a clear message that there will be justice delivered for not only the murder of your dad, but for the murder of others that have taken place on the streets of Beirut.

You know, I admire your courage. This is a tough time. And I appreciate the fact that you care enough about the people of Lebanon that you're willing to work hard for peace and democracy and freedom. And I reiterate what I told you, is that the United States is more than just an admirer; we want to help as best as we possibly can.

So I welcome you here to the Oval Office.

MR. HARIRI: Thank you. I thank you, Mr. President, for the political and all the support that you have given Lebanon, from the international tribunal, from helping the security forces also, and fighting those terrorists in Lebanon. Also we in Lebanon have a very important constitutional presidential election that we don't want any foreign interference in this presidential election.