For Immediate Release
Office of the Press Secretary
October 1, 2007 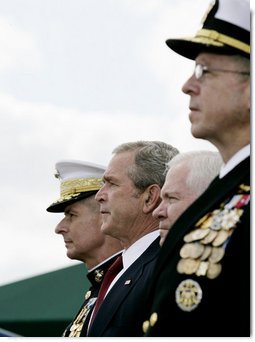 Admiral Mike Mullen comes to this post with a broad and unique range of talents and experience. Some of you may not know that his parents were highly-regarded members of the Hollywood community, who worked for some of the greatest entertainers of the day. Many people are surprised when told about the Admiral's show business roots. After all, he's humble, well-grounded, and filled with common sense. (Laughter.) Not exactly what one thinks about when they think of Hollywood values. (Laughter.)

Admiral Mullen left California to attend the United States Naval Academy to pursue a career in military service. He soon found himself stationed on a destroyer on the gun line off the coast of Vietnam. During that tour, Admiral Mullen was part of operations so intense that the gun barrels on his ship glowed red. That was the beginning of a distinguished career.

The Admiral has commanded three ships, an aircraft carrier battle group, and the U.S. Second Fleet. He served as the commander of all U.S. naval forces in Europe and the NATO Joint Force Command. And later, as Chief of Naval Operations, he championed the construction of new types of vessels needed to deal with the threats of the 21st century.

Admiral Mike Mullen understands what's at stake in the war on terror. He was on duty at the Pentagon when Flight 77 made its doomed plunge. He felt the plane slam into the building. He saw the carnage and devastation. And like all who worked there that terrible day, he still carries the pain and the loss. Admiral Mullen was there when war reached America's shore -- and he brings the talent, vision and judgment needed to help us fight and win that war.

As Chairman of the Joint Chiefs of Staff, Admiral Mullen will follow his strong belief that every member of our Armed Forces is, as he put it, part of "one team and one fight." He will continue to set a sterling example to our men and women in uniform. He will bring judgment and candor to decisions that may mean the difference between life and death for young Americans who are serving our nation. He will demonstrate the same love of country and dedication to duty that inspired his sons to follow him into military service. 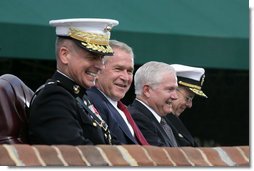 Admiral Mike Mullen is a man of decency and honor, and I congratulate you on your new assignment. And I know your parents would be proud. And I thank you and Deborah and Jack and Michael for your service to our nation. (Applause.)

As Admiral Mullen begins his service as Chairman, he is fortunate to have as an example the man we honor today. General Pete Pace is one of the most respected and accomplished military leaders I have ever known. He helped craft America's response to an unprecedented assault on our homeland. He helped liberate two nations from brutal tyrannies and helped bring freedom to millions of people. He began the process of transforming our military into a more efficient and effective force.

Yet these accomplishments do not begin to tell the full story of this remarkable man. That story begins in Teaneck, New Jersey, where General Pace grew up the proud son of an Italian immigrant. His dad worked two and sometimes three jobs to provide for his family. His mom attended church service every Sunday, and, according to the good General, still lights candles to pray that her children are happy, healthy and safe.

General Pace was a good student and a good athlete. His mom said the General has been good at everything he's ever done. Some of you may think mothers are required to say only admiring things about their sons. Well, take it from me, it's not always the case. (Laughter.)

General Pace's dad died before he could see his son reach the height of his career -- yet he always knew that his son would be a success. His family believed in his potential -- and they weren't the only ones. There is something about General Pete Pace that makes believers out of nearly everyone. That includes the men who served with him in Vietnam and whom he led during some of the most vicious urban combat in American military history. It includes the troops he led in Somalia who looked to him for resolve and guidance during difficult times. It includes Marines who look with pride on the first of their ranks to lead the Joint Chiefs of Staff. It includes two Secretaries of Defense who relied on the General during tough and trying times. And it includes a President who has counted on General Pace's candor and sound judgment during some of the most difficult times in our country's history. 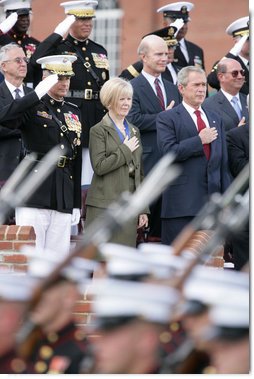 During his service at the Pentagon, General Pete Pace has shown us many talents. He's shown an intellect sharpened by post-graduate studies at George Washington and Harvard. He's shown us great oratorical skills -- this is a man who frequently speaks without notes -- I really don't recommend this to everyone. (Laughter.) He's shown a sharp wit. When a Naval commander once made an edgy joke in front of the Secretary of Defense, the General stepped right in and gave the young officer some advice. He said, "Never let a promising career stand in the way of a good joke." (Laughter.)

The most important attribute General Pete Pace has shown us is a quiet strength. It is a strength that has won the admiration of friends and peers. It is a strength built on the love and support of a strong and devoted wife, Lynne, and their family, Peter, Lynsey and Tiffany. It is a strength that gave Pete solace in the tough, and sometimes bitter, world of Washington, D.C. It helped him bring selflessness to a city filled with egos, and a dignity to a political process that might have worn down lesser men. He now leaves active service with a distinguished team in place and a talented successor. And yet I also have the sense that General Pace is not going to end it all here. He's a man who has always put country first and he will find new ways to serve.

General Pete Pace always understood what's important. It wasn't titles received, or honors bestowed -- and it certainly was not the good graces of official Washington. What mattered most were the young men and women who serve our country and risk their lives for its honored cause. He kept a picture on his desk of the first Marine who died under his command in Vietnam. He can still recite the names of all other Marines who died under that first command -- and because this is a man with a tender heart, sometimes it's hard for him to get through all the names without choking up a little bit. 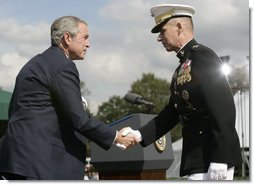 Pete has devoted his life to those who wear our country's uniform. And they are devoted to General Pace. They're among the hundreds who've received his advice and friendship. They're among the thousands who lined up at military bases during his final tour to shake his hand and wish him well and say goodbye. They're among the millions whose names he will never know but who will always remember him. And they include that single soldier who came up to the General on his last visit to the war zone. He looked at General Pace with gratitude, respect and pride, and said, "Thanks for your service. We'll take it from here."

General Pace, throughout your life, you have led those troops to honorable achievements and into the pages of history. Because of your example, you can know that with courage, valor and confidence, they will take it from here. 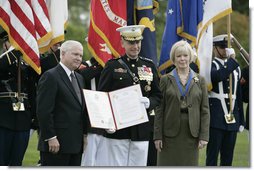 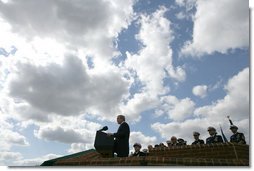