For Immediate Release
Office of the First Lady
September 28, 2007

MRS. BUSH: Thank you, Dr. Billington, and thanks to everyone at the Library of Congress for organizing this beautiful event, as well as the fabulous festival tomorrow. I want to urge everyone here, remember tomorrow is the day, from 10:00 a.m. in the morning till 5:00 p.m. tomorrow afternoon on the National Mall. Be sure to go there. You'll see all of your favorite writers. Be sure to take your kids, who will love having their picture with Clifford the Big Red Dog and all the other storybook characters that will be there. 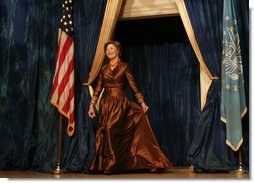 Welcome, everyone, to the 7th Annual National Book Festival. Thank you very much for coming.

Most of all, thank you to our authors. You're the reason we're here. In "The Tempest," Prospero observes: "My library was dukedom large enough." With a good collection of books, a reader can go to any place any time he pleases.

The authors with us this evening take their readers on journeys across America's history and landscape. They investigate the murder of an ex-con on the streets of Seattle, document the bravery of American G.I.s on the battlefields of World War II. They follow America's most famous assassin through the swamplands of Maryland and the forests of Virginia, and they guide us into the hearts of 12-year-old twin boys in Northampton County, North Carolina.

Shelia Moses takes her young readers on a journey through African American history -- from the inspiring story of Dred Scott, to the courage of blacks living in the segregated South. Shelia first gained recognition for her award-winning novel "The Legend of Buddy Bush." Since then, her work has earned her the Coretta Scott King Honor, and acclaim as a National Book Award Finalist. Today, Shelia will read from her most recent novel, "The Baptism."

James Swanson guides his readers through the life and times of our 16th President. Since the age of 10, James has studied and collected books, documents, art, and artifacts connected with Abraham Lincoln. Actually, James's ties to Lincoln started at his birth: He was born on Lincoln's birthday. Tonight, James will present his most recent book, "Manhunt: The 12-Day Chase for Lincoln's Killer." "Manhunt" is a thrilling, well-documented account of murder and intrigue, not to mention some fascinating American history.

Jeff Shaara's lively fiction takes his fans back in time to experience our country's momentous conflicts -- from the American Revolution, to the Civil War, to World War I. And through his work with the National Endowment for the Arts' Operation Homecoming program, Jeff helps soldiers returning from Afghanistan and Iraq document their own wartime experiences. Thank you, Jeff, for your commitment to our troops. And thank you for sharing your account of World War II, "The Rising Tide," with us this evening.

J.A. Jance brings her readers into the fast-paced world of her mysteries and thrillers. J.A. started collecting her material early: She's known that she wanted to be a writer since the 2nd grade. Since then, she's produced the best-selling J.P. Beaumont series, and the Joanna Brady series, which takes place in Southeastern Arizona of J.A.'s childhood. Tonight, J.A. will read from her latest J.P. Beaumont novel, "Justice Denied." Ladies and gentlemen, J.A. Jance. (Applause.)