For Immediate Release
Office of the Press Secretary
September 27, 2007

THE PRESIDENT: Today I'm joined by Secretary of Transportation Mary Peters, and the Acting Administrator of the FAA, Bobby Sturgell. I want to thank you all for coming. 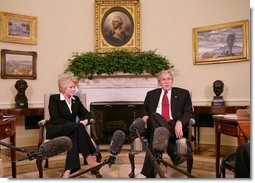 And the Secretary and I have been talking about what to do about it, and I've instructed her to report back to me as quickly as possible on two matters: One, to make sure that consumers are treated fairly and complaints are listened to, and that we address some of the egregious behavior that our consumers have been subjected to. Endless hours sitting in a airplane on a runway, and there's no communication between the pilot and the airport is just not right. And so Mary is going to work very hard to make sure the system is much more responsive.

The other issue, of course, is dealing with congestion. One of the reasons why consumers on airlines, airline passengers are being so inconvenienced is because the skies are too crowded. And there's some short-term things we're going to do, and Mary is going to report back to me about what those will be.

Also Congress needs to look at this FAA reauthorization -- I call it "modernization" -- and work with this department, and work with Bobby bringing our FAA into the 21st century, so that our consumers and passengers and citizens won't be inconvenienced with it.

We've got a problem, we understand there's a problem, and we're going to address the problem. Madam Secretary, I appreciate your willingness to do so.