For Immediate Release
Office of the Press Secretary
September 27, 2007

THE PRESIDENT: Thank you all. Please be seated -- unless you don't have a chair. (Laughter.) I welcome you to the White House. I have the honor of signing a bill that will help millions of low-income Americans earn a college degree. I'm really looking forward to signing this bill. I love the fact that this country is dedicated to helping people who want to realize a dream. 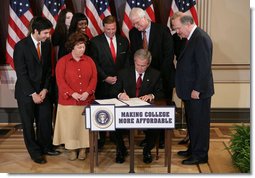 The College Cost Reduction and Access Act expands one of America's most important and successful education initiatives -- the Federal Pell Grant Program. For the last six years, I've worked to make sure that we expand Pell Grants; I know members of Congress feel the same way. Pell Grants give young people a chance to pursue their dreams. They give our fellow citizens the chance to build a better future.

The bill also takes important steps to put higher education within reach for more of the men and women who wear our nation's uniform. I want to thank the Congress for answering this call. I appreciate your hard work on this piece of legislation and I'm looking forward to signing the bill.

I want to thank the Secretary of Education for her hard work. Margaret Spellings is dedicated to making sure every child can learn and every child can realize dreams. I want to thank you for establishing the Bipartisan Commission for the Future of Higher Education. The commission engages students and families and policymakers and business leaders in the academic community on ways to improve higher education and to make it more affordable and accessible. I appreciate you taking that on, Margaret.

I want to thank Congressman George Miller, from California, who has joined us. He happens to be the Chairman of the House Education and Labor Committee. When George puts his mind to getting something done, he can get it done. I'm about to call to -- get him to -- call him to get this No Child Left Behind Act reauthorized. (Laughter.) But I don't want to mix messages early in the speech. (Laughter.)

I thank Congressman Ric Keller, from Florida, and Congressman John Spratt, who is the Chairman of the House Budget Committee. I'm honored you all joined us. Members of the Senate need to be thanked, as well: Senator Ted Kennedy, Mike Enzi, Orrin Hatch, and Lamar Alexander. They were going to be here, but they got votes on the Senate floor, so they're here in spirit.

I want to thank the students who have joined us today; I appreciate you all being here. These are Pell Grant recipients. We believe it's important to put a face behind what it means to get a Pell Grant. In other words, every one of these folks up here is benefiting from the Pell Grant, so he or she can realize their dreams. That's what America is all about, isn't it?

The other things is, this is a practical approach to dealing with the fact that we're -- live in an age in which technology is transforming the way we live and work. In order for our citizens to be able to seize the opportunities of a new era, they're going to have to have skills that can be only learned through a post-secondary education. That's the realities of the world in which we live. According to one study, 80 percent of the fastest-growing jobs in America require some sort of education after high school. Times are changing when we were -- the baby boomers like me were younger -- it's a different era. We're living in a global economy. And we've got to stay competitive as we head into the 21st century, and the best way to stay competitive is to make sure people have access to good education.

One of the best ways to make higher education affordable is through Pell Grants. Pell Grants make it possible for people from all walks of life to afford a college education. Pell Grants send an important message to students in need: If you work hard, and you stay in school, and you make the right choices, the federal government is going to stand with you. That's what a Pell Grant says.

With us today are a number of young Americans whose lives have been transformed -- I'm going to mention two. Robert Garcia -- I'm mentioning him because he's a remarkable story, but also he happens to be from Texas. (Laughter.) His family struggled financially. Robert's mom sacrificed mightily to get him a good education. By the way, that happens all across our country. Parents are sacrificing mightily to make sure their children can realize a dream. With her support -- with his mom's support, he became a leader in his high school band and he graduated 5th in his class.

A Pell Grant made it possible for Robert to go to the University of Texas, where he has just begun his junior year. The lowest grade he's made so far in college is B. That sets him apart from the President. (Laughter.) Robert wants to use his education to get involved in public policy, so he can help at-risk youth. Here's what Robert says: "The Pell Grant has saved my life." That's got to make us feel good, to hear that. "The Pell Grant has saved my life. They've provided me with everything I need to survive -- living expenses, tuition, books, and food. Without the Pell Grant, I wouldn't be here."

Kalise Robinson -- she grew up in Washington, D.C. She was shuffled through the foster care system and she was mistreated for much of her childhood. But she never lost her spirit. She was struggling to support her children, and she asked for help, and she found it from a community outreach group. They helped her find shelter, and she got a GED. In 2005, with the help of a Pell Grant, Kalise entered the University of District of Columbia. She currently has a 3.3 grade point average -- and when she graduates she wants to help somebody else. Kalise says: "I came from a rough life. The Pell Grant helped me. Wherever I go, I tell people that there are options out there for you. If you work hard, there is help and money out there for you." We thank you both for being here. Thank you all for coming, too.

Today is a reaffirmation of our commitment, our determination to help more Americans realize dreams by getting a good education. The bill I sign today increases funding for Pell Grants by $11.4 billion over the next five years. It allows us to increase the maximum award from $5,400 -- to $5,400 by 2012. These are positive steps, and they're good steps. I wish we could make the Pell Grant process last year round. I think it would be helpful. I want to work with members of Congress to see if we can't get that done. That recognizes the realities for Pell Grant recipients.

The bill also helps ease the burden on men and women in uniform who have taken out loans for higher education. We believe that when you're wearing the uniform we need to help you; that you're making a sacrifice, and it's okay for the government to help you in dealing with your loans when it comes to higher education. And so those on active duty military will now have new flexibility to defer payments on their loans.

These are important steps. This bill does, however, create new and duplicative programs that divert resources from the Pell Grants. This bill makes some spending commitments that aren't paid for yet, and I look forward to working with the Congress to ensure Pell Grant increases that are not fully funded in this bill are paid for with offsets in other areas. And we're going to continue working with Congress to make sure the Pell Grants stay strong.

I also do want to mention No Child Left Behind, if you don't mind, Mr. Chairman. (Laughter.) Chairman Miller was one of the main reasons why this bill got off the House floor in the first place. He's one of the main leaders who made sure the bill got to my desk.

And the reason I bring it up is, in order to make sure we've got more children ready for college, the No Child Left Behind Act needs to be reauthorized and strengthened. Just this week we saw what happens when you have high standards and you measure, measure for results. Those results were reported out through the Nation's Report Card. About 700,000 people were tested nationwide to determine whether or not standards are being met. Eighth graders achieved their highest scores ever in math, while 4th graders set records in both reading and math; African American and Hispanic students posted all-time highs in a number of categories. In other words, that achievement gap is beginning to close in America. It's something that we all want to see happen.

There is nothing more important than making sure our children get a good education. Today we've taken an important step in that direction. I'm hoping we can get the No Child Left Behind Act reauthorized and strengthened. I appreciate the members being here today. I thank you for your hard work on this. I'm honored to sign this piece of legislation, the College Cost Reduction and Access Act.