For Immediate Release
Office of the Press Secretary
September 26, 2007

President Bush Meets with President Karzai of Afghanistan
The Waldorf-Astoria

PRESIDENT BUSH: Mr. President, welcome back to the states. It just seemed like yesterday we were at Camp David.

PRESIDENT BUSH: We had a fruitful set of discussions there and we've had some this morning.

First of all, I thank you for your courage and your leadership. I appreciate your full understanding that a government that responds to its people is a government that is -- provides hope and opportunities. I thank you for the progress report you've given me. This country has gone from a brutal tyranny, where women and girls were repressed, to a country where women and girls have hope. The department has got strong women in the ranks; young girls are going to school, health care is now available -- 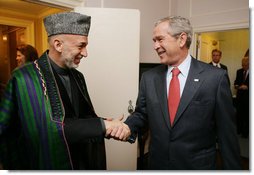 PRESIDENT BUSH: -- child mortality rates are down. And this is a tribute to you and your government, the people of Afghanistan's desire to live in peace. It's in the interest of the United States that we continue to help you. It's in our security interests that this democracy flourish because if freedom takes place in Afghanistan, it will set an example of what's possible in other parts of the broader Middle East. When people see that there's hope in a part of the world that had been ravaged by war, had been terrorized by brutal extremists; when people realize there's a different way of life, they'll demand the same thing -- in other words, it's peace that we all want and it's liberty that will help us keep that peace.

So Mr. President, you've got strong friends here. I appreciate your courage. As you know, every time we meet, I ask you, are you making progress, are more children going to school, are more health care clinics operating, are the security forces more capable of dealing with the extremists? I expect progress and you expect progress, and I appreciate the report that you have given me today. So thank you and welcome.

PRESIDENT KARZAI: Thanks very much, Mr. President. As always, thank you for the great hospitality that you have always given the Afghan people, and in person, to my delegation. Camp David was a lovely place -- I wish one could stay there longer sometime in the future. (Laughter.)

Afghanistan, indeed, has made progress, and Mr. President, that should be a tribute to you, your leadership and the American people for all that we have achieved in Afghanistan, especially the thing that you mentioned, reduction in child mortality -- from a country that was the worst in the world to a country that's coming down and saving 85,000 lives, especially this year, of children under five; and for a country that was self-sufficient 40 years ago in zero production to becoming again self-sufficient in the production of food after the years of drought, misery and want, and the roads and education and the Afghan flag flying around the world.

So there is an endless list for which we have to be grateful to you. And most important of all, Mr. President, something that we tend to forget from time to time: the liberation of Afghanistan, such an important thing for the Afghan people. I don't know if you feel it in the United States, but we feel it so immensely in Afghanistan that we are now, once again, a free country, liberated from the grips of terrorism and al Qaeda and their associates. And we love our flag flying around the world -- I love to see it in this room, by the way. (Laughter.) Thank you very much.