For Immediate Release
Office of the Press Secretary
September 25, 2007

PRESIDENT BUSH: Mr. President, thank you. And thank you for convening this meeting of the United Nations Security Council. I appreciate the opportunity to join you. And I appreciate your focus is -- your focus on the challenges to peace and security in Africa, particularly in Sudan and Darfur.

The reason I say that is my nation has labeled what's taking place in Darfur as genocide, and when we find genocide it's time to do something about it. Time is of the essence. And so, Mr. President, you're focusing our attention on this crucial matter. 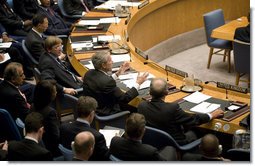 I want to thank the Secretary General, as well, for your support of the people of Darfur. I appreciate your determination to make relieving their suffering a priority of the United Nations.

And I want to thank Chairperson Konar for the leadership of the African Union. After all, you deployed 7,000 troops. But 7,000 troops is not enough, if you believe what's taking place on the ground is genocide. Maybe some don't think it's genocide, but if you've been raped, you think it's -- your human rights have been violated. If you're mercilessly killed by roaming bands, you know it's genocide. And the fundamental question is, are we, the free world, willing to do more? You've made a strong effort, and we appreciate you. But you know better than me that the area of Darfur is bigger than France, or Texas, and both are plenty big for 7,000 troops.

Your Excellencies, the fighting in Darfur between the rebels and the government continues. Two hundred thousand people have lost their lives -- 200,000 innocents are no longer with us. More than 2 million people have been forced from their homes. They're fleeing the violence. And they go into refugee camps, and they head into neighboring countries like Chad and Central African Republic.

That's why I appreciate your leadership, Mr. President, to help these countries help these refugees. The resolution adopted today addresses the plight of the refugees in Chad and Central African Republic. In other words, it's a step in the right direction. It's a practical solution to a big problem. It's a part of a grand solution, Mr. President. That's why your leadership is appreciated.

The resolution authorizes the deployment to these two nations of a robust European peacekeeping force and several other police and military advisors. This U.N. mission is going to help national and local governments exercise sovereignty over their territory. It's going to allow workers to deliver humanitarian aid. That makes us feel good. We're spending $2 billion so far on providing aid, and we want to make sure our aid gets to the people who need help.

And that's why the United States strongly supports the resolution and the mission. We continue to support swift implementation of existing resolutions of this Council. We want the words of this Council to mean something. We want it to be said, when the Council speaks on behalf of suffering people, those words will be followed by action.

And so we call on the government in Khartoum to facilitate the deployment of a robust U.N. peacekeeping force to save life. We call on all parties to cease arm sales to the combatants. We expect people gathered around this table to send a focused message that innocent life matters. We expect President Bashir to observe a cease-fire during next month's peace talks, and we want the rebels to do the same.

We're tired -- the message has got to be, we're tired of people trying to escape the noose of pressure. We want the pressure to be uniform. Why? Because we believe in universal freedom and peace.

The conflict in Darfur has claimed too many lives, and there's too much suffering. The innocent victims of this conflict want only to return to their homes. They want to live in peace. And it's our duty to help them realize that dream.