For Immediate Release
Office of the Press Secretary
September 25, 2007

We talked about a lot of issues, and spent time talking about reconciliation and law. And the Prime Minister and the Speaker are dedicated to getting good law out of the assembly. And the political parties in Iraq must understand the importance of getting these laws passed. Some politicians may be trying to block the law to gain special advantage. And these parties have got to understand that it's in the interests of Iraq to get good law passed. And so I want to thank you for you're dedication and your commitment to laws that will help this young democracy reconcile and move forward. 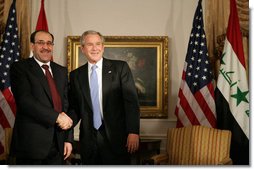 The Prime Minister and I have talked about a variety of concerns. And I assured him we want his security forces well-trained, mobile and capable of handling Iraqi security on their own. I have made it clear to the American people that our troop levels will depend upon success. When General Petraeus reported to the country, you know, I talked about troops coming home based upon success. And success in Iraq is important to the future of our country, it's obviously important to the people of Iraq.

You're sitting in a vital region and when you succeed -- which I'm confident you will -- it'll send a message to other people who believe in peace. It'll make it easier for people to grow up with a hopeful future in the Middle East. When that happens, it makes America more secure. If we were to leave before the job is done, chaos could ensue, innocent people would lose their life, extremists would be emboldened; nations that are worried about the United States would -- about our commitment, would lose their nerve; the countries of the Middle East would be endangered, and that would cause America to be endangered, as well.

PRIME MINISTER MALIKI: (As translated.) Thank you very much, Mr. President. I am grateful to be here with you. I thank you for the meeting with your distinguished delegation and with my delegation.

During the meeting with the President we have reviewed a number of issues. We have discussed a variety of issues. All of them are common issues that we strongly believe that they represent the mutual goal that we have, the mutual goal of confronting and defeating terrorism, as well as building and continuing to build the Iraqi institutions and the Iraqi government.

The Iraqi side is fully prepared to assume all the responsibilities and to work for a better future for all of Iraq. We have made it very clear and emphasized that the future of Iraq goes through the gates of national reconciliations, of political agreements. That is the way to make the states and that's the way to ensure and assure the future of Iraq.

The task before us is gigantic. We have succeeded in ridding Iraq of the dictatorship and the regime that governed there. Now we have another challenge, which is to get rid of terrorism, terrorist organizations. The road will be long; it requires cooperation and the international community in order to uproot terrorism and secure a better future for everyone.

We believe and we feel that there is a development and progress that's happening every day in our political life, in the way to manage and administer the country in the security situation. Of course, as the President referred, also we have some spending legislations that we will continue to exert every possible efforts to have those spending legislations passed. They've been sent to the Iraqi parliament. But also we continue to work on the basis of the existing law and we continue to work to have those legislations passed.

We also discussed the importance of the region where we live. It is a vital region. It is important for Iraq and the region to be away from conflicts, to have a safer region and a safer Iraq, and to uproot terrorism in that part of the world and in that country. Iraq's security is very important and we have talked about the importance of mutual respect between our two sides and working together for our mutual goals. We have a great deal of confidence that we will be victorious.