For Immediate Release
Office of the Press Secretary
September 17, 2007 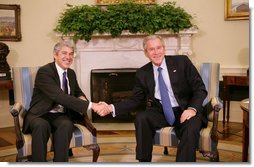 And I thank you very much for the comprehensive dialogue we've had on issues of common concern as the -- in your role as the -- at the EU. First we discussed and confirmed that transatlantic relations are very important for the United States and the EU. And the Prime Minister said he wants to work closely with the United States, and I said I want to work closely with the Prime Minister to keep the transatlantic ties very strong.

Secondly, we talked about issues like Darfur, Doha. We talked about Kosovo and the Middle East. And both of us are committing to working together to see if we can't solve those problems, or at least put them in a better position.

And so, Mr. Prime Minister, you're welcome here any time. I appreciate that you're setting such a good example for people in your own country and around the world by being an avid exerciser at the ripe old age of 50. And you're welcome to come to the Oval Office again.

PRIME MINISTER SÓCRATES: Thank you, Mr. President. It was a very sympathetic conversation with you. And thank you for the invitation and the opportunity to present to you what are the priorities for Europe in the months ahead. In particular, we had the opportunity to discuss the transatlantic relation, and importance to Europe on the relation with the United States. As a matter of fact, I don't see any strategic question for the world that don't demand, require the most -- better relations with Europe and United States.

And thank you also for the opportunity to discuss some of our more delicate matters in the international agenda, mainly the question of Kosovo and the Middle West [sic] problem. I had the opportunity to tell the President how Europe can see with good (inaudible) the declaration on Middle East of President Bush, the nomination of Tony Blair. And we are feeling that the peace process is moving, and it's very good for Middle East, of course, for Europe, and for the world.

Also our discussions about Kosovo show that the cooperation between Europe and the United States is very important for safety and for stability in the world. And I guaranteed to the President that the first priority I have in my mind regarding Kosovo is keep Europe united. And we will do my [sic] best in order to face the delicate problem, but important for Europe in order to show a strong and united Europe.

Well, thank you very much.

PRESIDENT BUSH: Thank you, sir. Thank you all very much.