For Immediate Release
Office of the Press Secretary
September 17, 2007

THE PRESIDENT: Good morning. I'm pleased to announce my nomination of Judge Michael Mukasey to be the 81st Attorney General of the United States. Judge, thank you for agreeing to serve. 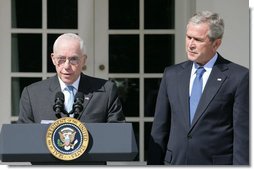 Judge Mukasey brings impressive credentials to this task. In 1987, he was nominated by President Ronald Reagan to the United States District Court of the Southern District of New York. It's one of the country's busiest and most respected trial courts. He sat on that court for more than 18 years, and he earned the reputation as a tough, but fair judge. For six of those years he was the chief judge, and he was a sound manager and a strong leader. Throughout his time on the bench, Judge Mukasey was widely admired for his brilliance and his integrity.

Mike has experience in the Justice Department and private practice, as well as having served on the bench. He served four years as an Assistant United States Attorney in Manhattan, where he tried many cases and he developed expertise in the workings of the criminal justice system. He's also worked as a partner in a law firm, and he holds degrees from Columbia University and Yale Law School.

Some of Judge Mukasey's most important legal experience is in the area of national security. Judge Mukasey presided over the trial of the terrorist known as "the Blind Sheikh," and his co-defendants in the conspiracy to destroy prominent New York City landmarks, including bombing of the World Trade Center in 1993.

Before the 9/11 attacks, this was one of the most important terrorism cases in our nation's history, and the verdict in that case was affirmed on appeal. In affirming the convictions, the appeals court signaled out the judge for praise. I found it very interesting what they said. Here's what they wrote: "The Honorable Michael B. Mukasey presided with extraordinary skill and patience, assuring fairness to the prosecution and to each defendant, and helpfulness to the jury. His was an outstanding achievement in the face of challenges far beyond those normally endured by a trial judge."

When the World Trade Center was attacked again, Judge Mukasey quickly reopened his court, even though it was just blocks from Ground Zero. He recognized the importance of maintaining a functioning justice system in the midst of a national emergency. He and other judges in his district worked day and night to ensure that applications for warrants were processed, investigations could proceed, and the rule of law was upheld. 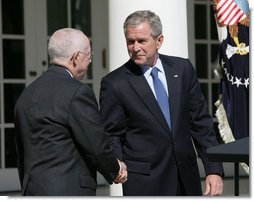 Judge Mukasey is clear-eyed about the threat our nation faces. As a judge and a private lawyer, he's written on matters of constitutional law and national security. He knows what it takes to fight this war effectively, and he knows how to do it in a manner that is consistent with our laws and our Constitution. And when confirmed by the Senate as Attorney General, he will work to ensure that our law enforcement and intelligence officers have the tools they need to protect the United States and our citizens.

When he takes his place at the Department of Justice, he will succeed another fine judge, Alberto Gonzales. From his days as a Supreme Court Justice in Texas, to his years as White House Counsel and as Attorney General of the United States, this honorable and decent man has served with distinction. I've known Al and his family for more than a decade. He's a dear friend and a trusted advisor. I will miss him and I wish Al and Becky all the best.

With Mike Mukasey, the Justice Department will be in the hands of a great lawyer and an accomplished public servant. Mike has shown good judgment in the courtroom, he's shown good judgment outside the courtroom. After all, he married a teacher. And we welcome Susan here, as well as son Marc and daughter Jessica. Thank you all for coming. He's also brought his sister, Rhoda, and brother-in-law Norm. I want to thank you all for supporting Mike as he takes on this important responsibility for our country.

It's a pivotal time for our nation, and it's vital that the position of Attorney General be filled quickly. I urge the Senate to confirm Judge Mukasey promptly. Until the Judge is confirmed, Assistant Attorney General Paul [sic] Keisler will serve as acting Attorney General. Accepting this assignment requires -- Peter -- I said -- Peter Keisler. Accepting this assignment requires Peter to delay the departure date he announced earlier this month, and I appreciate his willingness to do so. Peter is the acting Attorney General. Paul Clement, who agreed to take on this role, will remain focused on his duties as Solicitor General, so he can prepare for the Supreme Court term that begins just two weeks from today.

Judge, I'm grateful for answering our nation's call to serve. I look forward to welcoming you as the next Attorney General of the United States.

JUDGE MUKASEY: Thank you, Mr. President. I am, of course, deeply honored to be selected as the nominee for Attorney General of the United States. Mr. President, I am also grateful to you for giving me the chance to return to the department of Justice where I served early in my career.

The department faces challenges vastly different from those it faced when I was an assistant U.S. attorney 35 years ago. But the principles that guide the department remain the same -- to pursue justice by enforcing the law with unswerving fidelity to the Constitution. I have always had great respect for the men and women who follow those principles day in and day out in all the constituent branches of the department. My fondest hope and prayer at this time is that, if confirmed, I can give them the support and the leadership they deserve.

This morning I received a congratulatory call from the man I've been nominated to succeed, Alberto Gonzales, and I appreciate his support and encouragement.

I said a moment ago that the challenges the Department faces are vastly different from those we confronted 35 years ago. Less than a week ago, we marked a solemn anniversary that reminds us, if we need reminding, of how different those challenges are. Thirty-five years ago, our foreign adversaries saw widespread devastation as a deterrent; today, our fanatical enemies see it as a divine fulfillment.

But the task of helping to protect our security, which the Justice Department shares with the rest of our government, is not the only task before us. The Justice Department must also protect the safety of our children, the commerce that assures our prosperity, and the rights and liberties that define us as a nation.

I look forward to meeting with members of Congress in the days ahead, and if confirmed, to working with Congress to meet our nation's challenges. Thank you very much.