For Immediate Release
Office of the Press Secretary
September 8, 2007

PRESIDENT BUSH: I not only had breakfast with my friend, I just had a very constructive bilateral discussion on a variety of issues. We, of course, discussed concern about climate change, our regional* concerns. We talked about energy security. We talked about Iran.

But mostly, I want to thank the Prime Minister, his government and the Japanese people for their contribution in the war against terror. The role that Japan plays in this fight is a vital role, and it's a necessary role. Japan provides a vital service not only to the United States, but to other countries as a refueler of our ships. And I thank you for that, Mr. Prime Minister, and I thank the Japanese people for that, as well.

The fact that we're in a war against extremists was heightened today by the release of a tape. The tape is a reminder about the dangerous world in which we live, and it is a reminder that we must work together to protect our people against these extremists who murder the innocent in order to achieve their political objectives.

I found it interesting that on the tape Iraq was mentioned, which is a reminder that Iraq is a part of this war against extremists. If al Qaeda bothers to mention Iraq it's because they want to achieve their objectives in Iraq, which is to drive us out and to develop a safe haven. And the reason they want a safe haven is to launch attacks against America, or any other ally. And therefore, it's important that we show resolve and determination, to protect ourselves, to deny al Qaeda safe haven, and to support young democracies, which will be a major defeat to their ambitions.

So, Mr. Prime Minister, thank you for being here. I'm proud to call you friend.

PRIME MINISTER ABE: (As translated.) I'm very happy that we were able to have a very nice meeting today, George. Following on to the trilateral breakfast that we had among three countries, Japan, Australia, and the United States, together the two of us were able to have a very useful or meaningful discussion on various areas, including the political, economic, and security and climate change, all these areas. And we agreed to further strengthen the irreplaceable alliance that we have between our two countries.

And Japan and the United States agreed to cooperate so that we can build an effective framework for addressing the problem of climate change. And we agreed the importance for the international community to be -- stay united in the fight against terrorism, which is still ongoing. And we also agreed on the importance of the Japanese-American refueling operation in the Indian Ocean.

We not only agreed to strengthen our bilateral relationship as allies, but we also agreed to cooperate closely in attacking* the various issues that faces the international community. 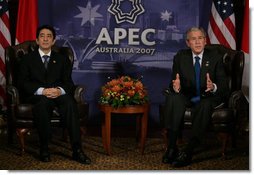 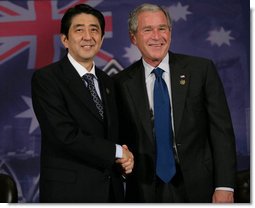