For Immediate Release
Office of the Press Secretary
September 3, 2007


THE PRESIDENT: -- (in progress) - as reinforcements. And together with the brave Iraqis, we've gone into al Qaeda strongholds and have driven them out.

Today, Anbar is a really different place. The level of violence is down, local governments are meeting again, police are more in control of the city streets, and normal life is returning. The people of this province are seeing that standing up to the extremists is the path to a better life, that success is possible. And soon I'm going to meet with some of the leaders here in Anbar province who have made a decision to reject violence and murder in return for moderation and peace. 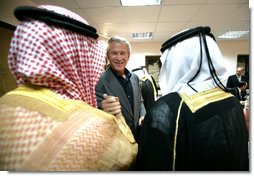 I'm looking forward to hearing from the tribal leaders who led the fight against the terrorists and are now leading the effort to rebuild their communities. I'm going to speak with members of Anbar's Provincial Council, which has reestablished itself and returned to the capital city of Ramadi. I'm going to reassure them that America does not abandon our friends, and America will not abandon the Iraqi people. That's the message all three of us bring.

Earlier, we just met with the leaders of Iraq's national government: President Talabani and Prime Minister Maliki, Deputy Prime Minister Barham Saleh, Vice President Abdul Mahdi, Vice President Hashimi and President Barzani of the Kurdish region. We had a good, frank discussion. We share a common goal: a free Iraq, that has a government that responds to the people. The government they represent, of course, is based in Baghdad -- but they're here in Anbar because they know the success of a free Iraq depends on the national government's support from the bottom up. They know what I know: that when you have bottom-up reconciliation like you're seeing here in Anbar, it'll begin to translate into central government action.

The national government is sharing oil revenues with this province, and that's a positive development. The challenges are great, and I understand the pace of progress is frustrating. It's frustrating for the American people; it's frustrating for the Iraqi people. These people are working under difficult circumstances, after having lived under the thumb of a brutal tyrant. Iraq's local and national leaders are working to ensure that the military success in places like Anbar is quickly backed up by real improvements in the lives of ordinary Iraqis. That's what we discussed today. Secretary Gates, Secretary Rice and I discussed with the Iraqi leaders that there has been some security success, and now it's important for government to follow up.

Our troops and diplomats and civilian experts will support the Iraqis in these efforts as they follow up. General Petraeus and Ambassador Crocker gave us an update on how things are looking. They gave us an update on the way forward and I was pleased with what I heard. The strategy we put into place earlier this year was designed to help the Iraqis improve their security so that political and economic progress could follow. And that is exactly the effect it is having in places like Anbar. 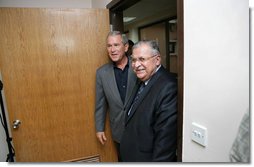 We can't take this progress for granted. Here in Anbar and across Iraq, al Qaeda and other enemies of freedom will continue to try to kill the innocent in order to impose their dark ideology. But General Petraeus and Ambassador Crocker tell me if the kind of success we are now seeing continues, it will be possible to maintain the same level of security with fewer American forces. These two fine Americans will report to Congress next week, and I urge members of both parties in Congress to listen to what they have to say. Congress shouldn't jump to conclusions until the General and the Ambassador report.

When you stand on the ground here in Anbar and hear from the people who live here, you can see what the future of Iraq can look like. That's why members of Congress from both parties who have visited Iraq have come back encouraged by what they have seen. For all the differences over the war, we can agree on what's working. And we can agree that continuing this progress is vital to making the strategic interests -- vital in meeting the strategic interests of our nation. It's vital to bring in -- it's vital that we work to bring America together behind a common vision for a more stable and more peaceful Middle East.