For Immediate Release
Office of the Press Secretary
August 31, 2007

THE PRESIDENT: Thank you. Good afternoon to you.

Tony Snow informed me he's leaving. And I sadly accept his desire to leave the White House, and he'll do so on September the 14th. He is -- it's been a joy to watch him spar with you. He's smart, he's capable, he's witty. He's capable of -- he's able to talk about issues in a way that the American people can understand. 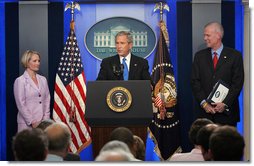 And I don't know what he's going to do -- I'm not sure he does yet, either. But whatever it is, it's going to be -- two things: One, he'll battle cancer and win. And secondly, he'll be a solid contributor to society.

I do want to thank Jill and Kendall, Robbie and Kristi. They have watched a man they love take on a big job, and at the same time, fight disease -- with a lot of courage. And so I accept, I love you, and I wish you all the best.

And so I had to make a choice, who to replace Tony, and I've chosen Dana Perino. I did so because Dana is a smart, capable person who is able to spell out the issues of the day in a way that people listening on TV can understand. She can handle you all. She's capable of handling your questions.

THE PRESIDENT: She has? Good. Okay. I'm glad to get a little -- I'm glad to get that choir singing. (Laughter.) So I'm not worried about her standing here at the podium. What I look for in somebody like Dana is somebody who will walk in that Oval Office and give me sound judgment and good advice. And I have found that over the course of the time I've known her she's capable of doing that. And she's also capable of running the shop that she'll be in charge of.

Q You've lost a lot of members in your administration --

THE PRESIDENT: Hold up. (Laughter.)

MR. SNOW: Just a couple of quick comments. First, Mr. President, thank you and thanks for the honor of serving. This job has really been a dream for me and a blast. I've had an enormous amount of fun and satisfaction, and I'm proud to be working for you, and will continue after I leave working for the White House, to speak out about issues I care about.

I'm also proud and happy that Dana will be taking over as Press Secretary. She's an enormously capable woman, as you know, and somebody who more than capably filled my shoes while I was away on surgery, and somebody who really is -- as I told her before, she's going to find out talents that she wasn't even aware of. But I think this is one of those wonderful times where somebody who works very hard in public life and has demonstrated extraordinary capability is going to have an opportunity to serve a President. And I think she'll have every bit as much fun and fulfillment in this job as I have.

Thank you, Mr. President, and Tony. I am honored to have been asked and delighted to accept the position. It is bittersweet, of course, because we are all going to miss Tony Snow very much. And he mentions filling shoes, and I've said before, he leaves very big shoes to fill, and I only wear a size 6.

And I thank him for all he's done for us in the administration. He's given us a lot of laughter, even at 6:30 a.m. in the morning when we meet every day. And while I'm saddened to see you go, I'm very happy for your family. You are their biggest champion, and everyone that's watched you fight this cancer is inspired, and the way that you lead your life is one with optimism, and we all should follow your lead.

Over the years, since Scott McClellan hired me to be his deputy, I've gotten to know a lot of you in the room, and there's also a lot of new faces in this room. And we do have quite a bit of time left. The President has a very ambitious agenda. We are a nation at war, and the press office, the whole team, is going to be here to help support him sprint to the finish.

I have an open-door policy. I hope to see a lot of you upstairs -- would love to see more of your faces, rather than just the emails.

And, Mr. President, thank you for your guidance, and I appreciate all you've done for me and the confidence you've placed in me, and I aim to live up to your expectations.

Q How do you feel about losing everybody?