For Immediate Release
Office of the Press Secretary
August 27, 2007

THE PRESIDENT: This morning, Attorney General Alberto Gonzales announced that he will leave the Department of Justice, after two and a half years of service to the department. Al Gonzales is a man of integrity, decency and principle. And I have reluctantly accepted his resignation, with great appreciation for the service that he has provided for our country. 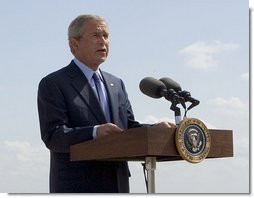 As Attorney General and before that, as White House counsel, Al Gonzales has played a role in shaping our policies in the war on terror, and has worked tirelessly to make this country safer. The Patriot Act, the Military Commissions Act and other important laws bear his imprint. Under his leadership, the Justice Department has made a priority of protecting children from Internet predators, and made enforcement of civil rights laws a top priority. He aggressively and successfully pursued public corruption and effectively combated gang violence.

As Attorney General he played an important role in helping to confirm two fine jurists in Chief Justice John Roberts and Justice Samuel Alito. He did an outstanding job as White House Counsel, identifying and recommending the best nominees to fill critically important federal court vacancies.

Alberto Gonzales's tenure as Attorney General and White House Counsel is only part of a long history of distinguished public service that began as a young man when, after high school, he enlisted in the United States Air Force. When I became governor of Texas in 1995, I recruited him from one of Texas's most prestigious law firms to be my general counsel. He went on to become Texas's 100th secretary of state and to serve on our state's supreme court. In the long course of our work together this trusted advisor became a close friend.

These various positions have required sacrifice from Al, his wife Becky, their sons Jared, Graham and Gabriel, and I thank them for their service to the country.

After months of unfair treatment that has created a harmful distraction at the Justice Department, Judge Gonzales decided to resign his position, and I accept his decision. It's sad that we live in a time when a talented and honorable person like Alberto Gonzales is impeded from doing important work because his good name was dragged through the mud for political reasons.

I've asked Solicitor General Paul Clement to serve as Acting Attorney General upon Alberto Gonzales's departure and until a nominee has been confirmed by the Senate. He's agreed to do so. Paul is one of the finest lawyers in America. As Solicitor General, Paul has developed a reputation for excellence and fairness, and earned the respect and confidence of the entire Justice Department.