For Immediate Release
Office of the First Lady
August 27, 2007

MRS. BUSH: Thank you all. Thank you very much. Thanks, everyone. Thanks for coming out today. Thanks so much, and thank you, Mary. Mary Bomar, as all of you know, is the Director of the National Park Service, and she's done a really terrific job, including working with Secretary Kempthorne, someone from Idaho, who now is the Secretary of the Interior, and who's very, very aware of the specific treasures we have in the western part of the United States and our national parks, but also the treasures everywhere across our country that represent the very best, both of our most beautiful natural landscapes like Grand Teton, and our most important historical sites like the White House and many other of our national parks that are historical sites. 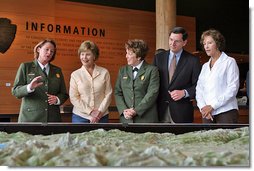 Mary and Secretary Kempthorne have been working very diligently on this idea of the Centennial Challenge, which is the challenge to our Congress, as well as to the American people, for the ten years leading up to the centennial of the National Park Service in 2016.

Mary Bomar, I want to thank you so much for working so hard on this challenge. I want to also thank Senator John Barrosso that's here with us. Both the Senate and the Congress will be hearing from a lot of the people from Interior and the national parks as we try to get this centennial park challenge passed through Congress.

I want to thank all the board members here from the Grand Teton Association. Thank you for what you do for this specific park. And then, of course, all of the people from the National Park Foundation board who happen to also be in town, and have worked so hard with every single park and are the philanthropic partners of each of the separate parks' associations.

Thank you all very much for joining me today, and a special thanks to the Junior Rangers and to their parents, who brought them here to the park. Thank you all for coming out today.

Mary, thank you so much. It's great to meet our superintendents. I've had the chance to get to know park rangers all over the country, and our park rangers are so terrific. What they do for us, as Americans, and for our beautiful sites is very, very important. It's a job I want to encourage young people to think about. I'm not sure people really consider being park rangers anymore, and we're desperate to have great people working in our parks. So I hope that some of these Junior Rangers will grow up and become real park rangers. And I hope -- that's one of the good messages of the Junior Ranger program. 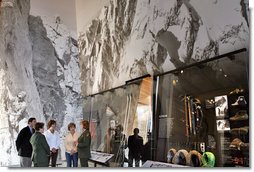 All of us can remember the first time we were amazed by a national park. My closest national park, when I was growing up in Midland, was Carlsbad Caverns, New Mexico. That was the park my mother, as my Girl Scout leader, and George's mother, as his Cub Scout leader drove the scout troops to, and we would visit the Carlsbad Caverns. That was my very first park that I remember the most. And then since then, I've had the opportunity to visit many, many of our parks. And in fact, as Mary said, I live in one -- the White House -- which you may not realize, but is considered -- the White House grounds are a national park site.

This last May, Regan and our friends that we grew up together, that we hike with every year, hiked in Zion. We've hiked in Yellowstone and Glacier and Yosemite and Olympic National Park in Washington and Denali in Alaska. And -- and this is the first time this has actually been announced, this is a press scoop -- Jenna Bush was proposed to in Acadia National Park. (Applause.) So the national parks have been a very important part of our family life, as well.

There's no better way to experience our country, I think, than to visit our national parks, our diverse and huge varied group of national parks that we have, and also it's a great way to introduce young people to being outside.

Just like Mary Bomar said, we worry that young people are spending too much time in front of the computer and the television and the video games when we want all American young people to breathe fresh air, to take advantage of the most magnificent natural landscapes in the world. That's certainly what this one is behind us, and many, many of our parks are.

Our national parks offer children a healthy alternative to being out -- for their free time. The Jefferson Memorial, even in an urban setting, is, of course, also outside, and even children who live in cities have the opportunity to experience many of our urban national parks like Independence Hall in Philadelphia, the Martin Luther King Historic Site in Atlanta, and many others that are in urban areas -- the Missions, for instance, in San Antonio. 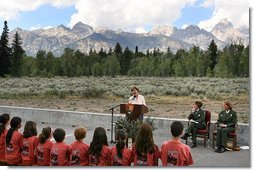 Here in Wyoming, the parks introduce young people both to the natural world, and to their history, the history of their own state. Children can visit Devil's Tower, which is a monolith of igneous rock, and America's first national monument. Children can explore Yellowstone, which is a World Heritage Site; certainly one of the most well known parks in the world, known for its geysers and canyons and fabulous meadows. Children here can go back to the prehistoric era at Fossil Butte National Monument, where the remains of fish and insects, snails, turtles, birds, bats and plants are preserved in 50-million-year-old layers of rock. Young people can discover the stories of their ancestors, the American pioneers, who migrated west along the Oregon Trail at the Fort Laramie National Area.

One of the most fabulous national parks in Wyoming and in the United States is the one we're in right now, the Grand Teton. Home to some of the most awe-inspiring landscapes in the world, this park is known for its magnificent mountain range, its pristine lakes, and its sagebrush-covered valley. Every year, more than 4 million people come to Grand Teton to hike here in this park's mountain trails, to raft the Snake River, to spot the wildlife hiding in the Grand Teton peaks and forests, from the black bear to the red squirrel to the yellow-bellied marmot.

Now we can all learn more about this park at this fabulous new visitors center named for the late Senator Craig Thomas, who was a proud Wyomingite, and a very, very strong advocate in the United States government for our national parks -- also a very close friend of mine and President Bush, and we miss him.

The Craig Thomas Discovery and Visitors Center was made possible by a partnership between the National Park Service, the Grand Teton National Park Foundation, and the Grand Teton Association. This innovative exhibit, which I just got the tour of, especially with the new interactive video displays, will be a really wonderful resource for people who are coming here, both to learn more before they go out into the park, or, in many cases, as we all know, people aren't able to go out into the park, but they can come to the visitors center and learn a lot about it, a lot about all of the -- both the biology and zoology of this park. 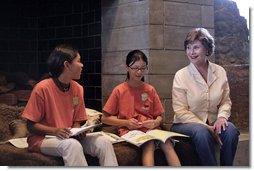 Thanks to this center's really terrific space and architecture and state-of-the-art technology, visitors can now learn everything about the Grand Teton's spectacular resources. Rangers say that just in the couple of weeks that the center has been open, many, many more visitors have come to Grand Teton. They say they haven't actually kept a count, but they can tell by the cars in the parking lot. (Laughter.)

Of course, one of the things that's great about this, about this new center, is that it gives such a good location for the Junior Rangers to do all of their activities. And that's really what we're here today to talk about, and that is these programs that attract young people all over our country; ways we can make sure that all young Americans are educated not only about our national parks and our national historic sites and all of our wonderful resources, but also about their specific responsibility to be stewards of our country and all of the sites and the ways we want them to grow up, the values that we want them to have to grow up and take care of our country when they're the adults in charge.

So I'm so excited to be here with this program. As Mary Bomar said, the Junior Ranger program reaches nearly 400,000 children and their families every year in the United States. We also have an online Web Ranger program. Web Rangers, these are children who can't get into a park but can get into every park on the web and learn about them. The Web Rangers were launched in August 2005, and the site has already had more than 4 million visitors, including from 86 countries around the world.

The best part of the Junior Ranger program, though, is that whole families can come together. It's a wonderful family opportunity to visit our national parks. And certainly for the President and me, our memories, our early memories of visiting national parks included our parents, and now I'm happy to say that our children's early memories -- except for this most recent one of Jenna's -- also included her parents. (Laughter.)

So we're so thrilled to be here with everyone here. I want to thank all of you. I want to thank the big park service. Mary, thank you, the superintendent; all the park rangers here at Grand Teton and at all the other parks here in Wyoming and Idaho. Thank you for everything you do and the way you take care of our pristine beautiful sites, and our country, and all of our visitors. Thank you so much for that. Thank you for dedicating your life to that, to all of the rangers, especially, for that.

And now, I think we're ready for the Junior Ranger swear-in. Are you all ready?