For Immediate Release
Office of the Press Secretary
August 11, 2007

PRESIDENT BUSH: You all having a good time here?

Q Thank you, it's great.

PRESIDENT BUSH: Mark, let me ask you, looking forward to going down to Crawford?

PRESIDENT BUSH: Good, well, that will be Monday. 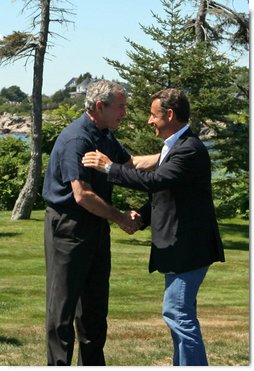 Q Mr. President, what do you expect about France --

PRESIDENT BUSH: I expect to be with a friend. I'm looking forward to having him with my family. The best way we can do things -- best way we send a good signal to President Sarkozy is invite here at the family house. I've got a lot of my brothers around, my sister, my daughters. He's going to figure out what --

MRS. BUSH: Did you see the signs the grandchildren made?

PRESIDENT BUSH: What language are you speaking? (Laughter.)

Q About Mrs. Sarkozy not coming?

PRESIDENT BUSH: Of course we are. She's a very dynamic woman. She is -- we were looking forward to seeing her, as well as the children. And so we're disappointed she's sick, but we understand. That happens sometimes in life.

FORMER PRESIDENT BUSH: Very nice of him to come, having been back to France yesterday --

Q Are you surprised the President of France vacations in America?

PRESIDENT BUSH: We're pleased he's here. Of course he makes the choice he makes. If people were asking me where I think they ought to vacation, it would be right here in America -- where I'll be vacationing, as you know. Monday, starting in Crawford.

Q Could you imagine you, or you, sir, as President, vacationing in a foreign country?

PRESIDENT BUSH: Of course I could.

PRESIDENT BUSH: Yes, there's some spectacular spots around the world that would be --

PRESIDENT BUSH: -- great places to relax. But as you know, Mark, I'm a fellow -- I'm a Texan, I like my place down there. I like to go down there as much as I can. It's where I can relax. It's also -- the job follows you wherever you go, you're always President. And so here we are at my Mother and Dad's house, enjoying a beautiful Maine day, fixing to sit down with the President of France. We're going to have a heart-to-heart talk. We'll be talking about a lot of key issues.

The good thing about President Sarkozy is you know where he stands, he'll tell you exactly what he thinks. And I hope he'd say the same thing about me. 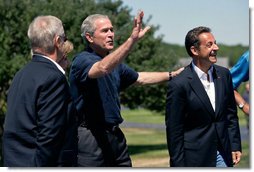 Q Do you think, if he invites you to go to

France for a vacation --

PRESIDENT BUSH: Of course I'd go.

PRESIDENT BUSH: Absolutely. Absolutely. Particularly if he could find a place for me to ride my mountain bike. (Laughter.)

FORMER PRESIDENT BUSH: Plenty of mountains over there.

Q Mr. President, could you say something in French?

PRESIDENT BUSH: No, I can't. I can barely speak English. (Laughter.)

Q Mr. President, what kind of lunch are you going to have?

PRESIDENT BUSH: We're going to give him a hamburger or hot dog, his choice. (Laughter.)

PRESIDENT BUSH: Corn on the cob, real fresh this time of year.

PRESIDENT BUSH: If he feels like it, he can have him a piece of blueberry pie -- fresh blueberries up here in Maine.

Q Are you going to go fishing?

FORMER PRESIDENT BUSH: We went this morning to check, there's no fish --

PRESIDENT BUSH: We may go boating. That's the difference between fishing. I need to spend a little time with him alone. We'll figure out the schedule here in a minute. I've got -- we've probably got 45 minutes of private time that we've got to sit down and talk about some of the key issues of the world. This is a complicated world with a lot of opportunities to bring peace, and no question, when America and France work together we can get a lot of important things done.

Q What's the main issue you want to address with him?

PRESIDENT BUSH: Sure, absolutely we'll talk about Iran. But, yes, I had a very good visit with the President in Germany and I was very impressed -- impressed with his vision, impressed with his leadership skills. Appreciated very much the involvement of the French government in helping get the nurses out of Libya, and I think we can work well together. And that's going to be good for the people of France and the people of the United States, and it's going to be good to help in the spread of peace. 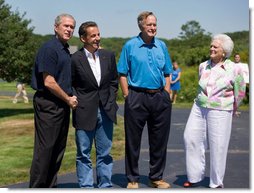 Q Do you see it as a time to start new relations with France, Mr. President?

PRESIDENT BUSH: Thank you. I respect the French people, I respect the history of France. We have had disagreements -- on Iraq, in particular -- but I've never allowed disagreements to not find other ways to work together. The previous administration and my administration worked very closely on Lebanon, and I'm looking forward to building on the progress -- here comes the President.

Thank you for the press conference. Talk it up. Talk it up as a guy who's trying to reach out and be friendly to the Fourth Estate -- that would be the press.

PRESIDENT BUSH: Do you want to say a few comments?

They just asked me about your wife and I said how disappointed we were, but we fully understand.

Do you want to ask him a couple of questions? He's never shy around the press.

PRESIDENT SARKOZY: (As translated.) I came to visit the United States on holiday, on vacation, like 900,000 French do every year. It's a great country. I'm very happy to be here. The United States is a close friend of France, and I'm very glad to be able to meet with the President of the United States here today.

Q A new page in the history of the two countries?

PRESIDENT SARKOZY: I just finished reading a biography of Lafayette, and I wanted to tell President Bush about that. The U.S. and France have been allies and friends for 250 years. At the birth of the United States, France chose the side of the U.S. -- there were 4 million Americans at that time, and France was the friend of the Americans. Afterwards we, the French, were involved in the war -- the West were on our side. And on the East Coast, we see a lot of cemeteries with small white crosses -- on the French coast -- and those are young Americans who came to die for us. And that is a lot more important than Mr. Sarkozy or Mr. Bush, because after Mr. Bush, after Mr. Sarkozy, we'll continue to be friends of the Americans.

The U.S. is a large, big democracy. It's a country of freedom and it's a country that we've always admired because it's the county that brought a constitution and freedom to the world. And France is friends with democracies, not with dictatorships.

PRESIDENT SARKOZY: -- I went back to France, yes, for the Cardinal's funeral. I know that -- therefore, I know very well that the distance between the U.S. and France is relatively small. (Laughter.) And as I came back I realized that my wife and two of my children had a sore throat. And George will say that I brought it -- (laughter.)

PRESIDENT BUSH: Thank you all. Thank you.