For Immediate Release
Office of the First Lady
August 7, 2007


This morning, Mrs. Laura Bush called Barbara Morgan, an astronaut and former teacher who will travel to space for the first time on the flight of the Space Shuttle Endeavour to the International Space Station.

Mrs. Bush expressed congratulations from one schoolteacher to another and noted that she and the President appreciate Ms. Morgan's commitment to America's space program, to teaching, and to students. Mrs. Bush concluded the call noting that Americans-and lots of excited teachers and students-will be watching the mission with a lot of pride. 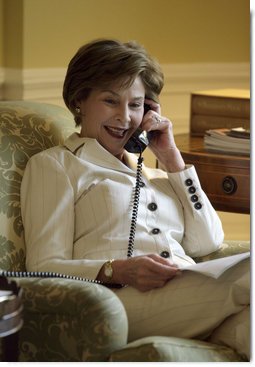 Ms. Morgan served as the "Teacher in Space" alternate to Christa McAuliffe for the 1986 Space Shuttle Challenger mission. Following the Challenger tragedy, Morgan continued her ties with NASA and eventually left her job as an elementary school teacher in Idaho to become a full-time astronaut in 1998.

The Space Shuttle Endeavour is scheduled to launch August 8, 2007.