For Immediate Release
Office of the Press Secretary
August 4, 2007

THE PRESIDENT: On behalf of the citizens of America, I bring prayers from the American people to those who suffered loss of life as a result of the collapse of the 35W bridge here in the Twin Cities. I bring the prayers of those who wonder about whether they'll ever see a loved one again. 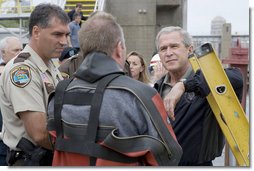 First, I want to thank the Governor and the Mayor and the senators, members of the Congress for working in a coordinated way to respond to this tragedy. I have met with the Chief of Police and the Sheriff, rescue workers, people who represent men and women who are working as hard as they possibly can to save life and to find life; to go under these murky waters to find the facts.

We have an amazing country, where people's instinct, first instinct, is to help save life. There's a lot of peoples' first instincts here in the Twin Cities was to save the lives of somebody who was hurting. And I know the people of this community thank their fellow citizens who did that.

I'm here with the Secretary of Transportation, because our message to the Twin Cities is, we want to get this bridge rebuilt as quick as possible; that we understand this is a main artery of life here; that people count on this bridge and this highway system to get to work. There's a lot of paperwork involved with government. One of our jobs is to work with the Governor and the Mayor and the senators and the members of the Congress to cut through that paperwork, and to see if we can't get this bridge rebuilt in a way that not only expedites the flow of traffic, but in a way that can stand the test of time.

I make no promises on the timetable. I do promise that Mary Peters, the Secretary of Transportation, is going to be in charge of this project. I do promise she's going to listen to the local authorities to find out what the folks here need. I do promise that when she sees roadblocks and hurdles in the way of getting the job done, she'll do everything she can to eliminate them.

So I'm proud to be with you. Thank you for your leadership. God bless the people of this part of the world. Thank you.