For Immediate Release
Office of the Vice President
August 2, 2007

I first met Guy Vander Jagt more than 30 years ago, by introduction of my boss, President Gerald Ford. The President had the highest opinion of Guy. They both came from western Michigan; they had served adjoining congressional districts; and they were friends for life. 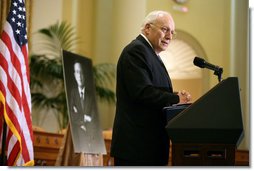 Guy was here in the Capitol, along with many of us, the night we said goodbye to President Ford. Now, only seven months later, we gather again to pay tribute to another fine son of Michigan who loved his country, who served with distinction, and will always be remembered with fondness and respect.

Guy arrived in the House of Representatives four decades ago, as a member of the class of 1966. That group, as time would show, was destined for high achievement, and included names like Bill Steiger, Sonny Montgomery, Bob Taft, Jim McClure, George Bush. The Michigan delegation was impressive in itself, with Ford and Vander Jagt, Phil Ruppe, John Dingell, Bill Broomfield, Martha Griffiths -- and other great talents in both parties.

From the first days of the 90th Congress to the last days of the 102nd, Guy Vander Jagt was a standout member of this House. By the time I arrived as a freshman in the 96th, he was already something of a legend among his colleagues. Everyone knew what a remarkable speech Guy could give, on just about any topic, whenever the need arose. (Laughter.) When he stepped to the well, Democrats and Republicans alike wanted to stop to pay attention. It didn't matter whether colleagues agreed or disagreed with him; they simply knew that if Guy had something to say, it was worth listening to.

At the convention that first nominated Ronald Reagan and George Bush as President and Vice President, Guy was chosen to give the keynote. Reagan himself explained the choice this way: "My desire was simple. I wanted the best -- Guy Vander Jagt."

It was said that Guy's great skill was in "painting the broad picture in bright colors and vivid contrasts." And there were those who wondered how someone with an oratorical style could succeed in a conversational age. It didn't take long to figure out Guy's secret. The man had substance. He spoke without notes -- expansively and often poetically. But the words penetrated because they were honest, insightful, and true -- always to the point, always from the heart. Guy was a highly intelligent man with a well stocked mind. Yet more than that, he had direction. His purposes were noble; his motivations were patriotic; he was morally serious.

Guy also possessed the gift of boundless energy, and none of it was wasted. If ever a man could "fill the unforgiving minute with sixty seconds worth of distance run," it was him. For an entire generation of incoming House Republicans, one of the first sitting members they met was Guy Vander Jagt. In many cases, Guy was the one who'd recruited them to run. Others met him at candidate school. And hundreds would host Guy in their districts -- because if there was a seat to be won, our tireless NRCC chairman was always willing to go out and put his shoulder to the wheel. His aide, Steve Lotterer, said that Guy went to all 50 states, and "He would tell candidates, 'I am here to build you up, and to talk about how good you will be, not to tear down your opponent.'"

If you think back to the days when Guy first took over as chairman -- when the House had literally twice as many Democrats as Republicans -- you simply have to marvel at his drive and his optimism. He gave years of labor and travel to the cause -- making many friends and pleasing many large audiences, but also enduring the tiny airplanes, long car rides, late nights, and small crowds. He took the good with the bad, but all of his own contributions were good -- and they laid the groundwork, eventually, for an historic political turnaround. We admired Guy for all of this -- and we admire Carol, too, because she worked just as hard as her husband did and they both made many sacrifices for all of us.

Guy was a happy warrior for his principles and for his party. But he was comfortable on the other side of the aisle and he had friends of every stripe. As Chairman Rangel said on the House floor, Guy had "the compassion and sensitivity and understanding that it takes to make this Congress and this country work." He cared about everybody in the House.

I'd wager that each of his colleagues, and each person in this room today, can recall a time when Guy did something especially generous or considerate just for us. For my part, there are many. But in particular I think of one Sunday in the 1980s, when Guy and our wives found ourselves on the Eastern Shore of Maryland -- and at Guy's invitation, we together spent an unforgettable afternoon with the novelist James A. Michener. It was so very much like Guy and Carol to want to share that experience with friends. And we're still grateful for that memory. And I still see Guy Vander Jagt as he was on that day and every day I knew him -- warm and thoughtful, wise and literate. More than an able colleague; more than a talented legislator; more than a skilled political hand -- Guy Vander Jagt was good company, a good example, and a very, very good man.

Joined here today, we again feel the loss that came to the country, and to all of us, on the 22nd of June. But we're grateful, too, that we knew a man of such great style and substance. We're proud of our friend, Guy Adrian Vander Jagt. And the United States of America honors his memory. (Applause.)