For Immediate Release
Office of the Press Secretary
August 2, 2007

THE PRESIDENT: Good morning. I just finished a Cabinet meeting. One of the things we discussed was the terrible situation there in Minneapolis. We talked about the fact that the bridge collapsed, and that we in the federal government must respond and respond robustly to help the people there not only recover, but to make sure that lifeline of activity, that bridge, gets rebuilt as quickly as possible. 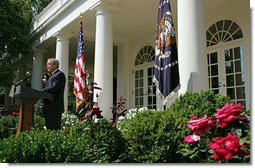 To that end, Secretary Peters is in Minneapolis, as well as Federal Highway Administrator Capka. I spoke to Governor Pawlenty and Mayor Rybak this morning. I told them that the Secretary would be there. I told them we would help with rescue efforts, but I also told them how much we are in prayer for those who suffered. And I thank my fellow citizens for holding up those who are suffering right now in prayer.

We also talked about -- in the Cabinet meeting talked about the status of important pieces of legislation before the Congress. We spent a fair amount of time talking about the fact that how disappointed we are that Congress hasn't sent any spending bills to my desk. By the end of this week, members are going to be leaving for their month-long August recess. And by the time they will return, there will be less than a month before the end of the fiscal year on September the 30th, and yet they haven't passed one of the 12 spending bills that they're required to pass. If Congress doesn't pass the spending bills by the end of the fiscal year, Cabinet Secretaries report that their departments may be unable to move forward with urgent priorities for our country.

This doesn't have to be this way. The Democrats won last year's election fair and square, and now they control the calendar for bringing up bills in Congress. They need to pass each of these spending bills individually, on time, and in a fiscally responsible way.

The budget I've sent to Congress fully funds America's priorities. It increases discretionary spending by 6.9 percent. My Cabinet Secretaries assure me that this is adequate to meet the needs of our nation.

Unfortunately, Democratic leaders in Congress want to spend far more. Their budget calls for nearly $22 billion more in discretionary spending next year alone. These leaders have tried to downplay that figure. Yesterday one called this increase -- and I quote -- "a very small difference" from what I proposed. Only in Washington can $22 billion be called a very small difference. And that difference will keep getting bigger. Over the next five years it will total nearly $205 billion in additional discretionary spending. That $205 billion averages out to about $112 million per day, $4.7 million per hour, $78,000 per minute.

Put another way, that's about $1,300 in higher spending every second of every minute of every hour of every day of every year for the next five years. That's a lot of money -- even for career politicians in Washington. In fact, at that pace, Democrats in Congress would have spent an extra $300,000 since I began these remarks.

There's only one way to pay for all this new federal spending without running up the deficit, and that is to raise your taxes. A massive tax hike is the last thing the American people need. The plan I put forward would keep your taxes low and balance the budget within five years, and that is the right path for our country.

I want to thank OMB Director Rob Portman for his hard work in developing this plan. This was Rob's last Cabinet meeting. Laura and I wish him and his family well. And I call on the Senate to confirm his successor, Jim Nussle, so we can work together to keep our government running, to keep our economy growing, and to keep our nation strong.