For Immediate Release
Office of the Vice President
July 27, 2007

THE VICE PRESIDENT: Thank you very much. Secretary Gates, Secretary Rumsfeld, General Pace, distinguished guests, fellow citizens: It's a privilege to join all of you in this tribute to Edmund Peter Giambastiani, Jr. -- a fine American who President Bush, and all of us, know as Admiral G. 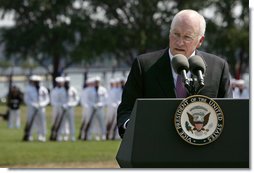 I want to thank my good friend General Peter Pace for the invitation to be here today, and for his own superb service as Vice Chairman and Chairman of the Joint Chiefs of Staff.

Of those in the military or public service today, it will be said that we served during one of the most eventful periods in American history. It will be said, as well, that the years of General Pace and Admiral G were years of extraordinary leadership and accomplishment. These two officers, with combined service of more than seven decades, have been a remarkable team for the United States of America. They've earned the deepest respect of the President and Vice President, and the gratitude of our entire nation.

Active duty places many demands on military families, who so often and so freely put the interests of the nation above their own. Thus as we honor the seventh Vice Chairman of the Joint Chiefs of Staff, we also honor his wife, Cindy, and their entire family for their selfless devotion to our country.

It's most fitting that we should gather at the Naval Academy this morning. It's here that Ed Giambastiani, and his son Pete, and his late brother Chick, all became officers in the United States Navy. Ed was a member of the class of 1970. So he was here when Admiral Jack McCain spoke to the class and said that while some proclaimed "make love, not war," Naval officers were man enough to do both. (Laughter.)

I'm proud to say that I've known and respected Admiral Giambastiani for more than two decades. When our paths first crossed, I was a member of the House of Representatives serving on the House Intelligence Committee, and Ed was the commander of a vessel carrying out very sensitive missions for the country, as submariners often do. That day and ever after, I've known him to be a man of ability; a man of discernment; and a man of character.

He's someone you can count on -- and the nation has counted on him time and time again to accept the most demanding assignments. In his career he has commanded a nuclear-powered deep research sub, commanded a fast attack sub, commanded a submarine development squadron, and commanded the Atlantic submarine fleet. In every station he excelled, bringing competence, reliability, courage -- and something more. Ed Giambastiani stands out as a visionary, and a strategic thinker of the first order. He understands profoundly that a massive organization tends to move slowly, and turns in a wide arc, much like an aircraft carrier. Therefore, in defense of this nation's long-term security, we need to think about tomorrow's challenges today. And we must prepare to meet those challenges systematically and decisively.

In Ed's words, "big organizations need to have a group of smart people who wake up every day thinking about how to innovate." And he has helped build that very kind of culture in the United States military. He led the work of transformation during his time as Commander of the U.S. Joint Forces Command, and as the first Supreme Allied Commander for Transformation. As Vice Chairman, he led the Joint Requirements Oversight Council -- making the decisions that design the armed forces of the future.

He will always be remembered as one of the military leaders who brought us into the 21st century -- with a clear understanding of this technological age, and an absolute determination to preserve America's competitive advantage in warfare. Years into the future, our military will be better, and our nation will be safer, thanks to the skill and foresight of this Navy admiral.

One of his many admirers has said this about Admiral G: "[He] reminds me of the submarines he has commanded -- running silent and running deep." This is a man who gets to where he's going by virtue of perseverance and clear, focused thinking. He has said that the "most rewarding part" of his career is working with younger members of the armed forces. And I know that so many of those younger members, with years of service still ahead of them, will always measure themselves by the standard of Admiral G: honest in every circumstance, careful in judgment, generous in sharing credit for a job well done.

Most of all, those of us gathered here today admire this man for his dedication to the United States of America and to the cause of freedom. He has spoken with feeling about the struggle our nation faces today, and about the merciless tactics of our enemies. Admiral G has stated it well: Our cause is to "defend our way of life and to promote human ideals in the face of extremists that offer no hope, no program for the future and no basis for democratic dialogue."

Admiral Giambastiani has devoted every hour of his career to protecting the liberty and the lives of the American people. And in this time of transition, every member of our military can be certain that America will stay on the offensive in the war on terror. The work goes on, and it doesn't get any easier. But our mission in this war is right, and our cause in this world is just. We fight to remove deadly threats, and to defend freedom against those who would destroy it. The United States has chosen an honorable course. The United States has given its word. And we will see this cause through to victory. (Applause.)

When Ed was a boy in rural New York State, his history teacher saw something special in him: this was obviously a young man with the "willpower and the determination to succeed." He has, of course, met and exceeded those early expectations. I know that his mother, Adele, and his father, Edmund, Sr., would be most proud of their son who has carried the family name into American history, and who retires now with four stars on his shoulder.

On the 3rd of June, 1970, Edmund Giambastiani, Jr. became an officer -- raising his right hand and swearing to defend the Constitution of the United States against all enemies, foreign and domestic. He has been faithful to that oath, and he has earned the satisfaction of this moment. We honor this leader of distinction for his 37 years of commissioned service; for his lifetime of achievement; and for the sterling example he leaves to us all. Admiral G, you are a great man. On behalf of the President of the United States and the American people, I commend you and thank you for your service. (Applause.)