For Immediate Release
Office of the Press Secretary
July 26, 2007

MRS. BUSH: Welcome, everyone, to the White House. Thank you for coming to celebrate the 2007 Special Olympics Games.

The Special Olympics have been a joyful part of international athletics since 1968, when the first games were held at Chicago's Soldier Field. Started by activist, Eunice Shriver, the games reflect her belief that young people with intellectual disabilities deserve the same opportunities as young people everywhere. Mrs. Shriver knows that young people everywhere share the same satisfaction for a contest won, experience the same growth from persistence and hard work, and cherish the same friendships with coaches and teammates. Thank you, Mrs. Shriver. (Applause.) 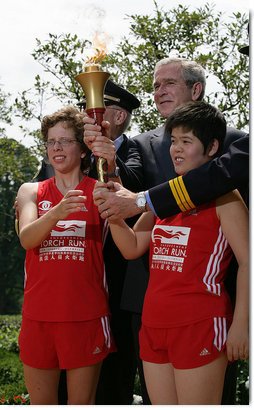 Those first games in Chicago drew a thousand athletes from 26 United States states and Canada. Today, the Special Olympics has grown into a global movement of 2.5 million athletes, representing 165 nations. As they compete, Special Olympians build discipline, enthusiasm and self-confidence. Parents, neighbors, teachers and friends follow their achievements, while Olympians' countries look on with pride.

This year about 7,500 Special Olympians will gather for the summer games in Shanghai. Leading up to the games, people from around the world are joining in a tradition that dates back to ancient Athens, the kindling of the Olympian flame. The flame has been a symbol of the Special Olympics since 1981, when a Kansas Police Chief, Richard LaMunyon established the Law Enforcement Torch Run, to raise money and public awareness. Last year, on the torch run's 25th anniversary, more than 85,000 law enforcement officials in 35 countries carried the "flame of hope". Their efforts raised more than $25 million to support Special Olympians around the world.

This year marks the first ever global torch run. Starting in Athens and stopping in 10 international cities, the flame will make its way to Shanghai, held aloft by many dedicated and physically fit law enforcement officers. Some of them are here with us today. The torch run reflects the work these officers do every day. Our law enforcement officers protect the rights and dignity of each person, and they make our communities welcoming places, where everyone can make the most of his or her talents.

This is the spirit of the Special Olympics. Today we're thrilled to support our athletes as they enter their final phases of training before the games. This fall we'll cheer as Team USA represents our country's optimism and diversity abroad. And we offer gratitude to all the compassionate law enforcement officers who will carry the "flame of hope."

Now I'd like to introduce a man of great compassion, who while perhaps not an Olympic athlete -- (laughter) -- is at least a big sports fan. (Laughter.) Ladies and gentlemen, my husband, President George W. Bush. (Applause.)

THE PRESIDENT: Thank you all. Welcome to the Rose Garden. Thanks for that touching introduction, Laura. (Laughter.) I am proud to salute an outstanding group of athletes, the men and women of Team USA. (Applause.) And I'm pleased to announce today that Secretary of Education, Margaret Spellings, who is with us today, will lead the impressive delegation to the World Games in Shanghai. Thank you, Madam Secretary. (Applause.) Appreciate your service.

I'd also like to extend our greetings to the representatives from Team China. You're welcome here in the Rose Garden, and I appreciate you bringing this warm weather with you. (Applause.) I thank Secretary Mike Leavitt for joining us. Michael, it's good to see you. Thanks for being here. We are really proud that Eunice Kennedy Shriver, the founder of the Special Olympics, took time to be here in the Rose Garden. Welcome back to the White House. Great to see you. (Applause.) And I'm glad you brought your boy with you -- (laughter) -- the Chairman of the Special Olympics, Tim Shriver. Thanks for being here, Tim. (Applause.) These are good people.

I'm proud to be here, as well, with Liu Peng -- he's the Chinese Minister of Sports -- and other members of the Chinese delegation. We welcome you here. Thank you for coming, Mr. Minister. (Applause.) And I appreciate very much your bringing President Hu's letter on the 2007 Special Olympics World Summer Games in Shanghai. It's very kind for you to have brought his letter to me. I'm glad to have received it.

I want to thank Hans Hickler, the CEO of DHL, who has joined us. I thank Chief LaMunyon, who Laura just talked about. He's the founder of the Law Enforcement Torch Run, and he's here with his wife, Sharron. Chief, appreciate you coming. Thanks for being a visionary. Glad you brought Sharron.

I thank the Special Olympic athletes, the final leg runners, and the law enforcement officials that have joined us today. Proud of your service and proud of your compassion. (Applause.)

I remember when I was the governor of the great state of Texas being a hugger. That was during the Special Olympic games. If you've never been a hugger, I strongly advise you to be one. (Laughter.) That means you stand at the end of the finish line of a race and you hug the people coming across the line. It meant a lot to me to be a hugger. It introduced me to the Special Olympics and I have been a big backer of the Special Olympics -- primarily because then and since then I have been inspired by the determination and the courage of our athletes. (Applause.)

And so we welcome you, and we welcome your families, and we welcome your coaches and your supporters. And to the family members and coaches and supporters, I thank you for helping our fellow citizens understand that the promise of this country belongs to every citizen. Over four decades, the Special Olympics has changed the lives of millions of people across the world. And we're proud to note that this noble mission began right here in America. And let me just say, I believe it is a fitting testimony to this country, that was based upon ideals of inclusion and acceptance and hope, that the games we honor today began right here in our country.

And ours is a country that constantly needs to strive to realize that vision. Interestingly enough, it was 17 years ago today that the Americans With Disabilities Act was signed into law at the White House. I know some folks here witnessed that signature. And I know a man who played a major role in getting that done, and that was the 41st President -- you call him President, I call him Dad. I am proud it was my dad that signed that law into being. I firmly believe millions of disabled Americans have found more opportunities to work and to contribute to our society because of that law.

There's more work to be done, and that's why my administration is building on progress through what we have called the New Freedom Initiative. It's a good initiative and it's an important initiative, and it's an initiative that will help all Americans realize the great blessings of this country.

That's why the message of Special Olympics is important. That's why millions have joined this cause, Eunice. It started off as an idea, and now it's a worldwide movement. And that's why we look proudly upon the "flame of hope," which symbolizes the dreams of millions.

One of the athletes who is going to carry the torch today is Karen Dickerson. Karen is a tireless advocate for her fellow athletes. She's what we call a fierce competitor. In the 2003 World Games in Ireland, Karen was told that she had a stress fracture in her leg. Yet, through sheer willpower, she won the Bronze Medal. (Applause.) She has since run two Marine Corps Marathons. In the Boston Marathon this April, she finished in the top 10 percent of all women. (Applause.)

I want to thank you for being here. Karen should serve as an inspiration for a lot of folks in our country. You're a true champ, just like every other Special Olympian that has joined us today, and the millions who will be in Shanghai later on. Your success is best measured not by the medals you win, but the kind of courage you show. You follow your dreams, you never gave up, and you've shown us what the Olympic spirit is all about.

And so we send you to the World Games with our love and our prayers. We ask that you carry the greetings of the American people with you when you go to Shanghai, and our wish for a world -- and that you remind the people that our wish for our world is a more welcoming, more hopeful and more peaceful place.

God bless you all, and good luck. (Applause.)