For Immediate Release
Office of the Press Secretary
July 20, 2007

THE PRESIDENT: Good morning. Thank you all for coming. I'm joined by veterans and military families who are here to express support for our troops and their mission in Iraq, and I want to thank you all for being here today.

We've just finished a really good meeting. In our discussions, these folks had a message that all of us in Washington need to hear: It is time to rise above partisanship, stand behind our troops in the field, and give them everything they need to succeed. 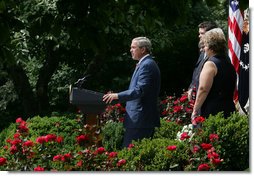 In February, I submitted to Congress a Defense Department spending bill for the upcoming fiscal year that will provide funds to upgrade our equipment for our troops in Iraq and provides a pay raise for our military -- it's a comprehensive spending request that Congress has failed to act on. Instead, the Democratic leaders chose to have a political debate on a precipitous withdrawal of our troops from Iraq. The House and Senate are now scheduled to leave for their August recess before passing a bill to support our troops and their missions. Even members of Congress who no longer support our effort in Iraq should at least be able to provide an increase in pay for our troops fighting there.

When Congress returns after Labor Day, there will be less than one month before the fiscal year ends and current funds for Defense Department operations run out. Congress still has an opportunity to do right by our men and women in uniform -- and our national security. So today I call on Congress to take action and get this vital piece of legislation to me to sign -- on budget and on time.

I also ask Congress to give our troops time to carry out our new strategy in Iraq. Like all wars, the fight in Iraq has had frustrating setbacks. It has also had important successes. We've seen dramatic turnarounds in places such as Anbar province, which was once thought lost to the enemy. Just this week, our military forces announced the capture of one of al Qaeda's top Iraqi leaders. He helped to form what al Qaeda calls the Islamic State in Iraq, in an attempt to replicate what the Taliban had created in Afghanistan. Today that leader is under arrest, and his followers are under siege.

These successes demonstrate the gains our troops are making in Iraq, and the importance of giving our military the time they need to give their new strategy a chance to work.

Earlier this year, the Senate seemed to share that view. They confirmed General David Petraeus as commander of our forces without a single dissenting vote. And now, barely a month after his strategy became fully operational, many of those same senators are saying that that strategy has failed. 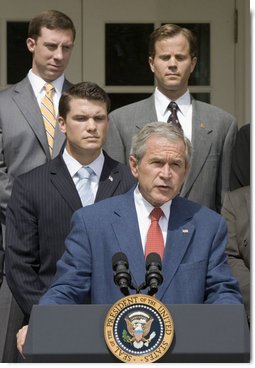 Our nation deserves a serious debate about Iraq, because the outcome of this conflict will have enormous consequences for our country. Failure in Iraq would allow terrorists to operate from a safe haven with access to the world's third largest oil reserves. Failure in Iraq would increase the probability that at some later date, American troops would have to return to Iraq to confront an enemy more dangerous and more entrenched. Failure in Iraq would send an unmistakable signal to America's enemies that our country can be bullied into retreat.

America's involvement in Iraq does not have to end this way. A free and stable Iraq is still in reach. It has the potential to transform the Middle East and bring us closer to the day when radical regimes are replaced by peaceful allies, when terrorists have fewer places to train and operate, and when moms and dads in the Arab world see a future of hope for their children.

One of the folks with us today is an Air Force Reservist named Eric Egland. Here's what he said, he said, "We live in the world's oldest democracy and have been blessed with the strength to protect our freedoms and to help others who seek the same."

This has always been America's mission, and today that mission is being carried out by brave men and women who have stepped forward to keep our country secure. I thank them and I thank their families for the sacrifices they're making. And I thank you all for supporting them. 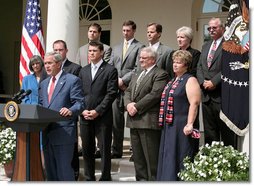