For Immediate Release
Office of the First Lady
July 18, 2007

MRS. BUSH: Welcome, everyone. Welcome to the White House. Congratulations to the finalists and recipients of the 2007 National Design Awards.

The White House is a perfect place to honor outstanding design. The iconic architecture of this building was actually the result of a design competition. Responding to an advertised prize of $500, architects from our new nation submitted their proposals for "The President's House." You might call that contest the first "National Design Award." (Laughter.) 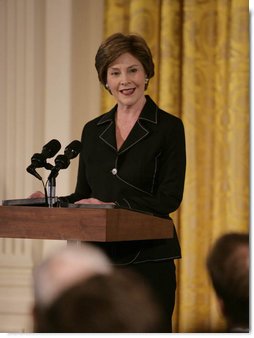 You may know that the winner of the competition was the Irish-American architect named James Hoban. And you may not know that his plan had some early, and prominent, detractors. When Thomas Jefferson was elected President, he invited architect Benjamin Henry Latrobe to oversee the construction of the President's House. It turns out Latrobe had some "aesthetic differences" with his client -- I'm sure none of you have ever had that. (Laughter.)

Despite Latrobe's initial disapproval, James Hoban's early sketches have become a recognized and beloved symbol of democracy. Design, however, is about much more than symbolism or aesthetics. Coco Chanel once said, "Fashion is not something that exists in dresses only. Fashion has to do with ideas, and the way we live."

Your creations remind us of design's ability to influence the way we live. The work we're recognizing today has turned concrete and landfills into parks and gardens. Your designs have brightened the libraries and play yards of primary schools in New York, and upgraded the athletic center of a high school in Mexico. Your firms have designed a library in Rhode Island, a science center in Arizona, and a college dormitory in Ohio.

Your union of form and function has changed the way we peel potatoes, write our names, and brush our teeth. Your designs have made it more fun to go back in time by playing Oldies on our iPods -- and then to really go back in time by doctoring our old personal photos with Photoshop. (Laughter.)

As the 2007 National Design Awardees remind us, the reach of designers' innovation knows no limits. Increasingly, designers are showing their innovation in the fields of sustainable design. You're working on projects that are friendly to the environment, and that can help address global challenges like poverty and pandemic disease. 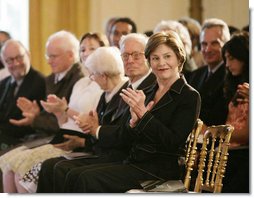 I recently visited the Cooper-Hewitt's new exhibit, "Design for the Other 90 %." This exhibit showcases design concepts that benefit more than 5 billion people around the world who are not traditionally served by professional designers. These works provide shelter, health, sanitation, energy and transportation and education. They can improve the quality of life for people living in poverty. And they can help whole communities recover from natural disasters.

One challenge being addressed by these designs is the lack of clean water. Around the world, more than a billion people do not have safe water to drink. A child dies every 15 seconds from illnesses related to unsafe water. Designs like the LifeStraw -- a personal, mobile water purifier -- help protect against the water-borne diseases of typhoid, cholera, and dysentery. And products like the Q Drum -- a durable plastic container that rolls easily when filled with water -- eases the burden of fetching clean water in remote areas.

I've seen first-hand the difference sustainable designs can make. Last month, at a school in Zambia, I helped inaugurate the first U.S. government-supported PlayPump. PlayPumps are children's merry-go-rounds that are attached to a water pump and a water storage tank. When the merry-go-round turns, clean water is produced. PlayPumps are fueled by a limitless supply of energy: children at play. (Laughter.)

I've also seen how socially responsible designs can improve lives here in the United States. Many of the projects highlighted in "Designs for the Other 90 %" help people on our own Gulf Coast who are recovering from the devastating 2005 hurricanes. The Seventh Ward Shade Pavilion is restoring a sense of community to New Orleans neighborhoods. Projects like YouOrleans and Katrina Furniture Project turn recycled debris into tables, stools, and church pews.

This February, in Mississippi, I visited the Katrina Cottages. These affordable single-family homes are an attractive alternative to FEMA trailers. The cottages are engineered to withstand hurricane-force winds, while respecting the Gulf Coast's architectural traditions. The designer of Katrina Cottages, Marianne Cusato, received the Cooper-Hewitt People's Design Award in October, and Marianne is with us. (Applause.)

From communities here in the United States, to rural areas in Africa, product designers, architects, landscape designers, and urban planners can improve millions of lives with their work. And here's my yearly charge: Don't forget schools. Pay attention to school architecture and to school landscape design, to creating sustainable schools, and to the restoration of our historic old school buildings.

Thank you for your contributions to design, and for using your creativity to make life better for us all. And congratulations to each and every one of the award winners.

Now, to say more about each of our National Design award winners, I'd like to introduce the director of the Cooper-Hewitt National Design Museum, Paul Thompson. (Applause.)