For Immediate Release
Office of the Press Secretary
July 17, 2007

PRESIDENT BUSH: Mr. Secretary General, welcome; thanks for coming. We've just had a wide-ranging and full discussion on a lot of issues. First, Mr. Secretary General, I appreciate you, one, taking on this job; two, working extremely hard; and, three, doing a fine job. I admire the values you hold dear to your heart and I appreciate the chance to share some thoughts with you. 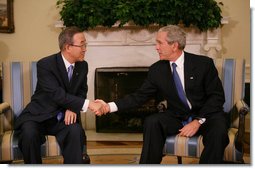 And one of the things I briefed the Secretary on was my views about extremism and these radicals that will do anything to disrupt the goals set by the United Nations and/or disrupt the advance of democracy in peaceful societies. Al Qaeda is strong today, but they're not nearly as strong as they were prior to September the 11th, 2001, and the reason why is, is because we've been working with the world to keep the pressure on, to stay on the offense, to bring them to justice so they won't hurt us again; to defeat them where we find them.

And now we find them in Iraq. These killers in Iraq, people who will kill innocent life to stop the advent of democracy, people who are trying to get on our TV screens on a daily basis to drive us have got ambitions and plans. These people have sworn allegiance to the very same man who ordered the attack on September the 11th, 2001, Osama bin Laden. And they want us to leave parts of the world, like Iraq, so they can establish a safe haven from which to spread their poisonous ideology. And we are steadfast in our determination to not only protect the American people, but to protect these young democracies. And I appreciate your interest in the subject.

Al Qaeda would have been a heck of a lot stronger today had we not stayed on the offense. And it's in the interest of the United States to not only defeat them overseas so we don't have to face them here, but also to spread an ideology that will defeat their ideology every time -- and that's the ideology based upon liberty.

So Mr. Secretary General, I'm proud to have you here and thank you for your leadership.

SECRETARY GENERAL BAN KI-MOON: Thank you very much, Mr. President. This is my second time for meeting with you in this Oval Office. I appreciate your strong support and active participation of the United States in the United Nations. And I'm very much grateful for all the strong support for peacekeeping operations.

In addition to what President Bush has just mentioned on the issues we have covered, I'd like to mention just a few important, from my perspective.

First of all, I welcome the interest which you have announced yesterday for the comprehensive Middle East peace process. As a member of the Quartet, I am prepared to work very closely to see expedited peace process in the Middle East. 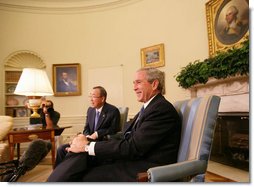 As for Iraqi situation, this is a problem of the whole world. And as far as the United Nations is concerned, we are prepared to contribute to Iraqi government and people to help them overcome this difficulty, in close coordination with the MNF and including the United States. We are going to help their political facilitation, as well as economic and social reconstruction. And we also are going to continue the international compact process for Iraq, as well as expanded -- foreign ministers meeting. This will provide good opportunity for Iraqi people and international community to work together for peace and security in Iraq.

In Darfur situation we have made considerable progress. And we are going to step up the political process. We have made a positive development yesterday in Tripoli through the meeting chaired by United Nations and African Union. We are going to have negotiation, pre-negotiation in Arusha, Tanzania in early August. We are also going to facilitate humanitarian assistance. I'm going to step up efforts to deploy hybrid operations as soon as possible in Darfur to resolve this issue as soon as possible. In that regard, I appreciate U.S. government strong support in this matter.

On climate change, which is very important issue for all humankind, I appreciate President Bush's initiative during Heiligendamm G8 summit meeting. I extended an official invitation to President Bush today to attend, to participate in a high-level U.N. debate on climate change, which will be held on September 24th. Your participation will be very much appreciated and I'm looking forward to welcoming you to New York.

Lastly, on North Korean nuclear issue, I appreciate the U.S. government initiative and flexibility in promoting development of these issues. I'm encouraged and I welcome the recent development of situation. I hope that the parties concerned, including DPRK, will take necessary measures to implement this joint statement to realize the denuclearization of the Korean Peninsula as soon as possible.

Thank you very much for your hospitality.

PRESIDENT BUSH: Thank you, sir. Thank you all. 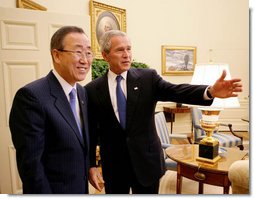