For Immediate Release
Office of the Press Secretary
July 15, 2007

Tee Ball on the South Lawn

THE PRESIDENT: Ladies and gentlemen, welcome here to tee ball on the South Lawn of the White House. I'm honored to be joined here with the commissioner for today's game, member of the Hall of Fame, the great Frank Robinson. (Applause.) Thanks for being here. 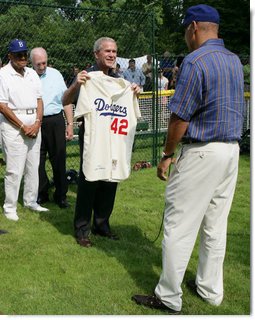 THE PRESIDENT: Mario, thanks, great job on the anthem. I thank the Color Guard, as well, for being here. Today we're going to have an outstanding contest. Laura and I are proud to be able to watch. From Los Angeles, California, the Little League Dodgers. (Applause.) And from Brooklyn, New York, the Little League Highlanders. (Applause.) And we want to welcome the players. We particularly thank the coaches for working with the youngsters. Thanks for getting them interested in baseball, America's greatest sport. We want to thank the parents who have come. Thank you for supporting the kids. (Applause.) And we're looking forward to a good game.

Today -- every day is a special day when we play baseball at the White House, but today is particularly special since we're going to pay homage to Jackie Robinson. Jackie Robinson, as you know, broke the color barrier in baseball, but there were some pioneers ahead of Jackie. And today we're proud to welcome the Negro League players who are here. Thank you all for coming. (Applause.)

Imagine what baseball would have been like had you been a part of the Major Leagues. Jackie Robinson was a pioneer, and Frank and I are going to retire his number, just like they did all over Major League parks across our country. But before we do, we're proud that members of the Brooklyn Dodger team who had the honor of playing with Jackie Robinson have joined us: Tommy Lasorda. (Applause.) Don Newcombe. (Applause.) Clyde King. (Applause.) And Ralph Branca. (Applause.)

We're honored you're here. Thank you all for coming. Thanks for being a part of this special ball game. As a matter of fact, two of you are going to end up being first and third base coach. I wish you all the best out there. Looks like we've got some good players that have come to play.

I do want to thank John Warner, Senator John Warner, from the great state of Virginia, and his family, for joining us. Proud you're here, Senator. (Applause.) I see Alphonso Jackson and Dirk Kempthorne, of my Cabinet, who have joined us. I'm proud you all are here. Dutch Morial, thanks for coming Dutch, appreciate you coming -- I mean, Marc Morial -- there he is, Marc, how you doing, brother? He's the head of the Urban League. Roslyn Brock, vice chairman of the NAACP, has joined us, as well. Thank you all for coming. (Applause.)

We want to thank the Jackie Robinson Foundation for joining us today, as well as the YMCA and Boys and Girls Club of America for being here. Thank you all for coming. (Applause.)

I'm so honored that this game is going to be called by Karl Ravech, ESPN. Thanks for coming, Karl.

THE PRESIDENT: We really appreciate you taking -- you know it's a big game when Karl Ravech comes over to lend his talents. So you players are going to have to play hard, because you've got ESPN here.

Before we -- after we hang up the number honoring Jackie Robinson, after we retire his number here on the South Lawn, we will have Matthew Hearon, he'll be coming out, he's going to help us get the game kicked off. He's the first ball presenter. But before you come out, Matthew, the Hall of Famer and I are now going to hang up Jackie Robinson's number. Ready?