For Immediate Release
Office of the First Lady
July 12, 2007

MRS. BUSH: Thank you, Secretary Kempthorne. Thank you for everything you're doing to make sure all of our sacred icons, our historical sites, as well as our beautiful national parks, our natural national parks are protected.

I also want to thank Congressman Brad Miller from North Carolina and Congressman Michael Turner from Ohio, who are the co-founders of the House Preservation Caucus. Thank you both very, very much. (Applause.) 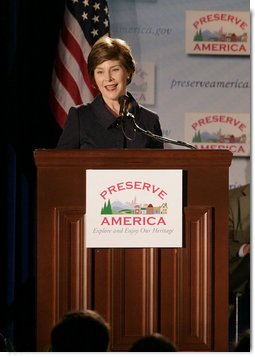 Members of Congress who are here, congressional staff, state and local officials, historians, preservationists, distinguished guests -- thank you all very much for coming, and thank you for your interest in our wonderful country.

Yesterday, our country lost one of its most dedicated advocates for natural and historic preservation: Lady Bird Johnson. As we remember her love of America's environment and history, it's appropriate that we're meeting here in the Cannon Office Building -- where her husband spent his early days in politics. And we're here today to talk about what each of us can do to build on their legacy of preservation.

The Cannon Building has also hosted its share of colorful stories. During Prohibition, the building had its own bootlegger -- (laughter) -- George Cassiday, who was known simply as "the man in the green hat." From the Cannon basement, Cassiday made regular deliveries to his House customers. (Laughter.)

In communities across the United States, structures like the Cannon Building stand as testaments to our nation's history. Monuments, national parks, and museum collections preserve the treasures of our environment and our culture. President Bush and I believe that all of us have the obligation to protect these resources, and to make sure that they can be enjoyed by many, many generations to come.

In 2003, President Bush launched the Preserve America Initiative to promote cultural and natural preservation, and to encourage a greater appreciation of our heritage. The goals of the initiative include a greater shared knowledge of our nation's past, strengthened regional identities and pride, increased local participation in preserving our country's cultural and natural resources, and support for the economic vitality of our communities.

Since President Bush announced the initiative, we've honored 16 outstanding preservation projects with Preserve America Preservation Awards. For the last three years, Preserve America has recognized a History Teacher of the Year, encouraging the excellent teachers who inspire their students' love of history by making history come alive in the classroom.

Last October, a Preserve America Summit was held in New Orleans to mark the 40th anniversary of the National Historic Preservation Act. The Act was signed by President Johnson in 1966, and launched the first coordinated federal effort to safeguard our country's heritage. At the Preserve America Summit, we took stock of the strides we've made over the last four decades, and we learned what businesses and foundations, educational institutions, governments and private citizens can do to modernize our preservation efforts so that they'll be more effective for the future.

With this designation, Preserve America recognizes communities that use their historic assets to educate visitors and local residents about their town's important links to our nation's past. One of the communities we're announcing today is Lafayette, Louisiana -- named for the Marquis de Lafayette, the French hero of the American Revolution.

When I was in France this January, I visited Ch teau La Grange, where Lafayette spent 30 years of his life. There, I saw the dictionary that Lafayette used on his first visit to the United States, and his personal copy of the Declaration of Independence. I saw the codes used between Lafayette and George Washington, and the small American flag that Lafayette took with him to prison, after he was arrested for his role in the French Revolution.

This year marks the 250th anniversary of Lafayette's birth -- and with help from its new Preserve America status, Lafayette, Louisiana, is staging a year-long celebration to honor its city's ties to one of America's first and closest allies. Bridget Boustany, the wife of Representative Charles Boustany, from Lafayette, is with us today. Where's Bridget? (Applause.)

Some Preserve America communities are using their historic properties to bring whole cities and towns back to life. One community we're recognizing today is Easton, Pennsylvania. You may be interested to know Easton probably has a link to your own early history: It was in Easton that cousins Edwin Binney and Harold Smith founded a business to manufacture slate school pencils. They expanded their line of products, and the first box of Binney & Smith Crayons -- containing seven colors -- was produced in 1903, and sold for a nickel.

Binney & Smith Crayons are now known by a different name -- Crayolas -- and since 1903, they've allowed children to express themselves in more than 400 different colors -- including, I'm sure, every one of us in this room.

In the 1820s, Easton was a bustling canal town, with flourishing tanneries, distilleries, and flour mills. But when the town's industries fell into decline, Easton's downtown went with them. Now a different industry has brought this city back to life: Heritage tourism is showcasing Easton's rich past, which dates back to the Revolutionary War era.

Today, residents of Easton celebrate Heritage Day every July, when they re-create one of the first and only public readings of the Declaration of Independence, which took place in Easton on July 8, 1776. Eastoners have formed a Historic District Commission, which protects the town's historic architecture. The Crayola Factory is now a museum, and part of Easton's revived downtown -- which attracts more than 300,000 tourists every year.

We're awarding $2.6 million in Preserve America grants today. Many of the recipients are represented here, and congratulations to each of you. These resources will help communities from Vermont to Hawaii share their treasures with visitors from the rest of our nation. They'll also be used to educate and instill a sense of pride in area residents. Just a few months ago, I visited Bridgeport, Connecticut, which is one of today's Preserve America grant initiatives.

Like Easton, Bridgeport was once a thriving center of industry, but it struggled in the decades since its manufacturers closed. Today, that city is on the rebound, and much of Bridgeport's economic development is tied to the city's rich history and culture.

One of Bridgeport's challenges, though, is to get the outside world, and its own residents, excited about the city's cultural renewal. In November 2005, Bridgeport was designated a Preserve America community -- and today, the city is receiving a $75,000 Preserve America grant to promote its historic resources.

Billboards and posters will advertise Bridgeport's cultural icons -- like the Bijou Theater, and the colorful P.T. Barnum Museum, which I visited in April. The city will produce maps for walking tours, which will guide visitors and Bridgeporters alike to historical collections at the Bridgeport Public Library, and through city parks designed by Frederick Law Olmstead. A virtual walking tour will be re-created online, on a new website that the city historian, Mary Witkowski, says will "send the word out to the far corners of the world that Bridgeport history is still alive and well, and worth finding out about." I think Bridgeport's mayor, John Fabrizi, and Representative Chris Shays are here in the audience with us. Thank you all for coming. (Applause.)

In communities across the United States, federal preservation efforts are restoring citizens' pride in their communities, and safeguarding our national treasures. I'm delighted to announce that President Bush has sent proposed legislation to Congress that will authorize two very important preservation initiatives: Preserve America, and Save America's Treasures. With support from the federal government, and through the generosity of private citizens, Save America's Treasures has awarded more than $313 million* to preservation projects in all 50 states.

These grants have protected the icons of America's past -- from the Sixteenth Street Baptist Church in Birmingham, to the first airplane the Wright Brothers kept aloft in Ohio.

President Bush and I appreciate the broad, bipartisan support from Congress -- that Congress has shown for both of these initiatives. This new proposed act -- the "Preserve America and Save America's Treasures Act" -- will improve our government's ability to protect America's historic places, objects, and collections for many years to come. President Bush and I thank you for your interest in this important work.

And we thank each one of you for the work you're doing to protect our nation's history and culture. Whether you're carefully cataloguing your town's cultural artifacts, or supporting our government's preservation work here on Capitol Hill, you're making sure future generations can enjoy the natural and historical treasures of their communities, and of our nation's.

Now I'd like to introduce someone who's at the forefront of these efforts: Ladies and gentlemen, the Chairman of the Advisory Council on Historic Preservation, John Nau.